Have you been wondering why your cute little Betta(s) flare their gills and fins? Well, you need not worry! Skimming through this article will provide you with detailed answers to your questions.

“Why do my Betta(s) flare their gills?” The gill flaring can be attributed to betta behavior. This is not some abstract phenomenon; it simply addresses how they are configured. It is of importance to note that bettas are warrior creatures by nature; hence they like to fight when the right stimulants (other bettas) visit their territory.

Bettas and their Dramatic display…

Having described that the betta is a “warrior fish”, I’m going to unravel facts about its psychology. You probably must have observed that your male betta flares his gills. Well, flaring is not so common with the female bettas.

Male betta always loves to register its presence and be in charge of its environment; when its sphere of dominion is threatened by the presence of another male betta, it reacts by flaring its gills. This just depicts the “macho” thing with masculinity.

When your male betta (or sometimes female betta) sights another male betta, the first reaction suggests that the “cute little thing” feels quite intimidated, hence it will try to man-up and take charge, by stretching out all of its fins as wide as it can and also its gills.

The stretching out of its gills displays its delicately placed membranes.  The whole “betta drama” confers on it a size that measures up to twice its original size. It is a simple way of telling the other betta “I’m bigger and stronger than you are, so back off my territory!”

This whole betta drama is what is called “FLARING”

It becomes a little bit quite interesting if the other betta has the same “bad attitude” as the first betta, so it will respond by equally flaring its own fins and gills and before you know it, they might aim at taking a “peck” at each other’s fins.

If there is one thing to learn from this petty drama, it is that you should never try to put two male bettas in the same tank, if you don’t want them pecking at each other’s fins; because the display of territoriality can actually go on for hours-I mean, it can be that bad. 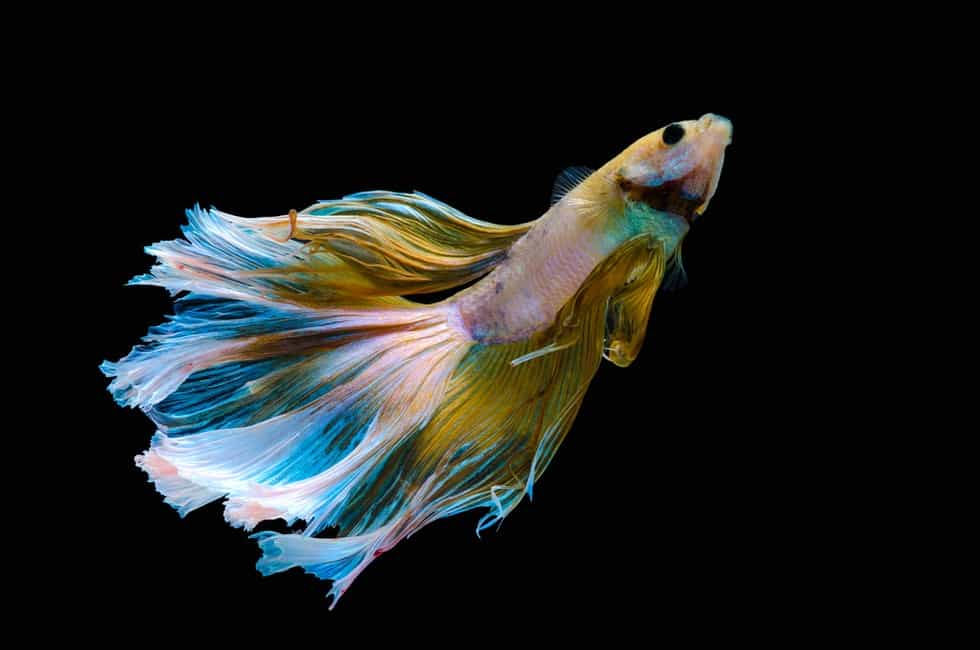 You can only put two male bettas that grew up together in the same tank; at least they would be so used to each other and get along well, like brothers or best friends.

Male and female bettas in the same tank do not stir up unnecessary gill flaring; they get along together like a pack of great friends. The problem is simply two strange males in a tank.

This flaring can also occur when the bettas see their own reflection. Seeing its reflection causes it to think “oh, who is the newbie trying to come into my house?” and then it goes all gill and fin flaring, trying to prove that he furnished the house for itself and he owns everything in it (I know it sounds very amusing).

Whenever you feel like entertaining yourself, you can place an actual mirror in front of your betta so you can watch his color intensify and his aggressive showiness of all he has (with the fins and gills), or you can jar your male bettas side by side (they still flare at each other this way!).

If you feel your betta is a little lethargic, you can move him into action by keeping him company with a new neighbor of the same species, right in an adjacently placed jar; this way they would flare at each other for hours and they also will not be able to peck at each other’s fins.

About the aggressive behaviors?

There are still a lot of things to know about the aggressive behaviors of bettas. As babies, the fry shares the space in the tank peacefully; there is usually no gill and fin flaring at this stage.

However, as they grow bigger in size and age, as their fins begin to grow, they start the display for one another and the aggressive behaviors find expression.

The females can tolerate each other; so they can be left to grow together for as long as possible.

There are different betta strains and the aggression varies across the kinds of strain. Some beta strains are quite peaceful, accommodating and can live in groups while others are not.

When the bettas are assembled into a form of “community” or “school”, they establish what is called “a pecking order” –it is simply a means to ensure there is always peace and unity. The “pecking order” establishes one dominant betta fish as the leader, who will boss everyone around.

Most times, the largest male or female betta fish takes this position. We can call this large fish “the Alpha fish”.  The Alpha fish makes sure that everyone does “its chores” in due time (of course, they have no chores to do!) and that nobody takes up the role of being a “bad betta fish”.

For as long as the Alpha fish remains in the tank, there is usually order and serenity. This balance is distorted when there is an introduction of new sets of betta fish.-the gin and fin flaring begins and fights to ensue; all in a bid to establish a new “Alpha fish”.

Once the new “Boss” is elected, peace returns and everybody becomes good again. I find the betta behavior quite interesting and I know you do too.

You guessed right! These bettas are quite a handful and they possess unique personalities. Although they can be friendly, they can also exhibit some “funny” attitudes.

Betta can sink into depression if it feels so lonely especially if it was taken out of the “school” it was used to and jarred separately. They can express depression in different ways, they might refuse to eat and decide to starve to death (it can be that serious).

Expression of personality difference can also be observed in their feeding styles and methods. While one betta might happily feed on a brand of pellet, another might just simply refuse to even have a look at that same brand of pellet.

Some bettas have the amazing ability to watch television with their breeders; they know when the television is switched on and they can swim to the end of their bowls to gaze at the color and images projected on the screen (isn’t that brilliant?).

They are fast learners; they can easily recognize their breeders and look forward to their return from work because they enjoy getting the attention of any sort.

They can get so used to your hands such that they can come swimming towards it on sighting it. Their ways are really beautiful; they also know how to roll up some bags of tricks!

Why does a Betta fish puff out its gills?

A Betta fish can puff out its gills when it wants to flare them. The puffing out of the gills exposes its membranes. It mostly does this puffing out as a response to intimidation or as a means to enforce its presence.

Why does my betta keep flaring its gills?

The flaring of the gills exhibited by your betta is a response to a stimulant which might mostly by the presence of another male betta in the same environment.

If you keep your betta(s) in the same jar, they can flare their gills continuously at one another to establish “territoriality” they might even proceed from there to aggressively trim each other’s fins by pecking at them.

Sometimes you betta can also flare its gills on sighting another betta fish in an adjacent jar. Bettas have the nasty attitude of wanting all of its space to itself especially if it did not grow up in the same school as the other Betta.

Some bettas can be very unsociable, and if your betta belongs to that class it would not want any other male betta to reside in his territory-hence the continual gill flaring.

At other times your betta fish might flare its gills when he sees his reflection. Since he has no idea about what he looks like,  he just assumes that the reflected image represents another male betta so it seeks to show off “what he can do” by flaring. You can adjust the lighting to make sure that all forms of reflections are taken care of.

Is flaring bad for bettas?

Flaring can be actual fun on your path but if it spurs your male bettas to real physical combat, then it won’t be safe. However, if it is just continual flaring, be rest assured that it’s not a bad thing.

Hi so about 2 weeks ago I got a male and female beta fish and they seemed to get along great at first to where the male was actually preparing to court her when he built a bubble nest. But the day I realized this I came home to find out the male was dead (i'm guessing the female declined his courtship). I decided to get a new male but when I let them get in the tank that has a divider the FEMALE started flaring her gills at him. The male has been acting perfectly calm and backing off whenever she flares her gills. Right now I have them in separate tanks but I would ultimately like to keep them both in the 10 gallon tanks. Is there anything I can do to at least make them tolerate each other?

You should check this article for more information.

I just got a betta fish about a week ago, he is perfectly happy and healthy. today I decided to change his water for the first time since ive gotten him, I put him in the little cup that I got him in as I changed the water (which I may not do again considering this all happened after I put him back in the tank.) once I put him back in the tank he began flaring at his own reflection I tried to distract him by hanging out around him since every time he would see me he stopped flaring. but then he would go right back to his reflection, it lasted a couple of hours and I started doing research about if it was bad or not. I dont want to stress him out and so I put a white paper on the side that he was seeing his reflection and he finally settled down. should I keep the paper up or is it okay to take it off? will he get used to his reflection? this wasnt happening before.

Hey yoana, you can remove the paper and let him get used to his reflection, but if the flaring goes for hours, you can try to move the tank or adjust the lights to eliminate the reflection. Don't leave the light ON longer than 8-10 hrs a day and make sure the room is also lit up properly. You can try adding some bushy plats to block the refection or cover the aquarium wall with matte background.