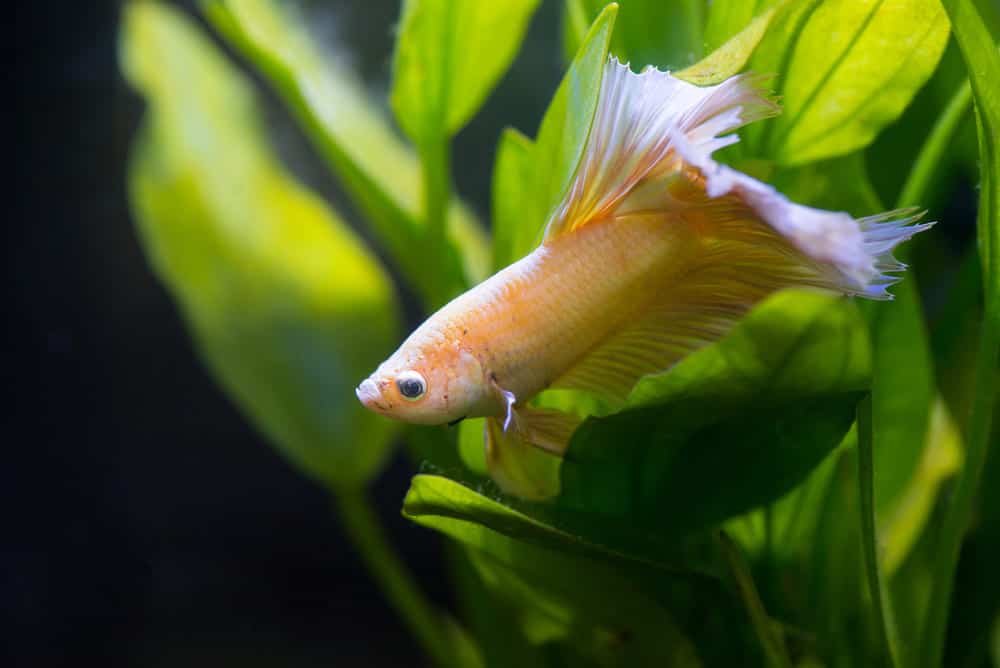 Betta fish also referred to as ‘The Siamese fighting fish‘ is a small, tropical, colorful fish that can be found in Southeast Asia. And is very common in the pet trade.  The Betta got its name from a long line of ancient Asian warriors called the ‘Bettah.’

Betta fish are well known for their brilliant colors. However, they sometimes lose their beautiful blue, red, or green color and it fades to white. What does this mean? And most importantly, is it deadly?

Why is My Betta Turning White? If your betta fish turns white and refuses to eat, it could be an indication of several diseases. However, it could also just be a regular part of your Betta’s genes and growth.

In this article, we will learn why a Betta fish color may turn white and refuse to eat, what signs to look out for as symptoms in case of illness, the cause of such disease, and the treatment for it.

Causes, Symptoms, and Treatment for Whiteness

Stress is a common cause for whiteness in Betta fish and can easily be resolved by ensuring that other fish in the tank are not attacking the Betta fish.

Also, ensuring that the fish can’t see its reflection and that it is being kept in water whose temperature is between 78-80 0Fahrenheit, can prove very helpful. Always make sure that the water temperature never goes below 74 0F and above 86 0F.

Body flukes may also cause whiteness in your betta fish.

A fluke is a common type of parasite that can be found in aquarium tank water. If your fish is healthy, its immune system ought to be strong enough to combat the fluke. But if the fish becomes diseased, stressed, or if the water quality plummets, fluke populations can rise and infect your fish.

Body flukes are white in color and can generally be seen with the naked eye. They are several millimeters in length and very thin. If there are several of them, it may just look like your Betta is turning white.

Anti-parasitic treatments are very effective against flukes. Praziquantel is a great treatment for this and can be found in several medications such as Prazi-Pro and API General Cure.

This is another type of common parasite that can cause whiteness in your Betta fish.

It spreads quite quickly and has a relatively long life-span. The consequence of this is that treatment must last for at least a month as the young cysts can hide in the substratum for extended periods.

One blessing that comes with Ich being common is that nearly every pet store that sells fish will also sell Ich medication.

Ich is easy to recognize as it resembles white dots all over the fish. So if your Betta fish looks like something dipped in salt, you had better check it out cause it just might be Ich.

Costia is another parasite that can cause whitening in your Betta fish. The parasite rarely affects tropical fish though, and so there are not many medications specifically adapted for Costia.

However, the good news is that most Ich medications will work on this parasite because the two parasites are similar. Costia though would definitely make the Betta look white all over, or at least extremely cloudy.

The ‘cottonmouth disease’ is another frequent cause of whiteness and loss of appetite in the Betta fish.

The infection is caused by the  Columnaris bacterium, Flavobacterium columnare. It is an extremely aggressive bacterial infection that closely looks like a fungus.

If you happen to see a fluffy white patch on your Betta, the best thing to do is to check it out as it could be Columnaris. The bacterium has been known to kill fish in 12-96 hours, depending on the strain.

A fish can show symptoms of the bacteria by having frayed and ragged fins.

This may be followed by the appearance of ulcerations on the skin, subsequent epidermal loss, identifiable as white or cloudy, fungus-like patches – especially on the gill filaments, and refusal to eat.

Mucus may also amass on the gills, head, and dorsal regions.

Gills will change color, either becoming light or dark brown and may also exhibit necrosis. Fish will breathe rapidly and laboriously as a sign of gill damage. Anorexia and lethargy are common, as is mortality, especially in young fish.

Some fish may show symptoms of this disease, while others will die quickly without showing any symptoms.

The best way to combat it is a combination of Furan 2 and Kanaplex or Maracyn. This disease is usually introduced by unquarantined tanks and can enter the fish through the mouth, gills, or small wounds.

The condition is prevalent where the tank fish tank is overcrowded or where there is a low oxygen level in the water.

Lymphocystis may be another reason for your betta fish turning white. Perhaps the worst thing about this viral disease is that it currently has no cure.

The fish may show symptoms by growing small pink or white lumps on their fins or skin in the early stages.

This often makes people confuse it for Ich. After some time, the lumps clump together to form a cauliflower-like growth on the skin, mouth, fins, and occasionally the gills. Eventually, the growths inhibit the fish’s ability to swim, breathe or eat, and secondary bacterial infections usually kill the fish.

Usually, the best treatment is to simply give the fish a stress-free life and a weekly bacteria treatment. Then the virus will slowly subside and the fins will repair themselves. This can take many months.

Like most viral infections, the first outbreaks are the most serious. While the immune system learns how to suppress it, the outbreaks become less severe over time assuming the organism survives the initial outbreaks.

Sometimes the symptoms may abate on its own, but it is also possible for the lump to reappear. Lymphocystis is contagious; thus, it is advisable that if one fish is exhibiting symptoms, it must be isolated from other fish to avoid contamination.

Body rot or fin rot is another reason why a betta fish may turn white. In several instances, body rot happens after the fin has rotted away entirely, and the rot then extends to the other parts of the fish’s body.

Fin rot usually occurs in Betta fish with long fins because their fins are so long that the circulation of blood to the edges is often poor. This can lead to flesh rotting and becoming infected with both bacteria and fungus.

The best treatment for body rot and fin rot is Methylene Blue dips and baths along with strong antibacterial medications such as Kanaplex.  However, if fin rot is allowed to go on long enough for it to reach the body, chances of survival are not very good.

Does All Whiteness Amount to Whiteness?

No. It’s not every whiteness in your Betta fish that amounts to illness.

This is because sometimes the mere shedding of your Betta fish’s slime coat may also cause it to turn cloudy and whitish either in some parts of the body or all over it. The presence of excess slime coat will also have such effects.

Medication can’t be employed to treat this but it is normally caused by an irritant in the water.

The most common one being salt, lotions, aerosols, and soap. The best thing to do in such instances is to change the water and replace it with water free of irritants.

Bettas may also have what is known as marble coloration.

This is not a harmful reason for your Betta’s color change. If it is just a few scales that are turning white, then it is likely that your Betta has the marble gene. If the change continues, especially if other colors become a part of the change, it is most likely simple marbling.

What If Your Betta Refuses to Eat?

Your Betta’s refusal to eat can be as a result of any of the diseases mentioned above. However, sometimes fish refuse to eat because they’re fussy, stressed, or overfed.

Low water temperature may slow the fish metabolism resulting in it eating less. You also might be offering the wrong type of food or keeping the tank in an unclean state.

Provide the fish with protein-rich and meaty food. Pre-packaged meals such as brine shrimp, live bloodworms, and specially formulated pellets will meet the nutritional requirements of your Bettas. And keep it in top condition.