If you love taking care of water-dwelling beings, chances are you want to keep more than one type of fish together. However, you might be unsure about whether they would survive well together. The most common fish that are kept as pets are goldfish and betta fish.

Now, to answer the primary question – can betta fish and goldfish live together?

The short answer is, no. Although Betta fish and goldfish can essentially live together, it is highly advised otherwise. Apart from the normal temperature, to pH level, there are several reasons behind this fact.

Read on to know more!

Can Betta Fish and Goldfish Live Together?

“They are just fish, they live with each other in the ocean, what could go wrong in a tank?” – Well, a lot could. Betta fish and goldfish vary from each other majorly.

From different feeding habits to different temperature needs.  Although betta fish and goldfish can coexist, keeping them in one tank is highly not advisable.

Betta fish and goldfish can live together, but the owner will always have to be on the edge to make sure everything is proper as both fish have highly different requirements. 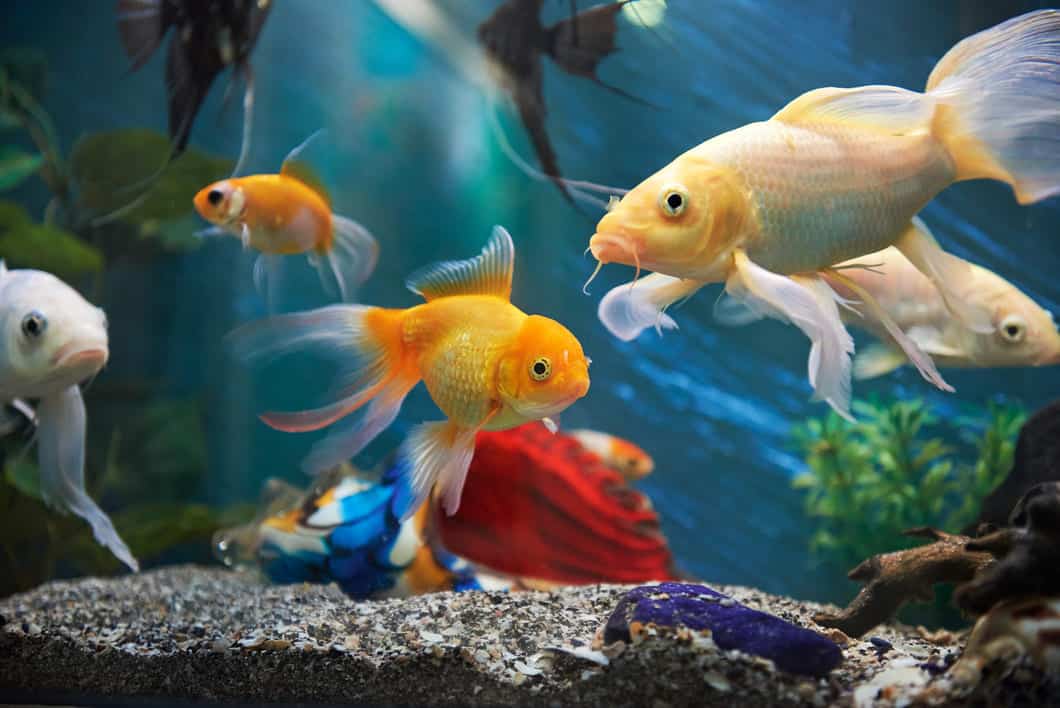 Some of the main reasons why Betta fish and goldfish cannot live together have been listed below in detail for better understanding.

Goldfish are considered to be cold-water fish and thrive in low temperatures around 65 degrees Fahrenheit to 75 degrees Fahrenheit. Therefore, it is pretty evident that your goldfish surely will not require a water heater. However, your betta fish will require one. Therefore, it is not possible to house both betta fish and goldfish in the same tank.

Fish, like human beings, have quirks and therefore must not be kept with fish of colliding interests.

Goldfish are known to produce an increased amount of waste, which leads to high levels of ammonia in the water, causing a threat to betta fish in the tank, if any. Due to this habit of the goldfish, the water of the tank needs to be changed frequently.

Although cleaning the dirty tank daily is a necessity, frequent changes in the water that is home to betta fish might distress the fish. Goldfish can also be bad fin-nipping agents, and that does not sit well with the delicate and long fins of the betta fish.

The short-tempered betta paired with a goldfish will only lead to war in the fish tank!

Betta fish are carnivorous fish that thrive on small insect larvae in the wild. However, goldfish are omnivorous and require both vegetation and protein to survive.

The type of food that betta fish consume is not recommended for goldfish and might cause chaos in a water tank.

Accidentally feeding your betta fish with goldfish food will result in horrific results and dangerously affect your fish’s life! Although betta fish enjoy comping on plants in the aquarium, they will rarely touch the food of the goldfish in such a condition.

Betta fish and goldfish do like aquarium decorations but their taste varies vastly. Their wants are pretty much at the opposite ends of the spectrum.

Betta fish prefer tanks that are densely planted and have numerous resting or hideout places for them. However, goldfish enjoy tanks that have a lot of open space for them to roam around in.

Betta fish need a cozy and well-decorated tank. If you are planning to make your betta fish happy by placing tons of small rocks, plants, driftwood, etc. in your tank.

Unlike goldfish, betta fishes are somewhat aggressive and attack other fish if they come too near them. Even if the tank is divided in half, betta fish are usually aggressive and will end up attacking each other if provoked. Goldfish, on the other hand, is an extremely peaceful fish that like to live alone.

Betta fish attack other colorful and vibrant fish as they threaten the bettas. Goldfish, being pretty colorful, tend to provoke the bettas and cause the latter to attack them! 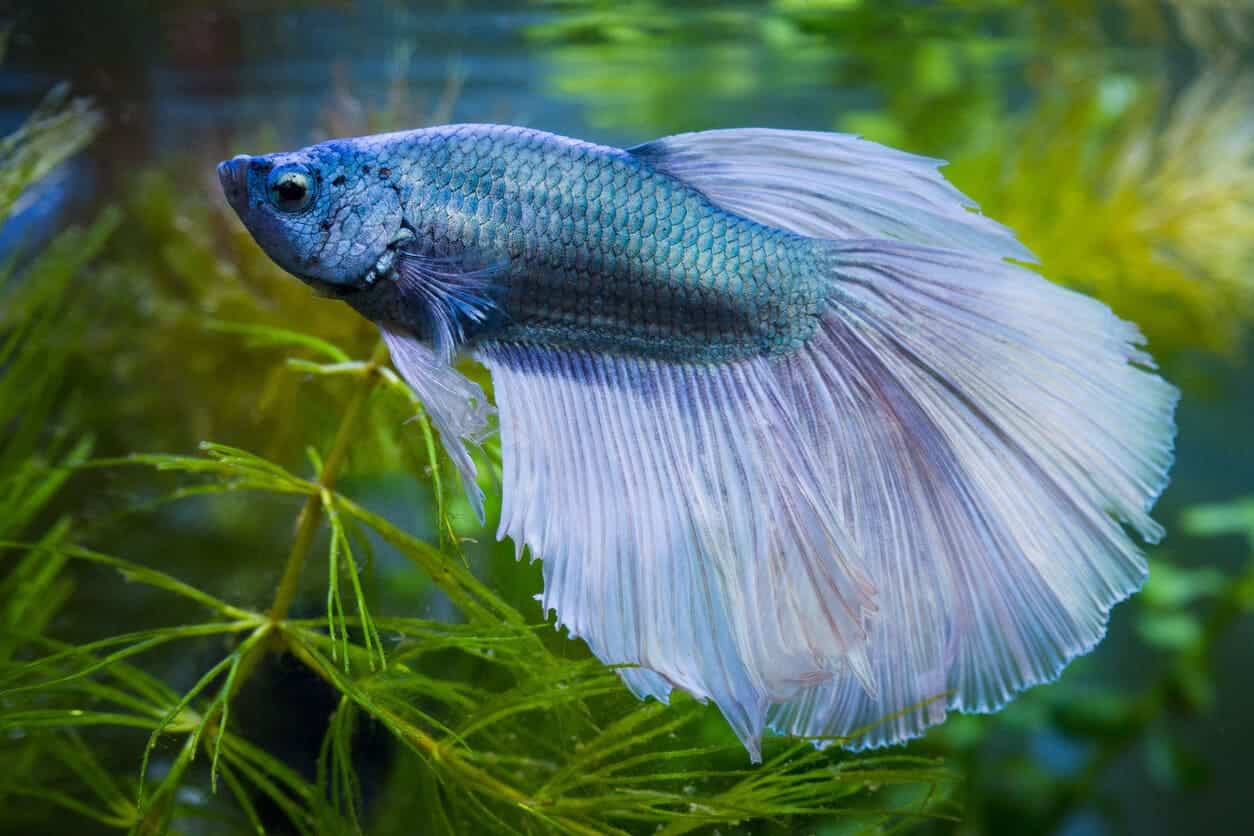 The water flow in an aquarium vastly affects the moods and behavior of the inhabitants it houses.

However, the strong force of such a filtration tank will not be suitable for the betta fish in the tank and will end up causing trouble for them.

Extremely strong filtration systems cause trouble for betta fish to swim properly and affect the way their long and delicate fins flow. Betta fish require no current or low current to be able to swim in the water.

Another important thing to note when keeping your betta and goldfish together is the cleanliness of your tank.

Goldfish do not have a stomach and tend to drop a lot of waste in the fish tank. Due to the droppings of the goldfish, your tank will always be susceptible to ammonia poisoning, which can quickly affect your betta fish. Thus, killing them in the process!

The only way to avoid ammonia poisoning is to clean your fish tank frequently. However, even this can create problems as betta fish are very delicate and can be easily stressed out due to frequent cleaning. Such a stressful routine for your betta can cause them to fall ill as it hurts their immune system.

Betta fish are a smaller variety of fish and normally grow up to 2 to 3 inches in size, thus a 10-gallon tank will be more than enough for them to thrive well.

Although betta is small fish, they do not deserve the bare minimum which is a 2-gallon tank, and should have enough space to roam around in the tank.

A goldfish, however, reaches up to 6 inches when fully mature, and will require a 20-gallon fish tank to thrive. Besides goldfish are a destructive species and a fish tank home to betta fish containing several plants, will not survive for long. Goldfish tend to uproot plants in an aquarium and forage through the substrate to locate food scraps.

Will a Betta Fish Eat a Goldfish?

Keeping a betta fish and a goldfish together in the same tank will not result in the betta fish gulping the goldfish down, because the former has a smaller mouth. Although bettas are carnivorous, they thrive on insect larvae and will not be interested in munching on a goldfish.

Goldfish, however, have a habit of nibbling on the fin of other fish. If kept in the same fish tank, goldfish will end up nibbling on the long, delicate, and colorful fins of the betta fish. This behavior might stress the betta out and provoke a fight between the two tank mates.

What Kind of Fish Can Live With a Betta Fish?

Even though betta fish are known to be fierce fighters and can be pretty aggressive towards their kind and others, there are a few fish that the betta can tolerate.

The following fish can live with the betta fish. 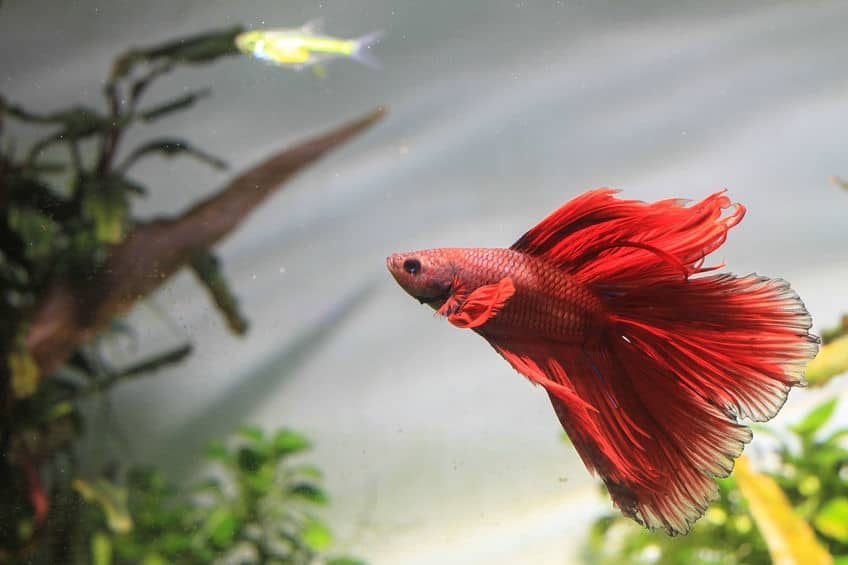 These eel-like fish can grow up to 3 to 3.5 inches and usually scavenge food scrapers that are dropped by the betta fish.

Kuhli Loaches are nocturnal and will sleep away most of the daytime and swim around during the night. Due to their nocturnal nature and unique ‘shifts’, these fish can be a perfect roommate for your betta fish.

These tiny orange shark-looking fish live well in any aquarium that is 10 gallons or larger. These are fish that live well when kept with a school of their kind, also helping with the aggressive nature of the betta.

When in schools, it makes it harder for the betta fish to single out a particular Ember Tetra and cause a fight. They are gentle and carnivorous.

The Malaysian Trumpet snail is one of the best tankmates for the betta fish since they are mostly active during the night and make burrows during the daytime.

These hard-working snails even clean up the tank by cleaning algae off the tank glass and eating organic residue in the tank. The behavior of the snail to be more active during the night sits perfectly to not attract any attention towards themselves from the aggressive betta fish.

This tiny and peaceful fish with a striking orange body with distinct black triangular patches make them stand out in an aquarium easily. Rasboras survive best in schools of fish, and their peaceful non-threatening nature makes them a perfect tankmate for your betta fish.

Another fish that likes to live in schools of fish, these beautiful fish are bottom dwellers and feel safe around their kind. They grow up to 3 inches as an adult.

These fish normally stay in the bottom section of a fish tank and eat scraps of food that falls as food residue to the bottom of the tank.

Can Betta Fish Live With Other Types of Fish?

Betta fish can be kept with other fish in a fish tank based on the personality of the betta fish. If it is a friendly fish, it can survive well with other fish as its tankmates, otherwise, it is probably not the best idea to keep them with other fish except for very peaceful ones.

Make sure that the fish tank used to house them is at least 10 to 20 gallons and well equipped with plants and hiding places.

You should also note that betta males should not be put together as they will fight to the death due to their territorial nature.

Bettas can be kept with fish that have dull-colored skin as bright-colored skinned fish make the bettas aggressive. Fish like corydoras catfish are the perfect companions for your betta fish, as the betta will normally just ignore the corydoras and be on their merry way.

You should avoid fish that have long and flowy tails as that threatens the betta fish and triggers them.

Can a Betta Fish Kill a Goldfish?

Betta fish will not kill your goldfish. However, a betta fish might likely attack a goldfish as goldfish tend to nibble on the long and elegant tails of the betta. This might provoke the betta and cause them to attack the goldfish.

Can a Female Betta Live With a Goldfish?

Although certain betta fish can live with goldfish, it’s advisable to not keep the two together. Female betta fish are not comfortable around goldfish for reasons such as space, food preferences, territory, etc.

Can a Fantail Goldfish Live With a Betta?

Fantail goldfish is extremely friendly and does not provoke betta fish like its main species. These goldfish are known to be pretty intelligent and therefore can survive in the same fish tank as the aggressive betta fish.

Betta fish and goldfish can essentially live in the same tank, but it will be very challenging to maintain a high quality of life for both creatures. Therefore, it is advisable to keep the two separate. It will be undoubtedly challenging and the owner will always have to be on the watch for a fight between the two creatures.

Therefore, it is better to keep the two fish in two separate tanks for their safety and quality of life. These fish should be kept in their environments as they are both excellent pets individually.