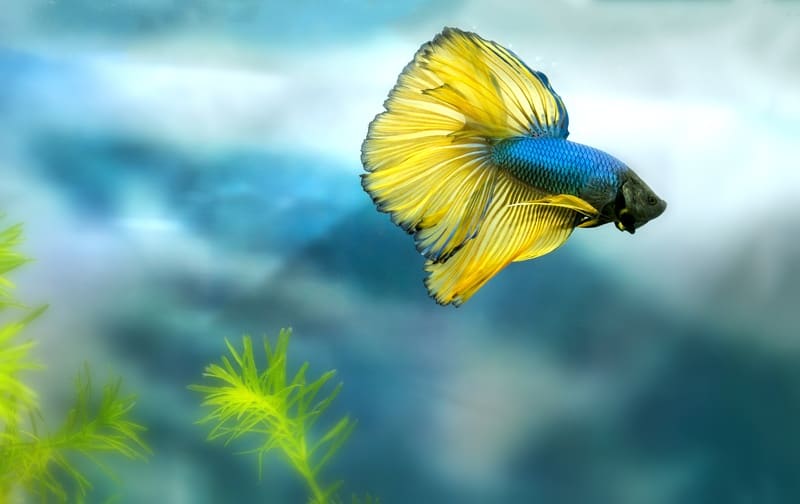 Guppies are possibly the most common aquarium fish in the trade today.

Not only do they come in a small package, but they also come in many colors and variations. And that’s not it, they’re also very easy to care for!  However, things do get boring after a while and a trip down to the local fish store draws your attention to another fish.

Can Guppies Live with Bettas? The short answer to this question is, yes, absolutely! Both fish have similar care requirements and come from water sources of similar parameters. Having said that, however, there are many factors we need to look at and consider before placing a betta into a guppy tank.

The betta in the corner, its vibrant colors, majestic finnage and ease of care have lured you to consider, whether or not the betta would be a suitable addition to your tank of guppies.

Curiously enough, bettas (most at least) are not very much bigger than guppies and share many of the same care requirements. In this article, we’ll take you through the ‘Do’s’ and ‘Don’ts’ of keeping bettas. So be sure to read till the end. So can guppies live with bettas?

But before we dive in, let’s take a look at the betta fish and its behavior, so we know what to expect.

For those of you that don’t know, the betta (Betta Splendens), also known as siamese fighting fish, or fighting fishes, is a beautiful species of fish that originate from Southeast Asia.

The betta is a labyrinth fish, which means they have the ability to extract oxygen from the air.

They are also members of the gourami family! In the wild, bettas generally inhabit stagnant pools of water or slow-moving streams with low oxygen content, which is where their labyrinth organ comes in handy.

Bettas get their nickname “fighting fish” because of the males being very territorial and tend to get aggressive with another male in close proximity.

These displays of aggression are the main reasons why they are commonly called fighting fish.

These behaviors are commonly seen in both the male and the female fishes, however, within females, this response or aggression, is on a much lower level.

They grow to an average of about 3-3.5 inches at maximum, with many colors and fin varieties. It is not difficult to see why fighting fishes are such a popular pet fish as well.

Fighting fish are carnivores and feed on mainly mosquito larvae, worms, and other small invertebrates in the wild.

For this reason, it is important to note that, while not picky eaters, they should be fed a high protein diet. Most commercially available pellets will induce a feeding response, but be sure to check!

Occasional treats such as tubifex worms, blood worms, and black worms should also be included in order to ensure a balanced diet. Balanced diets not only keep the fishes healthy but is said to bring out the best colors in them!

Male bettas generally show aggression to other male members of the same species. Although responses for these interactions may vary, it is very likely that 2 male bettas will fight to the death if given enough time.

Additionally, these responses of aggression seem to diminish with other species of fish when given adequate space and hiding spots.

Females, however, survive well in a group and will form a hierarchy. While aggression is still shown at times, female bettas generally do well in groups.

Generally, male bettas are not as active swimmers as guppies are, preferring slow and gradual movement.

It is also not uncommon to see male bettas housed in rows of jars, which seems to indicate that they require a very small volume of water to survive.

While that has some truth to it, due to its labyrinth organ, it still is very much recommended that you keep a betta in at least a 2-gallon tank for 1 adult fish.

Keeping bettas with guppies is not a difficult task. While guppies spend most of their time in the front of the tank, bettas are more reclusive and will generally stick to their corner of the tank.

It is important to note that if you provide sufficient cover and hiding spots, the chances of the newly added betta showing aggression reduces significantly.

Some betta variants are more aggressive than others. This is usually subjective to the individual fish, it is very important to keep a watchful eye when you first introduce the new betta.

It is also very important to provide enough space so that the fishes do not feel stressed or threatened.

It is important to provide as much cover as you can in a tank so that the betta has ample hiding space without feeling threatened by other fishes that share the same tank.

That said, these are just guidelines to follow and problems sometimes still occur in tanks.

What is The Best Way to Add Them Into the Tank?

Adding betta into a tank of guppies is not much different from adding any other fish in the tank.

First, make sure you have a spare tank available as a backup just in case you need to remove the betta. Second, make sure that the addition is gradual as temperature with most likely cause shock and can kill your fish.

Once the betta is in the tank, make sure you keep a close watch on the tanks inhabitants at least for the first few days. Observe for any signs of stress in both the betta and the guppies. If there are any signs of stress, take the betta out and isolate it for a few days ensuring that it is healthy and stress-free, before trying again.

Occasionally the betta might flare at the guppies for straying a little too close however do not worry as this is normal, as long as it does not happen too often and no injuries (like nipped fins, etc) occur.

The most important factors here is to observe the tank and to make sure all the inhabitants aren’t only stress-free but also eating well and in good health. Remember, at the first sign of stress, be prepared to remove the betta.

What are some of the common problems with bettas in community tanks?

Bettas tend to display traits of aggression and hostility when threatened, or when they feel their territory is infringed upon. These displays of aggression although commonly are meant to chase other fishes away can sometimes build into more serious altercations like biting and eventually killing the other fish.

Depending on the level of aggression displayed, keepers should be ready to respond immediately. The proper action for serious levels of hostility should be to remove the betta completely and let it live in isolation. But for mild cases of hostility, keeping a close eye making sure no other fish gets injured would be an appropriate course of action.

Bettas are easily stressed fish and in a community tank, they are sometimes a target for bullying. Fishes with fin nipping tendencies often stress bettas out as they are generally slow-moving. This, however, is usually solved by ensuring there are ample space and the fishes well fed. Again, if you feel that your betta is showing signs of stress i.e torn fins, pale color, please remove the betta from the tank as soon as practicable.

What if the betta starts chasing my guppies?

While chasing is a sign of aggression. This usually happens when the guppies stray a little too close to the betta infringing on its space. Most of the time, this is only a reaction from the betta and is not something to worry about.

However, that said, if your betta is actively chasing and showing aggression, it is best to remove it.

Why does my male betta always blow bubbles on the surface of the water?

This is actually called a bubble nest and is created only by male betas with their saliva. The purpose of the bubble nest is to serve as a place of protection and incubation for their eggs. Males will often make bubble nests regardless of whether there is a female present. This act is also a sign of good health and stability.

What varieties of bettas are there?

There are actually numerous betta varieties out in the trade today thanks to the many breeders of this particular fish. However, most of these varieties revolve around a few variations of the fish.

Below are some of the common variations of the fish without going too much into detail.

Keeping guppies and bettas together is not too difficult. Remember that ample space and keeping your fishes well-fed are keys to ensuring the survival of both species of fish in the same tank.

I hope you’ve enjoyed this article as much as we enjoyed writing it!