Do you own a goldfish and wonder if it needs a heater for survival? Yes! Depending on the type. Although numerous people argue that a goldfish is a cold-water fish, some types of goldfish require a heater such as a fancy goldfish.

Why is it important? Well, a fancy goldfish immune system is quite delicate. As such it is prone to numerous infections if kept under cold water below 60s F.

So, you want to know which type of goldfish requires a heater? Read on! Below we will discuss in detail the different types and why they need heated water. Ready? Let’s cut the chase!

Types of Goldfish that Require a Heater

As earlier mentioned, not all goldfish require a heater. The regular pond goldfish can do well in cold water. However, if you keep it in an indoor aquarium and the temperature dips below recommended levels, then you can opt for an aquarium heater.

Basically, all goldfish thrive in temperature between 60 degrees F and 70 degrees F. Common goldfish can even thrive below 60s F and even in freezing water.

This is because their metabolism is reduced, become sluggish and ultimately hibernate. However, fancy goldfish cannot survive in such low temperatures. They can easily die if the temperature dips below 60s F.

Having said that, the fancy goldfish – which is mostly kept for display – requires a heater for survival in most cases.  So, which type of goldfish are we talking about?

Phoenix is a rare type of fancy goldfish. It is by few fishkeepers but thrives within the same range of temperature – 65s F to 72s F. Make sure to adjust the heater accordingly.

Fantail goldfish is an ideal fish for beginners. It thrives in temperatures between 75 degrees F and 80 degrees F just like its fellow family members. An aquarium heater is necessary to keep the temperatures at this range, mostly in the night.

Bubble eye is a very delicate type of fancy goldfish. It requires temperatures between 70-80 degrees F. in fact, they are so sensitive to temperature changes, more so low temperature. As such, putting them in a goldfish bowl is a no!

Orandas are very susceptible to temperature shocks. They do not tolerate cold water and their water temperature must be kept constant – 65-72 degrees F. for optimum temperature control and growth keep them in a 20-30 gallon tank.

Lionheads are strong goldfish but prone to immune complications if kept in water temperatures below 60 degrees F and above 75 degrees F. as such, a water heater is ideal for keeping levels between 62-72 degrees F.

This Japanese breed requires a water heater for optimum growth. The water temperature ought to be between 60-70 degrees F. Other fancy goldfish that require aquarium heaters include Tosakin, Pom Pom, Froghead, Celestial Eye, Butterfly, and Izumo Nankin.

The main reason why they require a heater is that their immune system becomes weak in cold water.

Let’s look at some commonly asked questions and answer them accordingly.

Can you put goldfish in a heated tank?

Basically, goldfish can survive in a wide range of temperatures. They can thrive in a heated tank as they can do in normal room temperatures. However, for fancy goldfish the water should not be heated over 75 degrees F. this is because they thrive in temperatures between 60-72 degrees F.

Therefore, putting your goldfish in a heated tank is okay, just observe the temperature. 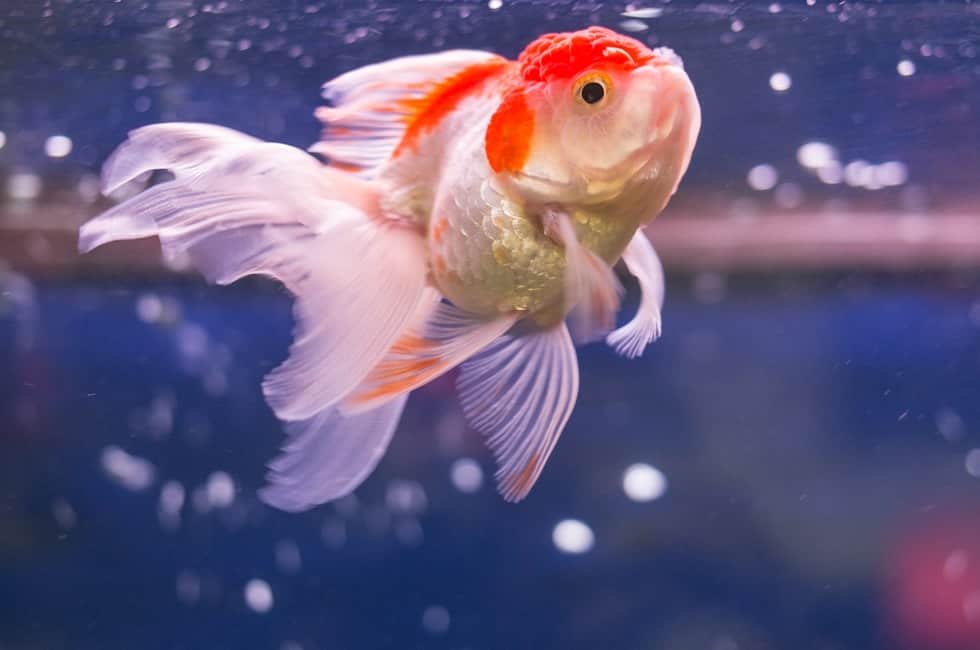 Do goldfish need a heater in winter?

Common goldfish do not necessarily need a heater in winter. Why? They are cold-water fish hence can tolerate temperature cooler than 22 centigrade. However, you should consider a heater if your aquarium is outdoor as the temperature might fall below 1 centigrade.

Additionally, fancy goldfish require a heater in this season because they are prone to infections in temperature below 60 degrees F.

It is, therefore, safe to say that they require a heater should temperatures dip below 10 centigrade.

What temperature does a goldfish need to be in?

A goldfish can thrive well in temperatures between 60s F – 70s F. moreover, they are cold-water fish hence can survive in a wide range of temperature. This is possible if the temperature does not change quickly.

While normal goldfish can thrive in temperatures even lower than the recommended, fancy goldfish can only thrive within the 60s F – 70s F range.

Do fantail goldfish need a heater?

The fantail is a fancy goldfish and therefore require a heater. Why? They can easily die or get infections if the temperatures fall below 60 degrees F. as such, a heater is essential to regulate the temperature.

If you live in areas where the temperature dips at night, you should consider purchasing a heater and installing it in your tank to keep the temperature constant. However, in months such as summer and spring, it is not necessary to install a heater in a fantail tank.

Which is the best heater for a goldfish aquarium?

Well, most fishkeepers are aware that there are dubious heaters out there which are in most cases problematic. And you all can agree that replacing a heater can be expensive.

The worst case scenario is when your heater explodes in the tank. You lose your heater and ultimately the goldfish might die. Double tragedy!

Therefore, finding a heater that fits the bill is necessary. Thankfully, we found the best one, Fluval M Submersible Heater.

The heater easily blends with the color of the aquarium, comes with an easy to use dial, holds the set temperature, and has a blue indicator that lights when it is heating the tank.

Do I need to install a heater in an outdoor pond?

It is not necessary to install a heater in an outdoor pond, especially if it’s the normal pond. Goldfish can thrive seamlessly in the water temperature. In fact, the temperature of the fish is parallel to that of the water.

During winter, it is also not ideal to install a heater in an outdoor pond. In fact, such low temperatures are ideal for a common goldfish to thrive in. do not install one even if the top of the water freezes.

The fish will become sluggish due to low metabolism and ultimately hibernate. If the ice covers the entire surface, drill a small hole in the ice to maintain oxygen levels in the water.

In cases where the temperature may fall so low, please consider installing a de-icer.

Where do I set up a heater?

Knowing where to place a heater is crucial since you don’t want to destroy your aquarium decorations or hurt your goldfish.

So where do we place it? Experts recommend fishkeepers to place it at the point where water flows in and out. Doing so the water will be evenly heated hence achieving a constant temperature throughout the tank.

If you have a 40-gallon tank and above, consider placing two heaters on opposite sides. Make sure that the heater does not come into contact with any aquarium decoration.

How do I set up a heater?

After finding the right spot, proceed with the installation. Most heaters come with suction cups which help hold the heater against the walls of the aquarium.

Once in position, allow it to settle for about 20 minutes to ensure that the glass casing can withstand the temperature changes.

You can now turn on the heater and adjust the temperature accordingly. Consistently adjust after every six hours to ensure it is in the desired range. Leave it on for around 24 hours to ascertain that it can maintain the temperature within a specified range.

A heater is necessary for specific situations; when dealing with fancy goldfish and when water in an outdoor pond or aquarium seem to freeze. Otherwise, common goldfish do not require aquarium heaters to thrive.

On the other hand, ensure to install a heater in an aquarium with fancy goldfish in winter to keep temperatures constant. Also, avoid putting goldfish such as Orandas, fantail and betta fish in an outdoor pond.

Finally, look at the type of goldfish you have in your aquarium and head over to your nearest pet store and get yourself a heater.

What happens if I overheat the tank?

Overheating your tank causes the fish metabolism to increase. They fed more resulting in increased waste in the water. The oxygen levels also decrease significantly. The fish might die if the water is overheated for long.

How long should I heat an aquarium?

Heating an aquarium with fancy fish should take about 24 hours. Betta goldfish can tolerate water temperature of 72-80s F, unlike other fancy goldfish. The heating duration will also differ depending on the tank size and room temperature.