Goldfish is a peculiar type of fish whose care demands some skill and caution. Keeping goldfish might seem like a pretty easy hobby until you realize there are some perks to it. Like much other fish, you need to ensure the fish has suitable and healthy water conditions in order to survive and thrive.

Do Goldfish Need an Air Pump? A goldfish needs to have enough oxygen in the water which comes from the bubbles and movement on the water surface that is provided from an air pump. An air pump is needed by goldfish in some specific water cases to create more oxygen, but not all cases.

Getting a good air pump for your aquarium is not difficult at all. You can simply order from one at Amazon.com. There are a number of air pumps you can choose from; such as

Tetra Whisper Easy To Use Air Pump for Aquariums(Link to Amazon) – which can be used for a 10-gallon tank.

You can also try out the Uniclife Aquarium Air Pump with Accessories (Link to Amazon), Adjustable Oxygen Pump for 10-100 Gallon Fish Tank.

The Hygger Quiet Mini Air Pump for Aquarium 1.5 Watt Oxygen Fish Air Pump (Link to Amazon). All these are available and can be ordered on Amazon.

The air provided by the air pump into the tank is meant to provide more oxygen to the water. It is thus quite necessary, but interestingly does not primarily provide all the needed oxygen.

Many people often assume that without the air pump, the goldfish will instantly die. This is not true.

Although the goldfish requires very well-oxygenated water, this is not only gotten from an air pump alone. In fact, as long as there is ample movement on the surface of the water, then oxygen is provided to the fish within the tank. This can be provided even by having a filter in the tank or by different means.

Naturally, the goldfish is a quite delicate specie of fish. It requires a clean water tank, because waste matter clogs up the water and makes it still or quite sludgy, thereby increasing the carbon dioxide and shortening the supply of oxygen.

Thus you can provide a solution either by having a filter to soak up the waste matter, and stir up the water surface as well, or you can introduce an air pump that will provide some more bit of air through the bubbles, and will cause increased surface movement.

For many people, the air pump merely serves an aesthetic purpose. However, there are cases which would really require you to have an air pump for the survival and benefit of your goldfish. If there is insufficient oxygen in the tank, the goldfish might find it difficult to breathe. Thus you must ensure that your goldfish tank never lacks sufficient oxygen.

How do you know your goldfish tank needs more oxygen?

First, if the surface water of your tank appears too still, then that indicates that air is not getting within it well enough. The air from the atmosphere should cause movement on the water surface, but if it is stagnant, then your tank might require more oxygen.

Secondly, if your water tank has a high temperature, then you might need to correct that quickly. Fishes mostly prefer cooler temperature, and also cooler water contains more oxygen than warm water. Thus warmer water conditions would require you to provide more oxygen.

Also, if your water tank is very small, such as a fish bowl, it might lack sufficient oxygen. This is because there would be reduced surface water movement is a small tank than in a wider one. You can also do an ammonia test to check the ammonia level of the water.

If your goldfish tank has any of these conditions, then you should endeavor to provide more air into it to get it better oxygenated. This is where you need an air pump.

But if you have moving surface water in a cool, clean and wide enough water tank, then your goldfish should be absolutely fine without necessarily having an air pump.

But without sufficient oxygen, toxic materials would increase and can choke your goldfish. Also, goldfish require enough oxygen or they would find it difficult to breathe.

Can Goldfish Live in a bowl without an air pump?

First of all, a bowl is quite small and might not be very beneficial for your goldfish. This is because it would have little surface water movement and would lack sufficient oxygen.

Also, the goldfish would be restricted in movement, and this might not be a good sign. Thus, it is important that your goldfish has an air pump or a means of getting the water oxygenated and moving.

An id pump is even more needed when the goldfish is in a bowl because that is not exactly the ideal living condition it requires.

However, without the air pump into a bowl, a goldfish can still survive. However, this wouldn’t be ideal and it might not live a long or healthy life.

It is even advised that you do not keep your goldfish in a fishbowl at all as things could greatly reduce the expected lifespan. Asides the poor breathing conditions that this might cause, goldfish require a good amount of water and space to grow well.

Note though, that there are ways you can credit your goldfish without having an air pump. However, this would require even more effort and care.

You can do this by introducing aquatic plants into your fish bowl. Plants are known to supply oxygen or their environment so this can be a means of providing oxygen without an air pump.

You would also need to care more about the water quality by frequently changing it in the right method. Knowing that goldfish produce a lot of waste, which could reduce the water quality, it would be important to change the water often. Keeping a goldfish in a bowl equally makes it really difficult to filter, and so isn’t really the best option.

However, a goldfish generally can live in a bowl without an air pump for a while depending on the other measures employed to provide oxygen and quality living conditions. But it is not quite the best conditions for a goldfish.

Why is my goldfish gulping air at the surface?

Many beginner aquarists often notice with some concern that their goldfish comes together they surface for air. Obviously, this is an indication that the goldfish isn’t getting enough air and is really struggling to breathe beneath the water. 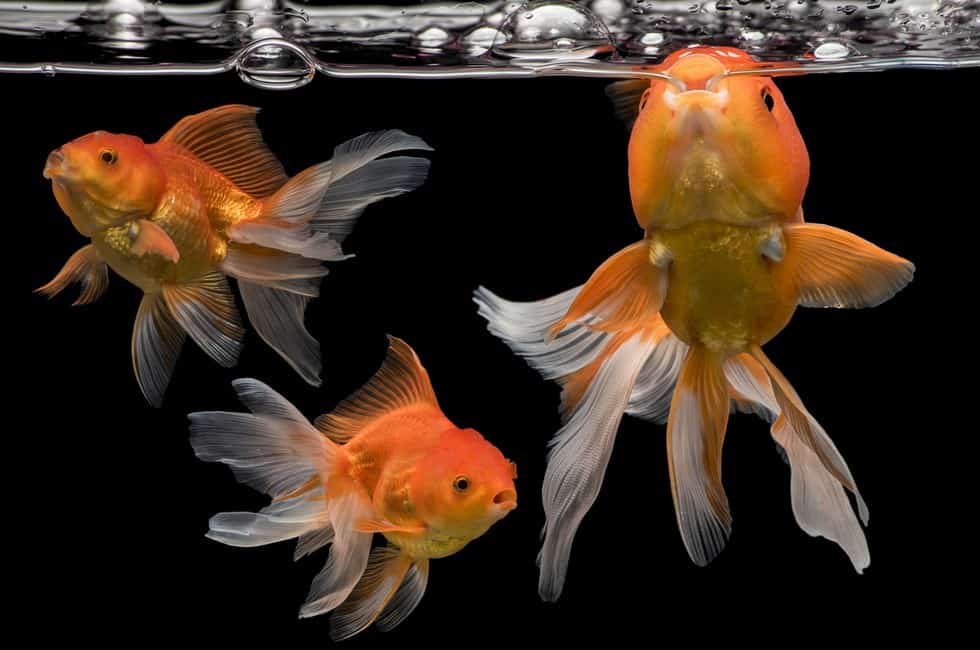 This shows that you urgently need an air pump or risk your goldfish dying young. It also shows that the water lacks air and the fish is stressed. If this continues, it can very well lead to the goldfish getting sick and dying.

You might also notice your goldfish struggling to breathe by a somewhat frantic movement of the gills when it comes to the surface to get air. This could be a tedious activity and it might eventually make the goldfish reduce its activity due to fatigue.

How to Add oxygen to the Fishbowl

If your fishbowl doesn’t get enough oxygen, this might be risky for your goldfish. This might be because it is a small bowl and there isn’t enough surface movement. You get It is therefore important for you to add oxygen to the bowl through some external means.

As earlier stated, you can introduce aquatic plants into your bowl. This has a way of naturally providing the oxygen from plants into the water. You must, however, make sure the plants you introduce are healthy and large enough to not be eaten by the goldfish.

You can also get your bowl oxygenated by frequently changing the water. When the water gets warm it lacks sufficient oxygen and requires you to change it to cooler water. Also, the water needs to be changed in order to avoid it getting contaminated.

When the water gets filled with waste matter, the temperature increases and it gets deprived of oxygen and the goldfish begins to struggle to breathe. Thus changing the water often helps to provide more oxygen for the goldfish.

In addition, an air filter is really necessary for your fish bowl or fish tank. This would help filter out debris and toxic matter from the tank, which is a task that cannot be ignored.

Knowing that the goldfish produces a lot of waste, there is a need for a good air filter, which equally serves to disrupt the water surface and create let the surface air dissolve into more oxygen.

In fact, once an air filter is used, there might be little or no need for an air pump at all. The air filter is quite indispensable to the survival of the goldfish. All that matters is that oxygen is made available and the water quality is well maintained.

How long can goldfish live without an air pump?

As it has been stated, goldfish do not always require an air pump to survive. It can do well in a tank that is well oxygenated for as long as it normally can.

As long as there is enough surface movement that translates to oxygen, then the goldfish can live just fine without an air pump.

Also, as long as the quality of the water, the feeding conditions and the general welfare of the goldfish is well maintained, then the goldfish can live for many years.

However, on the other hand, if the water tank lacks sufficient oxygen, a goldfish might not enjoy the best living conditions at all. It might struggle for a while due to the waste build-up, and if not attended to might die.

The goldfish living in these poor conditions would only survive a few days, and only if the tank is a bit wide to preserve some oxygen. It would be even worse without a filter to filter toxic material from the tank.

So, depending on the size of the tank, the living conditions, the number of fish in a water tank, the health of the fish, lacking an air pump can have an adverse effect on your goldfish and shorten its lifespan.

The size of a goldfish

If your goldfish lives in a good, well-oxygenated and well-fed condition, it can grow a bit more. Goldfish are usually known to be quite small and many people keep their goldfish in a fishbowl because they somehow think it would always remain small.

However, this only serves to stunt the growth of your goldfish and limit the size.  Goldfish can actually grow a bit more than many think.

More tips to note in your goldfish care

Finally, you should avoid keeping too many fishes in your goldfish tank. Goldfish require space and good water conditions. Knowing that goldfish pollute water very quickly, having too many would cause the water to be contaminated too quickly. Not recycling the tank is also a mistake that would harm your goldfish.

It is also interesting to note that you mustn’t overfeed your goldfish. Goldfish might be quite greedy, in that they would keep eating as long as there is food, even when this is bad for their health.

The food they eat gets digested very quickly because they don’t have stomachs. They should, therefore, be given food in small quantities to keep them in good shape.

Using the appropriate filter is equally necessary for your goldfish to thrive. Taking care of your goldfish can be an interesting task or hubby if you take the responsibility it requires in getting the tank well-oxygenated with an air pump or other valid means.