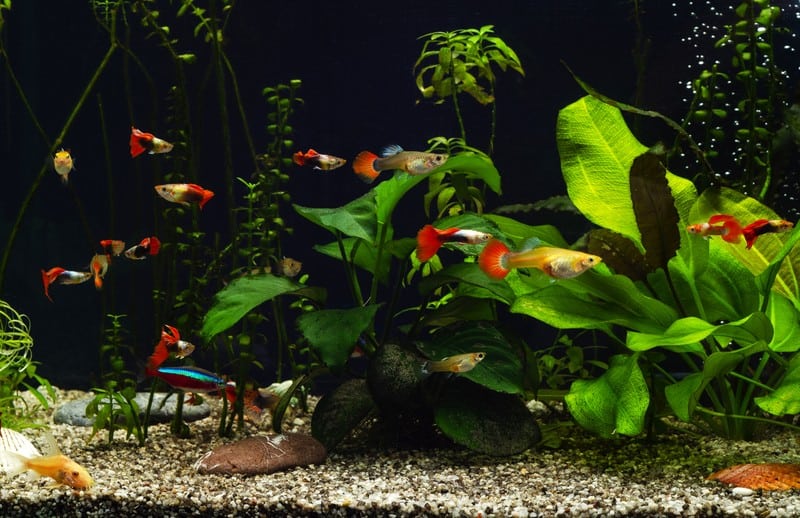 In this article, we’ll go through a few key elements of algae in home aquariums and whether guppies and mollies help with the problem!

Do guppies & mollies eat algae? Well, there’s no hard and fast rule with algae control, it usually involves a lot of finesse and patience. The best answer I can give you is yes, but to a certain extent.

Guppies and Mollies As a Main Algae Control Source, is it Possible?

Guppies and mollies have very similar makeup and disposition with probably the only difference between them are their size and shape, mollies being bigger.

In the wild, they feed on a variety of things which include worms, algae, and insect larvae just to name a few.

In the aquarium, they eat pretty much anything you throw at them. They are a joy to feed as they are also very voracious eaters. Having said that, however, there have been mixed reactions as to whether you can actually raise guppies purely on algae alone.

A good number of aquarists have found that guppies in an outdoor pond do very well just feeding on algae alone whilst some argue that while they do graze on algae, a large part of that grazing involves looking for other food sources such as insect larvae or worms.

Also, it depends on how much algae there is. In a pond setting with sunlight penetrating the water almost 12 hours a day, algae grow much faster than any guppy or molly will consume.

In a fish tank, where photoperiods are 10 hours or less, the amount of algae is significantly lesser, and as such, will probably require some form of dried food to supplement their diet as algae would probably not grow as fast.

Type of algae available also plays a big part as to whether guppies and mollies will feed on them.

For example, guppies and mollie will probably eat the softer varieties of algae forgoing the tougher species such as hair algae. However, algae is an important food-source for guppy and molly fries as it serves as an important protein source for them.

Will They Eat My Other Plants As Well?

Yes. in the wild, they generally tend to eat anything organic that can fit into their mouths, which includes nipping off bits of plant matter.

While guppies and mollies make good additions to a community tank, it is important to note that their behavior is such that they are constantly nipping at everything, yes I mean everything, from the other fishes to plants to the substrate

Why do algal blooms occur?

Do you know the green cloud of death every aquarist detests so much? Yeah, that one.

So why do algae blooms occur in our aquarium and is it beneficial for the fish and other animals in the aquarium? Well, the short answer is no, due to a couple of reasons.

While there are several ways excess nutrients come about, the most common reason is due to overfeeding. Overfeeding causes a build-up in excess uneaten food which then results in a build-up of ammonia, nitrites, nitrates, and phosphates which basically is all the bad stuff which algae love and need to grow!

Photoperiod – We know that algae are a type of plant

Plants need light to photosynthesize to produce nutrients to grow. Lowering the photoperiod for example from 10 hours a day to 6 hours a day could see you a significant difference in the number of algae present in your tank.

New tank syndrome happens when the general parameters in the aquarium have yet to stabilize resulting in the new bacteria unable to handle the new bioload. And then like in reason 1, the excess nutrients cause an algal bloom.

However, there are some benefits to having algae bloom in your tank. For example, new keepers rarely decide to get test kits to ensure water quality. As a result, algae blooms serve as a very good marker or signal to the aquarist that says, “hey somethings wrong here, better do something”.

And yes, while algae blooms are possibly the absolute bane of an aquarist (probably second only to having all your livestock dying off), they also serve the purpose of consuming excess nutrients, which is a great thing.

Algae is also an important part of the ecosystem, many organisms rely on algae as a food source in the ocean. Of course, in the aquarium setting, we would rather not have the wave of green take over our tanks.

How Can We Control Algae?

Okay, so now that we’ve gone through how algae/algal blooms occur in the aquarium, let us talk about the good stuff, how can we minimize the number of algae in our tank? Or is it at all possible?

Well before we start, I’d personally like to let you know that algae in the tiniest amounts are in ALL tanks, and I mean ALL. No aquarist has a tank that is completely free of algae, however, good aquarists are able to quash the number of algae in the tank to a minimum.

Let’s take a look at a few ways!

Yes, it is amazing watching your fish eat, and sometimes, especially when we’re new, it’s hard to stop. But the bottom line here is that reducing excess nutrients is key in controlling the number of algae in the tank.

Yes, medication works wonders and its addictive to see how a few drops of medication can clear up a tank in a matter of hours. However, medication is always the last resort when all else has failed.

Like what we spoke about earlier, algal blooms signal deeper problems and is only a symptom. The medication kills the algae but does not solve the root problem which is the excess nutrients in your tank.

Copper-based medication is especially harmful to organisms such as snails and a small amount could kill all the snails in your tank! So once the medication has run out in the aquarium, guess what, you can expect another algal bloom to happen.

Some fish do eat algae

For example, guppies and mollies enjoy grazing on softer algae in the tank, essentially helping you manage any algae problems you might have.

Most livebearers would be suitable as well, that being said however, algae is not a part of their main diet and should only be a supplement to what they consume daily.

4. Snails form an important part in any home aquarium cleanup crew, whether algae or leftover food, snails do the job well.

Controlling algae in a fish tank is not an easy task especially for a beginner. It is a problem even professional and experienced fishkeepers struggle with.

So let’s do a recap!

1. Excess of nutrients – Usually the main reason for this is overfeeding. 2. Exposure to too much light – Long photoperiods can sometimes cause algal blooms. 3. New tank syndrome – Before a tank is mature, sometimes algal blooms occur, however soon

goes away once the tank starts to have more balanced parameters.

How can we reduce algal blooms in the tank?

1. Control your feeding – Feed enough such that they finish in about 5 minutes is a rule of thumb. Personally I feed a pinch each time every day, removing any or all uneaten food.

2. Medication – Only use this as a last resort as it could severely impact life in your tank if you do not know what you are doing.

3. Livestock that eats algae – Some fish like guppies and mollies eat algae, also snails are a good option for algal control.

All in all, remember algae control is a process and does not happen overnight, it is absolutely important that you remain patient at all stages as it takes TIME.

I hope this article was helpful as it was fun for me. Thanks for reading!