Do you wish to have a lovely aquarium but find yourself continually fighting algae?

Every aquarium owner knows how tough it is to keep aquarium algae under control. Algae will multiply no matter how carefully you maintain your aquarium unless you take extra efforts to control their growth.

Green algae, being the most common type of algae, are usually considered good algae. They aid in the removal of excess nitrogen from fish tanks. Green algae are grown by some aquarists as a source of nutrition for their fish.

However, this will only work if there are other plants in the aquarium; otherwise, the tank will simply be a weed. Also, keep the green algae to a minimum by cleaning it often.

Being a common struggle in every household, let’s get to know more about algae and how to keep them in control.

Is It Okay to Have Algae in Your Fish Tank?

Not only that but also gives the aquarium a more appealing appearance by making it look like a natural setting rather than a little artificial pond. But of course, too much algae will spoil the look.

As a result, having algae in your fish tank is not a problem, but it should not cover the entire tank. Algae is beneficial to the aquarium if kept under control.

What Does Green Algae Mean in a Fish Tank?

Hair, thread, or spot algae are other names for a green algae. It is a beneficial species of algae that will most likely appear in every tank at some point. Usually found at everyone’s aquarium, it gives a natural sea look to your fish tank.

They will not overgrow as long you take good care of them. It is actually a good algae, with certainly a lot of benefits.

Apart from this, green algae are the only algae that are eaten by fish. Hence, using them in the aquarium will keep everything under control.

Green algae in a fish tank indicate good water quality and environment. They are grown by some people as a source of nutrition for their fish.

Green algae are considered “healthy” algae, but their growth should be monitored to ensure that they do not deplete the nutrients available to the fish.

While some algae species are poisonous, the most prevalent cause of fish death is a lack of oxygen in the water layer.

Algae, like other plants, use sunlight to photosynthesize and produce oxygen in the process. You might be perplexed as to how anything that creates oxygen can also deplete it.

Algae transform light from a light source (such as the sun) into energy that they can use to grow and reproduce. As a by-product of this chemical process, oxygen is created and released into the atmosphere (the water body). The same algae absorb the oxygen that has been released into the environment during the hours when there is little or no sunshine.

Green algae may harm fish if they are deprived of their nutrients and do not get sufficient oxygen at night.

Should I Let Algae Grow in My Tank?

Algae is the most common problem that everybody with a fish tank, whether an expert or a beginner, faces.

Algae can be found in the corner points of your tank as a green, brown, red, or blue-ish residue. This growth may appear on tank accessories, pebbles, gravel, and other surfaces.

Don’t be alarmed if you find a little green or brown trace surrounding your aquarium tank. Algae growth is common and even beneficial to your fish and plants. It only becomes an issue if it grows out of control, as it might be harmful to your fish.

The type of algae that grows in your fish tank should be taken into account when deciding whether or not to let it grow. Some common types of algae in aquariums are:

The presence of too many nitrates and phosphates in the aquatic system is usually the cause of blue-green algae. It’s also possible that it’s cyanobacteria, a type of bacterial organism. This form of bacteria must be removed from your tank immediately since it can harm your fish and plants.

To get rid of algae, be sure to remove excess nutrients from the water and utilize treatments like Erythromycin.

Green algae is an indication that your tank is in good condition, and you may observe it quite often. Still, you need to ensure that it doesn’t grow uncontrollably.

By maintaining proper nutrition levels and providing exposure in your aquarium this sort of algae can be prevented from growing out of control.

Cleaning red algae is a challenging task. It is difficult to remove and will necessitate bleaching the tank. This type of algae is frequently seen on aquatic plants rather than on the edges of tanks.

It is an effortless process as it can just be scrubbed off using a finger or a cloth. As long as the tanks are healthy, brown algae will fade away on its own.

How to Fix Green Algae in a Fish Tank?

Algae can be unattractive and unpleasant, and while it is usually not harmful, it is something we want to get rid of.

Algae may be a real pain to deal with in the aquarium. They will most likely poison the tank and kill all of your fish in the worst-case scenario.

Also, the single most prevalent reason why many aquarists abandon their aquatic plant collections is that many people mistakenly attribute algae growth to excessive lighting.

But eventually, algae will grow if the lights are turned on too low, too bright, or for too long. Sunlight will also cause algae to grow.

Although you cannot prevent algae from entering your fish tank, they can be controlled. Algae float easily in water and are borne in the air. They can be blown into the tank, or they can be added with fish, plants, or rocks. 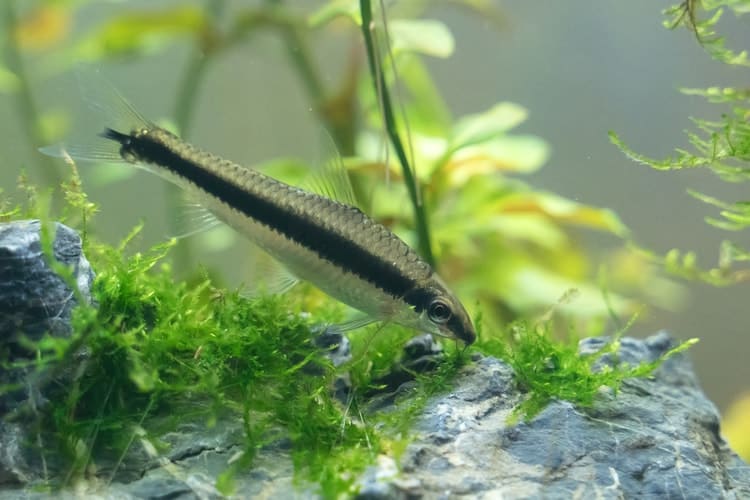 Adding a fish that eats algae is the best and easiest approach to eliminate green algae. This will not only keep your fish tank clean, but it will also make it more attractive with the addition of a new type of fish.

There are many kinds of such fish namely, Siamese Algae Eater, some of the sucker-mouth catfish – Hypostomus, Kissing Gouramis, Otocinclus, and Farlowella species. They will not keep the whole tank clean but will help you in maintaining a healthy tank.

It is impossible to totally eliminate green algae. However, using one of the rough canes that support house plants, is one of the best ways to keep them in control.

To wrap the filaments around the cane, poke this into the middle of the algal mass and spin it between your fingers. The algae will be removed when you pull the cane out. Repeat as many times as needed. This will not solve the problem, but it will help you keep it under control.

Other options for removing green algae from your fish tank include physical removal, avoiding direct sunlight, limiting the amount of light in your tank, a two-day blackout, and hiring tank cleaning services.

What Are The Best Algae-Eating Fish For Fish Tanks?

There are several different types of fish that can maintain your fish tank clean of algae. Many aquatic species eat algae as their primary source of nutrition.

The algae eaters live at the bottom of the aquarium and eat whatever algae they come across. Most algae-eating fish are omnivores, and algae provide the majority of their nutrition.

Because the majority of algae in your aquarium grows on plants, an effective tank cleaner should be able to eat the algae without harming the plants.

The best algae-eating creatures are: