The number one requirement for a fish is obviously water. Every fish needs water to stay alive. This is because, just like all living organisms, they require oxygen to stay alive, and they are designed to get this from water.

How Long Can a Fish Stay out of Water? Despite how much fish depend on water, some fish are known to be able to stay out of it for some length of time. Depending on the type of fish, some can survive for just a few seconds, while others can stay out of water for several days, and even months.

The only reason why they do not stay on land soaking up oxygen from the air like you and me is that, instead of lungs, they possess gills which help them to convert and absorb the dissolved oxygen present in water.

However, there is a wide variety of fish species, with varying anatomies and special features that allow some of them to get oxygen from the air as well as the water, and also swim.

Every seasoned fish keeper or aquarist knows that some fish are in fact mammals, and they do have lungs or other physical features that help them to get all the oxygen they require to stay alive and even store them for some time as they swim underwater.

The fact is that different species of fish can survive in several different water conditions. Some fish actually cannot survive without frequently coming to the surface to take in air, such as the whale.

Species of mammal fishes such as this include the bottlenose dolphin, blue whale, minke whale and beluga whale. Contrary to popular opinion, some fish even live in small puddles or muddy swamps and are not required to stay in flowing water.

It might seem astounding, but there are actually a lot of fish that can stay out of water for an amazingly long time.

Can a fish survive out of water?

Although most fish do not have the right anatomy to extract oxygen directly from the air, many are still able to survive for a period of time. While you may wonder if your aquarium fish can live without water, the best environment for them to survive naturally is in water.

When taken out of the natural habitat from which they are designed to extract oxygen, fish start to suffocate and will soon die. Ultimately, a fish cannot survive forever out of water. It is only a matter of time before it begins to suffocate.

If you have an aquarium or a fish tank, you shouldn’t make the mistake of intentionally emptying all the water from the tank based on the assumption that fish can survive without water.

While your pet fish might survive out of water for about 10 minutes, it is not ideal and is a cruel thing to subject your fish to.

Those few minutes your fish spends outside of the water would cause it significant stress as a result of the gills flapping and trying to extract oxygen from the wrong environment.

What happens to fish out of water?

Taking the average fish out of water will make it very uncomfortable. It has no access to oxygen and soon begins to suffocate and gasp for air. It is not unusual to see a fish flap its fins and attempt to find water by any method possible. The gills then arch and the fish collapses from the effort of trying to ‘breathe’.

A fish that becomes this frantic immediately when it is out of the water shows that it has no supplementary organ or lungs to help it survive for long out of water.

However, this doesn’t happen to all types of fish, as many of them are suited to breathing out of water for an impressive and almost unbelievable amount of time. Some of these types of fishes are listed below.

What fish can breathe out of water?

One such fish is the Mudskipper. This is a very interesting and amazing thing to note: Mudskippers are known to be able to live for most of their lives on land, even though they are a species of fish. This is because the skin of the Mudskipper is peculiarly designed to absorb oxygen easily into its bloodstream. It has its blood vessels close to the skin surface and does very well in a muddy or swampy location for long periods of time.

Similar to this fish is the Rockskipper fish (or Coral Blenny). This is a freshwater fish that can skip around from place to place, find new water habitats, and even find mates for themselves while on land. As long as it is moist and can find food, the Rockskipper is known to be able to stay on land for several hours at a time.

You find them most frequently after they have been washed up from the water by heavy rain or tide. They propel themselves forward with their pectoral fins and breathe in the air using an organ that is separate from their gills, and they can survive for a good amount of time before they need to get back into the water.

Catfish generally have an excellent ability to adapt to different water conditions. A number of catfish, probably being kept alive for sale, can be put in a large bowl or tank with just a little water to keep them wet. They can stay alive in this condition for several hours (up to 15-18 hours).

The Snakehead fish is also known to be able to last for a very long time, up to six days, out of the water and sometimes even for months! It is a freshwater fish and can travel on land to find a new habitat when it isn’t thriving in its previous habitat.

Thus, if you have this kind of fish in your aquarium, you should be cautious about taking it out of water for too long. You don’t want it to start to scuttle away, as it can be quite harmful to an unsuspecting victim.

The Lungfish also, as its name implies, breathes with its lungs and can survive for a very long time out of water.

Eels are also very commonly seen on land, slithering both on sandy or rocky surfaces, even though they are classified as fish. A lot of fish are very resilient and hardy, and some, like the Climbing Perch have a combination of gills and lungs and have the bizarre and incredible ability to breathe outside water.

The Mangrove Rivulus is also known to be adapted to live both in and out of the water, as their skins can function just like gills in required situations.

The Killfish is also famous for its ability to shuffle on land for a good length of time. They do this purposefully in order to get themselves back into water.

Other fish species, such as whales and dolphins which are mammals, get all their required air directly from the atmosphere, and not from water. They do not have gills but possess a sort of airbag inside their bodies.

Therefore you see them dive out of the water in a seemingly happy display. Essentially, this is to breathe in air and store it in their airbags for use when they are spending any length of time under the water, before they are required to get back to the surface to breathe again. 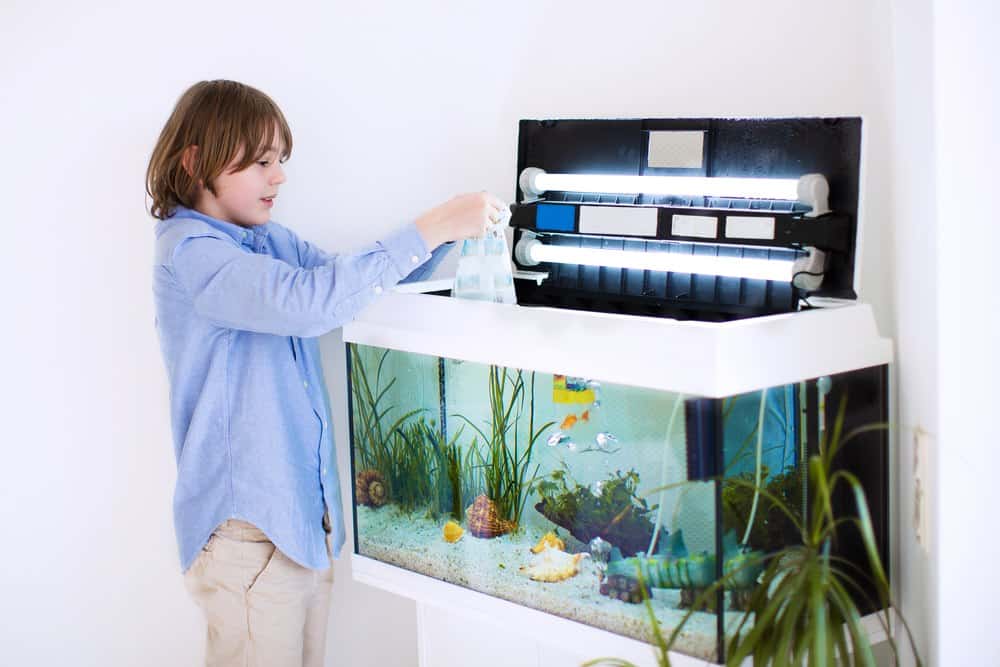 Why does a fish die when removed from water?

Fish die when out of the water as a result of suffocation. Just the way you can’t stay alive when you have no access to air. Fish get their oxygen when their gills dissolve it from the water and then absorb it into their bloodstream.

If a fish depends only on its gills for breathing, then it would not be able to get oxygen from the air the way humans do with their lungs.

It is the same as how a human, who breathes with his lungs, would soon suffocate and drown underwater. Many fish do not last more than a few seconds or minutes at best before they begin to die.

However, some fish might not die immediately when they are removed from the water. This can be as a result of it still being wet or in watery surroundings even when it is not in water.

As long as there’s still some water on the gills of the fish, it can make use of the dissolved oxygen to breathe for some time. Fish such as Catfish can stay alive in this way for up to 15 hours when removed from the water.

It is a fact that fish in the wild will sometimes move out of a water habitat when it’s no longer suitable or healthy for them. Sometimes, the oxygen level in the water is so low that the fish which require high levels of oxygen will find it difficult to survive.

They thus have the capacity to leave such water conditions and look for a better habitat. Some fish leave their water habitats due to threat from predators.

Also, since fish are not terribly bright creatures, they might mistakenly swim or get washed onto land, or even jump out by themselves. Some are suited to survive under such circumstances while some are not.

The important thing to know is that the average fish will soon start to show signs of exhaustion after one hour of having no water flowing through their gills. They will then flap helplessly and frantically.

How long can you keep fish out of water?

Keeping a fish out of water just for the sake of it might not be the nicest way to treat your pet or aquarium fish. This is because it is torture to stay without access to oxygen for an extended period. However, if for some reason you have to do so, or if it happens by mistake, then it’s useful to know how long your fish can survive out of water.

It is very possible for your pet goldfish to mistakenly jump out of its bowl and stay on the floor for some length of time alive, but gasping.

So in order to determine how long you can keep your fish out of the water, you must bear in mind what species of fish you have, as well as your reasons for keeping it.

In addition, fish go through a process known as estivation if they are to stay without water for a long period of time. This is done whereby they wrap themselves in a natural sort of cocoon and dig themselves into the mud and stay in a dormant state for a pretty long time, sometimes up to a year.

This is usually done during the dry season when the water dries up in the wild, and they can’t get the required oxygen. A fish being kept out of water gets tired and would thus need to adapt through some other means, hence the process of estivation.

Finally, we can see that the rules regarding fish needing to be in the water at all times have a lot of exceptions.

Some fish are clearly amphibious, while some are fully air-breathing. However, note that your aquarium fish always needs water to survive, and a very good amount of it if they are going to thrive.

However, you should be aware that different species of fish are adapted to various conditions, and some might actually require oxygen beyond what is available in the water.