Goldfish are among the hardiest fish out there which is why they have always remained a popular choice for hobbyists.  When kept in the right conditions, goldfish can live for decades.

They are among the most remarkable fish species out there due to their intelligence which allows them to remember given things for months and even learn tricks.

In most cases, newbies get a goldfish and put it in a bowl or small aquarium because of the common misconception caused by movies and mass media which is the complete opposite of the truth.

With this said, how many goldfish can you keep in a 10-gallon tank? A tank of this size is insufficient for a goldfish if you want it to live a long and healthy life.

Most species outgrow a 10-gallon tank in a matter of years. However, as long as you plan to move your goldfish to a larger tank in the future, you can keep it in a 10-gallon tank as a start.

To learn everything about Goldfish and the suitable tank sizes for this species, continue reading below.

You can also check out some of the Best Fish for a 10 Gallon Tank!

Why is a 10-Gallon Tank Too Small?

To startup, we all have seen countless cases of goldfish in a bowl or a small aquarium. This is the most common misconception in the world of fishkeeping.

It could be because it is such a common occurrence to see goldfish in movies or because people think that just because someone’s goldfish survived for several years in a bowl.

At the same time, the natural lifespan of goldfish is around 25-30 years. When you look at it now, do 3-5 years in a bowl sound like a happy and healthy life? No, the truth is that such goldfish are unhappy, unhealthy, and do not grow even halfway to their true size.

As for the question about a 10-gallon tank, it is only suitable for one or two baby goldfish.

As soon as they start outgrowing the tank, you will need to consider at least 20 gallons of space for every other fish.  Some goldfish species grow up to 12 inches and possibly more which easily answers your question about space.

How Do Goldfish Grow?

If you keep your goldfish in the right conditions, there is no way that it will not outgrow a 10-gallon tank. As we already mentioned, this species is one of the most remarkable fish out there if not in the whole animal kingdom.

The growth of a goldfish depends on the water condition in the tank next to the Growth Inhibiting Hormone that they produce. When this hormone builds up in the water, it significantly reduces the growth of goldfish.

This is why regular water changes are key to the healthy survival of your goldfish. This hormone gets diluted during water changes which cause the fish to continue growing.

This is also why people see small goldfish in a bowl or a small tank and believe that this is their true size. On the contrary, it means that the water is polluted and their growth has been interrupted.

This is another reason why goldfish need a lot of space. This hormone requires more time to accumulate in larger aquariums which allows the fish to grow as they normally would.

Also Read: Do Goldfish Eat Each Other or Other Fish?

You should already know that a 10-gallon tank should be nothing more than a starting point that needs to be expanded. You need to buy a significantly larger tank as soon as your goldfish grows to 2.5-3.0 inches in length.

Here is what you need to do to set up the perfect environment for a goldfish:

When you choose a substrate, consider getting a darker color that will enhance the coloration of your goldfish. If you choose a lighter color, it could lead to a loss of color since goldfish match their colors with the environment around them.

Most beginners stay away from living plants but if you want to have a genuine green decoration in the tank, choose smooth and small gravel that will be easy to work with.

While some people claim that goldfish do not particularly require a filter, we strongly recommend getting one. It will decrease your maintenance responsibilities and it will keep your fish safe for a prolonged period between water changes.

It is important to get good filter media for your aquarium that will give beneficial bacteria a home. We recommend getting the slightly more expensive options that remove ammonia, nitrate, and nitrite from the water which are, in most cases, unhealthy and even deadly to most fish species.

Getting a couple of plastic plants is absolutely insufficient. It is close to the mind that any fish would prefer to live plants and goldfish are no different. Besides that, plastic plants could easily hurt the fish, especially those species that have reduced eyesight which is common with goldfish.

In fact, it is considered that goldfish live longer when their aquarium environment is densely planted.

In addition, you can also add aquarium-safe decorations like woods and rocks as long as they are not part of the group that affects the water and life in the tank.

Light is extremely important for the life of any living organism. Therefore, it is also just as vital for goldfish as it is to any other fish species. The fact that people leave them in bowls or small containers without any artificial light is saddening and we strongly recommend getting full-spectrum lighting for your tank.

You should never introduce fish to a tank directly after filling it with water. The chlorine and other contains could cause a terrible impact on your fish. The same exact rules go for goldfish also.

In order to prepare the water for your goldfish, you need a quality water conditioner and at least a week of time to completely cycle the tank.

Do Goldfish get lonely?

Another common misconception about goldfish is that they should be kept alone. The truth, however, is quite the opposite. Goldfish are significantly social fish and they feel best when in a company.

In fact, it is considered that it could increase the lifespan besides the obvious beneficial impact that it has on stress levels and happiness.

The ideal number of goldfish is 3+ but it would require a lot of extra space and attention. If you plan to own three or more goldfish, consider getting at least a 40-50 gallon tank as a start.

While you can put a goldfish in a community tank with other species, we strongly recommend against it. It is possible that it will get along with larger fish but at the same time, it is in their nature to eat any smaller fish that fits into their mouth. The ultimate choice is to have several goldfish of the same kind.

Can two Goldfish live in a 10-gallon tank?

Two fully grown goldfish would hardly be able to move in a 10-gallon tank. You can keep two only when they are as small as babies. Once they go beyond 2.5 inches each, you need to transfer them to a larger aquarium if you want them to grow healthy and happy.

What fish can live with a goldfish in a 10-gallon tank?

As already mentioned, the most suitable tank mate for a goldfish is another goldfish of the same species or more. Smaller fish species that are most common nowadays could easily become the prey and, in most cases, will.

Nevertheless, there are several species that are known to fit into a community tank with a goldfish. They have similar water requirements and swim faster than goldfish which is why they would unlikely become a meal. 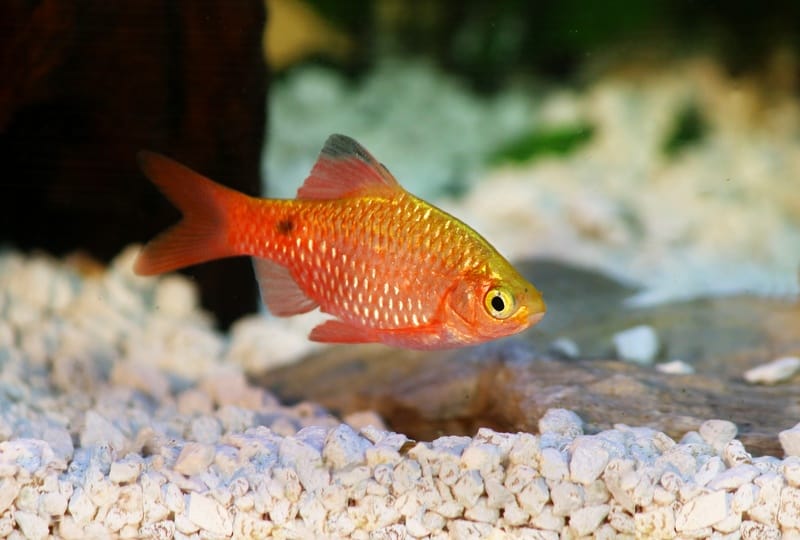 These barbs are similar in appearance to goldfish and also have identical water requirements which make them a perfect match. In addition, they also grow quite large – 4-6 inches, which means that they are too big to become a meal for goldfish.

However, Rosy barbs are schooling fish which means that they need to be kept in schools of at least 6 which can be a problem with their size. What we mean is that you will need a significant tank to keep these two species together. 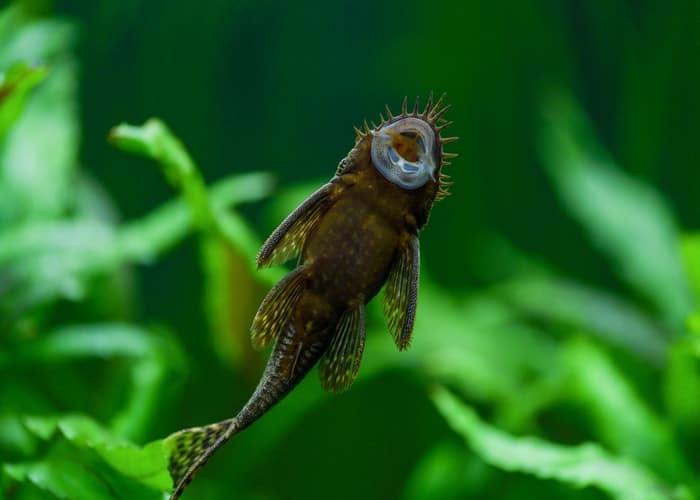 Not all species of Plecos are suitable tank mates for goldfish. These two, however, have calm tempers and would not interact with the goldfish in any way. Instead, they will mind their business and eat the tank waste that builds up in order to keep the water clean. 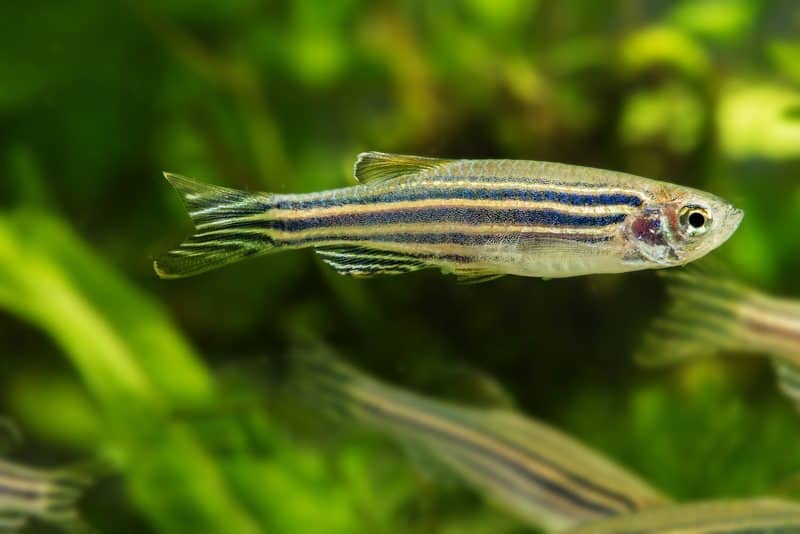 Another schooling species that needs to be kept in groups of at least 6 but this time, not as large as Rosy Barbs. You can keep those with goldfish in smaller tanks since they do not grow too large. Zebra Danios are a good match due to their speed and identical water requirements.