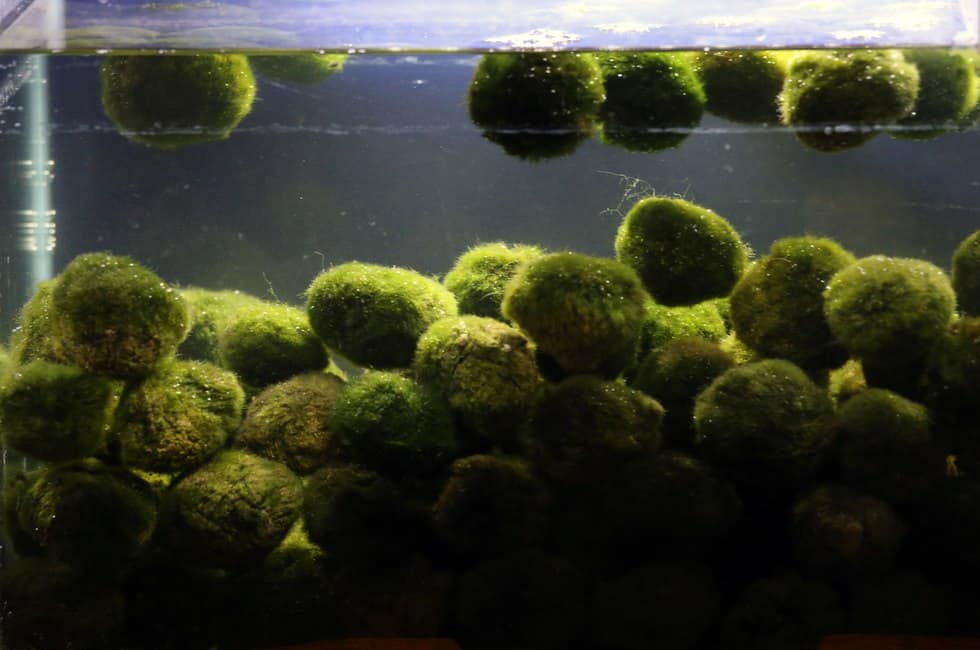 Have you come across an aquarium with green moss balls? We bet you have, they are gradually gaining popularity among hobbyists. But how many should you keep per gallon? Let’s find out.

You can check out Giant Marimo Moss Balls on Amazon.

So, you want to know more about moss balls? Their care, types and more facts? Read on! In the subsequent sections, we’ll cover these and much more.

When adding moss balls to your aquarium, you have to make sure that they cover at least a 1/4 of your tank’s substrate. As such, getting 2.5” balls is recommended for all tank sizes. Keep in mind that moss balls take at least 8-15 years to mature.

Therefore, if you prefer smaller/younger balls, the number will increase per gallon.

What Exactly is a Moss Ball?

A moss ball is a rare growth of algae that grows into large green balls with a soft appearance. They are also referred to as moss ball pets, Mossimo or Cladophora ball.

Moss ball definitely beautify your aquarium giving it that natural look. At the same time, they keep your tank health and free from toxins. Most common are Marimo moss balls

Marimo moss balls were first discovered in Japan in Lake Akan in the 1900s. Although they were found here, you can still find them in countries such as Australia, Scotland, Iceland and others.

They are valuable to the Japanese people. In fact, they are treated as a national treasure, with the Ainu people holding festivals in a bid to preserve the endangered plant.

How do they form?

The algae wives around itself from the center outwards. They are formed as the ball rolls along the lakes bed facilitated by water waves.

Moss balls have a relatively slow growth rate since it can grow just a few millimeters per year depending on climatic conditions. In an aquarium however they can grow much faster.

They are part of an algae family – Cladophoraceae. They form naturally as algae wives around itself. They are easy to propagate and maintain.

These are manufactured moss balls which are glued to a core made of Styrofoam. Most come with a ribbed plastic core to encourage rapid growth. In fact, many hobbyists make their own java moss balls. However, maintaining their desired shape and size can be a daunting task.

As the name suggests, they are fake! They are no more than just mere decorations. Why do hobbyists prefer them? Could be because of their cheapness and little to zero maintenance effort. Entirely made of plastic, they offer safe hiding spots for fry.

How do you take care of moss balls?

Taking care of these balls is a piece of cake. In fact, if well taken care of they can live for more than 100 years. Yes! 100+ years. So, how do you maintain these beautiful and wonderful family heirlooms? Let’s find out.

They require low to medium indirect light. Put them in a direct sunlight spot and they’ll turn brown. Remember that they originate from cool waters, therefore, aim to achieve similar conditions in your aquarium.

For optimal growth, change the water at least once in two weeks. In summer, the frequency might increase due to increasing water temperature. Agitate the moss ball so that it rolls to the other side in a bid to retain the round shape.

Just like any other plant, moss balls require fertilizer to feed. You should add liquid fertilizer if your fish are not producing enough ammonia and nitrates. Also, ensure there is enough carbon dioxide in the aquarium. You can add a CO2 system to supplement the levels.

Why are my moss balls changing color?

Well, this can be triggered by different factors. If they change from green to brown, it’s a sign that they are sick. Please wash them with running tap water and add some salt into the moss ball.

Alternatively, this can be a sign of excess direct sunlight. Move the tank to a low-light spot where they will recover gradually.

Gray color indicates that your moss balls are not getting enough light. As such, you should roll them once in a while to make sure both sides get ample light.

Why are my moss balls floating?

Naturally, they sink in water. However, you might find them floating. Relax! It is a regular sight for moss balls. You see, during photosynthesis, they release oxygen bubbles, these bubbles make them float. Additionally, when you first add them to your aquarium, they will float for about 2-3 days.

What do moss balls eat?

They primarily feed on ammonia and nitrates found in the water. As such, they compete with algae and as a result, they deprive them of their primary food which leads to few algae in the tank.

Why do I need Marimo moss balls in my tank?

Moss balls are extremely beneficial to your tank. How? Let’s find out.

Plants use CO2 and release oxygen. Such is the case for moss balls. They release oxygen in the aquarium and act as an ideal alternative to noisy air stones.

They feed on nitrates that are extremely harmful to your fish. They also act as filters since they suck up phosphates, ammonia, and other debris.

Moss balls do not produce new leaves or other parts. As such, you’ll not have to remove plant decaying matter. As long as water conditions are optimal, it will remain green and intact.

Algae is a nuisance to most hobbyists. They cover substrate, decorations and spread all over the glass. What better way to control them than adding some Marimo moss balls. You see, moss balls are algae, therefore, will deplete nutrients required by other algae.

They can tolerate low or high pH levels in the water, unlike most plants.

Those are some of the chief benefits of adding Marimo moss balls in your aquarium.

Yes, but make sure the water is dechlorinated and purified. To achieve this, leave the tap water resting in a bucket for 24 hours.

How do I clean moss balls?

Are moss balls good for bettas?

Yes, bettas love moss balls. One minute it is a resting place and the other it is a ball. They live in perfect harmony! Moreover, since moss balls are hardy, they can thrive in betta water conditions.

Are moss balls good for goldfish?

No, goldfish are notorious and will gradually tear the balls into shreds

How long can moss balls survive without water?

Naturally, there can live for up to a month without water. However, this is not recommended.

How can I tell my moss balls are dying?

Dying moss balls will change from green to brown. What causes this? It can be as a result of too much light or accumulation of other forms of algae on their surface.

Fortunately, you can save your moss balls by moving them to a medium to low light spot. Alternatively, you can use scissors to trip the ball in a bid to remove the outer layer.

How do I propagate more moss balls?

Using a pair of scissors, cut the moss balls in half until you get the desired number. Take each piece and roll it into a sphere using the palms of your hands. To hold them into shape, tie some a sewing string around them. The string will breakdown as the moss balls intertwine.

Over to you: Do you need Marimo moss balls?

As we have seen, moss balls are beneficial to your aquarium in many ways. For example, they oxygenate the water, suck up pollutants, control the growth of algae, etc.

Therefore, we’d recommend keeping a few based on the size of your tank. Avoid buying fake/artificial balls because they are just decoration and add no value to your tank.

Are moss balls safe for snails?

Yes, snails and moss balls can live in harmony. However, they might sometimes nibble on the moss balls in a bid to get food off of it.

Can moss balls live in saltwater?

It will live for a short while and then die polluting your tank. They prefer freshwater aquariums. Nonetheless, they can still survive in brackish tanks.

2 thoughts on “How Many Marimo Moss Balls Per Gallon? (Care Guide)”