Ammonia is a naturally occurring gas that is invisible and toxic to your fish in high concentrations. At lower concentrations, it creates a non-conducive environment for your fishes and will ultimately kill everything in your tank if left untreated.

Often known as a silent killer, ammonia at high concentrations has a pungent smell but generally has no telltale signs at lower concentrations. The first signs of struggle usually spell irreversible disaster within your aquarium.

But as always, it usually isn’t that simple and there is much more to the picture. In today’s article, we talk about ammonia as well as how to control it.

To have a better understanding of ammonia, we need to have an understanding of how it comes about as well as how it gets broken down. Most problems within the aquarium arise because of inept knowledge of the nitrogen cycle.

Once we have a good grasp of this concept, controlling ammonia is not too difficult.

Ammonia is a naturally occurring compound that comes about during the breakdown of organic material. In the fish tank, ammonia comes about by the decomposition of any organic matter, which can include uneaten food, dead livestock, fish excrement, etc.

It can occur both as a gas or in an aqueous solution. More importantly, high concentrations of ammonia are toxic and will kill off most life within the aquarium.

Although most fish are can withstand low concentrations of ammonia, by and large, hobbyists try to keep ammonia to a minimum.

The nitrogen cycle revolves around 3 compounds. Namely ammonia (NH3), nitrite (NO2), and finally nitrates (NO3). The start of the cycle involves breaking down ammonia into nitrates and then finally into nitrates.

At each stage, different groups of bacteria are responsible for breaking down the respective compounds. Generally, they are classified as nitrifying bacteria.

In the hobby, you will commonly hear about ‘cycling’ the tank before putting any fish in the tank. The term ‘cycling’ basically means to let the tank run a full course of the nitrogen cycle to build up a healthy colony of bacteria.

Depending on the volume of water in your tank, cycling the tank can take anywhere from 2-8 weeks. Of course, the smaller your tank is, the faster the cycle completes itself. 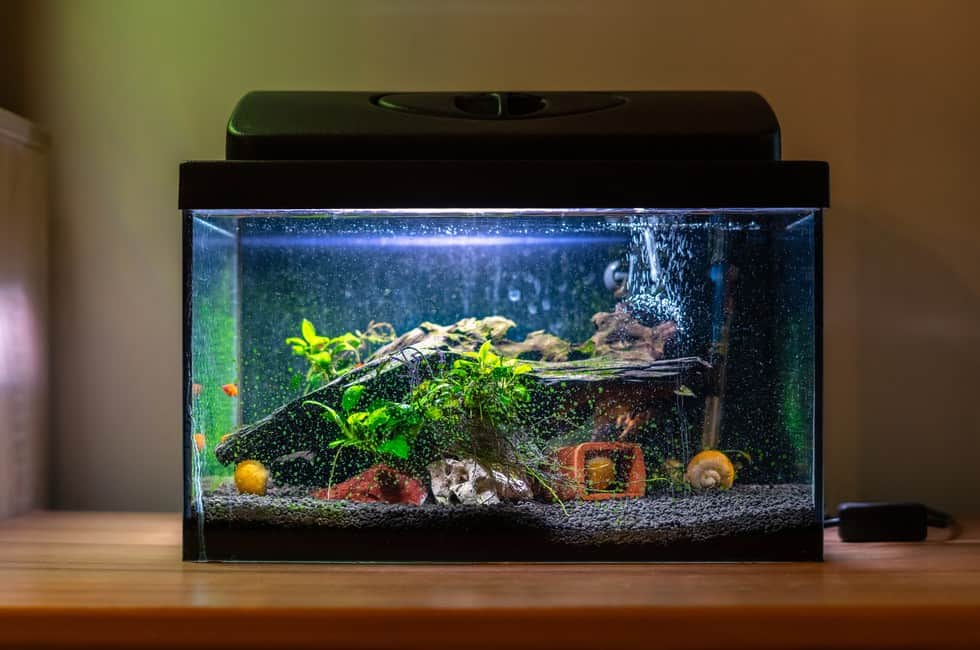 Cycling the tank is the first and most important step in lowering amounts of ammonia in your tank.

Novice fish keepers often make the mistake of rushing to add their new fishes into their aquarium as soon as they can. This poses a problem because there aren’t enough bacteria in the new tank to process excess nutrients like fish excrement and excess food.

Thus, it is pivotal to cycle your tank correctly. This is commonly done with a piece of raw shrimp to introduce a food source for the bacteria colony to grow.

Some keepers opt to use a goldfish or guppy to cycle the tank, however this is not recommended by us as it creates an incredibly stressful environment for these fish.

Naturally, this piece of shrimp will begin to decompose and produce ammonia, causing the bacteria that feed off ammonia to multiply.

Once this is done, all you will need to do is wait for the entire process to be over and your tank will have a healthy colony of bacteria that will negate the effects of ammonia when it is produced as it will be broken down quickly.

To keep track of the entire process, most keepers opt to use a test kit that tests for ammonia, nitrites, and nitrates(link to amazon). The cycle will have 3 clear spikes one after the other, ammonia first, followed by nitrites, and lastly nitrates.

When you see a spike in nitrates, it is a clear indication that the cycle is nearing completion. Also, the piece of shrimp would have completely decomposed.

So now that we know what the nitrogen cycle is and how important it is, there are certain products in the market today that will help you quicken the cycling process. Either by introducing specialized nitrifying bacteria or certain nutrients that these bacteria need to colonize faster.

That said, these products will not replace the cycle and are only designed to speed up the process. They are not essential in cycling a tank, but will reduce the cycling time significantly, just be sure to follow the instructions!

Here are some products on Amazon to check out!

Generally, well-cycled tanks rarely have problems with ammonia, and more problems with nitrates. However, both problems often have the same remedies and are relatively easy to solve if you know what to do.

However, ammonia poisoning is swift to kill. Thankfully, the signs are plenty and its best to act as quickly as you can when you see signs like those listed below.

Signs of high levels of ammonia

Once you’ve determined that there is an ammonia spike in your tank, either via a test kit or observing the symptoms above, reducing the amount of ammonia in the tank is simple.

An imminent water change. Changing about 50% of the water will dilute the amount of ammonia in the tank by 50% as well, of course, this is assuming the source of water you are using has negligible levels of ammonia.

Water changes not only reduce the amount of ammonia but also introduce a well needed fresh burst of oxygen for the fishes in the tank. However, sometimes a single water change is not enough and multiple changes might be needed to quickly lower the amount of an ammonia in the tank.

But, water changes are usually a temporary measure in reducing an ammonia spike. So, unless the root cause is addressed, the ammonia spike is likely to come back.

However, there are some things that you can do to reduce the likelihood of ammonia spike from coming back.

While not recommended, severe spikes sometimes require the addition of commercially available chemicals to rapidly decrease the concentration of ammonia within the tank.

These chemicals will solve the problem quickly but are usually not a long term solution, hence they are generally not recommended.

Below are some options you can consider if you choose to go this route (link to amazon):

Causes of an ammonia spike

There can be many causes of an ammonia spike, and like what we discussed in the earlier sections, reducing ammonia is relatively easy, either via regular water changes or through the  introduction of ammonia reducing filter media.

But often, these measures do not solve the root causes of an ammonia spike. A simple rule of thumb to remember when looking for a cause is, ‘ammonia arises from decaying matter’.

That said, below are 4 common causes of an ammonia spike.

New tank syndrome is a colloquial term that hobbyists use to describe deaths that happen in tanks that are usually below 2 months old.

That said, new tank syndrome often occurs due to an inefficient biological filter, hence it is extremely important to cycle your tank well and to cycle it right before any addition of fish.

New tank syndrome can also occur due to lousy care either due to inexperience or negligence, causing ammonia levels to skyrocket. We often see this when new keepers overfeed their fishes or neglect water changes.

The problem with overfeeding is usually not the fishes not being able to get their fill, but rather the leftover food which fishes generally steer away from.

Leftover food tends to rot quickly and will cause a spike in ammonia if left alone. Always remember that it is more likely that your fish dies from an ammonia spike than hunger, so feed sparingly. 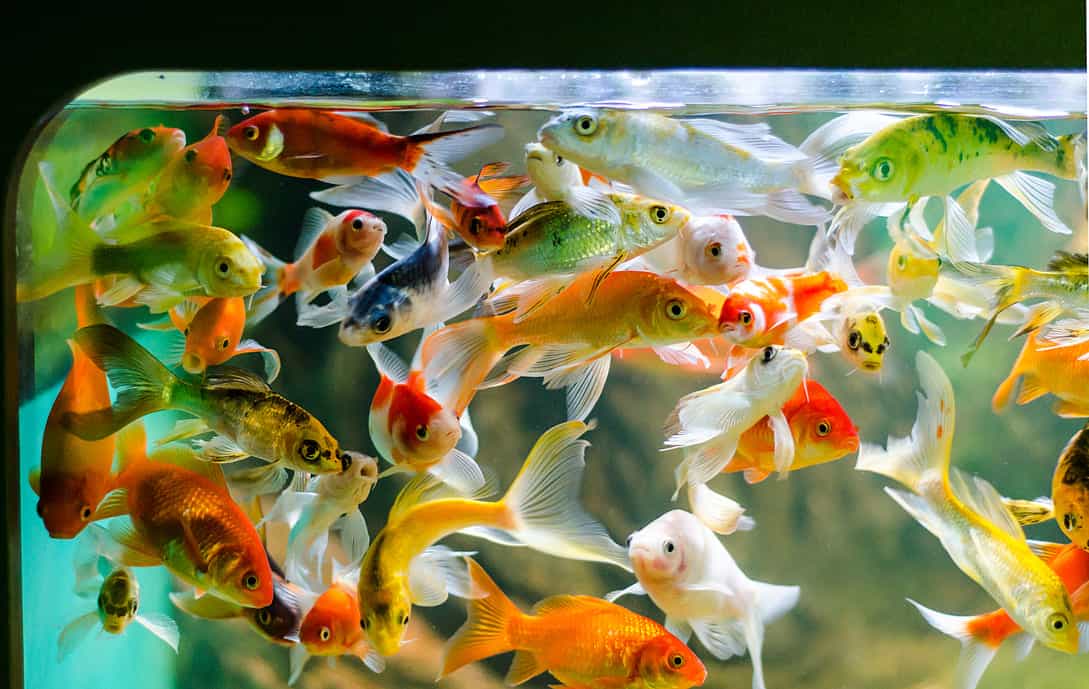 Keeping too many fish in a single tank often is a spell for disaster. Coupled with overfeeding, overpopulation often causes many problems, one of which is an ammonia spike due to the amount of waste produced by so many fishes at the same time.

More fish eat more food and produce more waste. Ammonia spikes that stem from overpopulation tend to come from more mature tanks as owners think that their tank can handle a bigger bioload.

Remember to keep up with your regular maintenance schedule and your tank should thrive!

Managing ammonia levels in tanks can be a tedious task if you have neglected the tank, either by not following your maintenance schedule or overfeeding. It doesn’t matter, what matters is that prevention is always better than the cure.

Cycling your tank is a critical step in any fish keepers journey and if done properly will reward you with an amazing looking tank. However spikes do happen occasionally like what we discussed above and if you stick to the measures we’ve discussed, your tank will be just fine.

We tend to avoid using chemical additives to reduce ammonia levels, due to the many repercussions that can occur when using them even though they do the job well and do it immediately. Chemical additives should only be used as a last resort when all other measures have been taken.

Thank you for reading this article, we hope that you had as much fun reading it as we did putting it together!