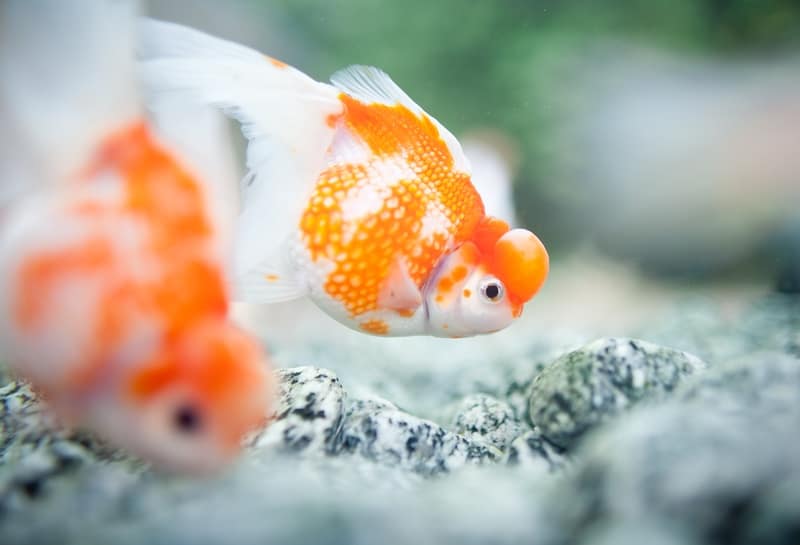 After keeping goldfish for some time, keeper often wonder, hey is my pet a male or a female? While it is quite tricky to tell them apart, there are some proven methods that do work and we’ll cover those in this article today!

Additionally, we’ll also be talking about how and when goldfish breed, so be sure to read the entire article to find out and equip yourselves!

How can we tell the difference between male and female goldfish? The easiest method to tell a male from a female goldfish is by their breeding tubercles. These tubercles are most pronounced during the breeding season.

However, there are 3 main methods hobbyists use to tell the difference, which we’ll cover in the article below!

We’ll cover these methods in detail so be sure to read the entire article.

How To Sex Your Goldfish?

Criteria Before we dive right into how to sex your goldfish, it is important that 2 criteria are met so that we can increase the accuracy of our sexing results.

Age: Generally, goldfish become sexually mature between 9 months to 1 year of age. Any younger and it will be almost impossible to sex them visually.

Breeding season: Goldfish while hardy and will thrive a wide range of water parameters, are traditionally a cold-water fish. This means that in the wild, originate from colder parts of the planet and do very well without a heater. In the US, this typically happens between the months of March and June.

This is an important fact because the change in temperature triggers a breeding response in most goldfish and as such will be a critical factor in determining the sex of your fish.

Sexually mature females are generally slightly shorter and rounder in size as compared to their male counterparts.

During the breeding season, sexually mature females become gravid with eggs which will sometimes cause them to look swollen and bloated. However, a point to take note of is that this can also be a sign of illness.

So be sure that your fish is always well taken care of and you are absolutely sure that they’re healthy. Also, males generally are not as round and are slightly more lengthy than females.

The best way to see this is to compare a group of mature goldfish from the top as this will enable to see clearly the differences in the abdomen size, increasing the accuracy of your results. That said, this method is often the most unreliable and is generally used as a confirmation from other methods.

One of the easiest ways to sex a goldfish is by looking at their gill plates for white dots, which look like little pearls.

That said, sometimes males do not display these breeding tubercles as it strongly depends on the environment and age. Also, there are illnesses which look very similar, for example, rich were white spots start to show up on the fish’s body. Ich is a parasite and is a common disease when keeping fish, however not to fret, it is easily curable with medication.

Breeding tubercles also tend to be a lot more pronounced during breeding season as such, it is important that you do this only during the breeding months when your fishes are sexually active to get the best results.

This method is only possible if you have a group of goldfish where males and females are present.

During the breeding months, males will start to push and chase females around the tank to encourage them to release their eggs so they have a chance to fertilize them.

How this happens is that males will use their heads to nudge and prod at females.

This “chase” usually only happens once the females are ready to do release their eggs as they will also release special pheromones into the water signaling males to chase them. During this process, males often are seen nudging the underside of the females.

So figure out who’s chasing who and you’ll know the sex of your goldfish.

Now that we’ve covered how to sex fish, what to look and when to do it, let’s look at how to breed goldfish.

Breeding goldfish should only be attempted after much research and preparation. Failure to do so could result in thousands of dead baby fishes.

Similar to what we’ve mentioned earlier, breeding happens in stages.

In the USA, the temperature starts to pick up in the months just before spring and will signal goldfish to come into season. When I say this, I don’t mean the goldfish knows that its time but rather, its body will react to the changes in its environment.

Once the above conditions are met, males will start chasing females around the tank. Nudging their belly, coaxing the females to release their eggs so that they can simultaneously release their milt and fertilize the eggs.

During this time you might realize that some females have some trouble swimming and seem to have overeaten, however, please do not worry as this is a normal reaction during the breeding season.

However this process usually only takes place at the height of the breeding season and only when the females are actually ready. Like what I mentioned earlier, once ready, the females will release pheromones into the water.

These pheromones act as a traffic light for the male fishes giving them the green light to start chasing the females. While sometimes chasing happens before the pheromones are released, the majority of this ritual happens only when the females are ready.

After the mating ritual is complete and the females are successfully coaxed, she will then lay her eggs.

In the wild, females tend to lay their eggs on smooth fixed surfaces, such as the leaves of plants or a smooth rock. In the fish tank, the goldfish will lay her eggs on almost any surface. So it is important to take extra precautions during this period.

Generally, goldfish will spawn multiple times a season and easily lay in excess of 1000 eggs at a time. It is also good to note that goldfish eggs are extremely sticky and will stick to almost anything.

Some breeders choose to put “spawning mops” (which are essentially strands of yarn) as a medium for the females to lay their eggs on so as to facilitate easy removal of the eggs once they’ve been laid.

Hatching usually takes place between 2 to 7 days after the eggs have been laid. In warmer climates, eggs will hatch earlier and in colder climates, it will take longer. Generally, if the amount of time has crossed 7 or 8 days, it is an indication that the eggs are unfertilized.

Upon hatching, you will see that they look like tiny worms that swim (in a jerking motion) in the upright position. Much like mosquito larvae.

Goldfish do not take care of their young. And as such, it is imperative that you provide enough hiding places and shelter for the fries.

During the first 2 days, the fries are generally not active and will be seen hanging near the bottom or on the sides of the tank. It is common to only start feeding the fries after the first 1-2 days from hatching once they are free-swimming.

Experienced hobbyist tends to stick with live food for the first month and highly recommend that as commercially available fry food tend to lack the correct nutrients for the fries to grow and will cause problems.

Some examples of live food that are popular are, baby brine shrimp, infusoria, and mosquito wrigglers.

How much space do I need to breed goldfish?

The general rule of thumb for the amount of space is 1 gallon of water per 1 inch of fish. However, for a pair of fully grown goldfish, I would recommend no less than a 30-gallon tank. It is also more important that you maintain the quality of the water as opposed to the size of the tank.

Does the fry require a filter?

While it is not a must to have a filter in the tank, it is definitely recommended. For a fry tank, a sponge filter is most suitable as it not only is a gentle way of filtering the water but also aerates the water at the same time.

Sexing goldfishes is a tricky business. Not only are they very similar. But also they are constantly on the move, making hard to spot the minute differences.

That said, with some time and patience, anyone will be able to sex a goldfish accurately as long as you follow the guidelines listed above.

If you have successfully sexed your goldfish. And are confident that you are now well equipped with proper knowledge, breeding goldfish is vastly satisfying. And rewarding experience as well.

I hope you found this article as fun and informative as I did, thanks for reading!