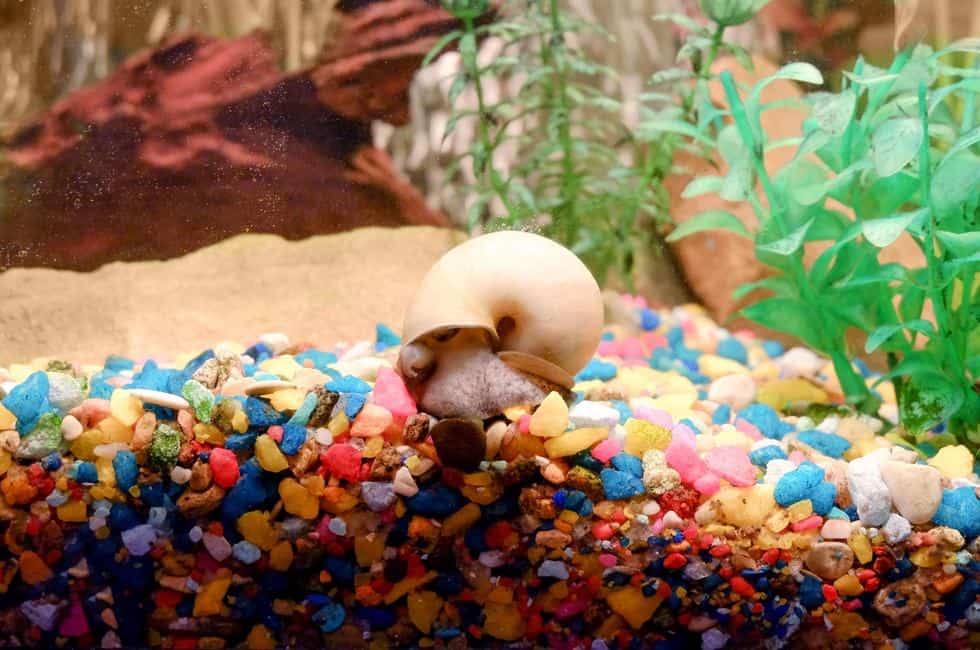 Have you ever reared a snail, and then been unsure how to tell if it’s alive or dead? This article will teach you how to know the difference, and what you should do if you find out the snail is dead.

Land snails will normally leave a trail of mucus behind them as they slide along. They feed mostly on green leaves, including spinach, and lettuce.

You can also check this Snails Combo on Amazon.

Is my Snail Dead or Just Asleep?

Do you ever get confused, wondering if your snail is sleeping or dead? Snails do hibernate for several days at a time. They may sit in the same spot, and stop suctioning on the walls of the tank.

If after 2 days your snail has not moved, then you should consider the smell test. If the snail does not reek, then it is probably alive. You may want to nudge it a few times to see if it moves.

Perhaps the only way to really be certain whether your snail is alive or dead is to physically examine it. Pull it up gently, and if the body slowly withdraws into the shell, then it is alive. Do not remove the snail from the tank for too long though, as if it dries out too much, then it will die.

Occasionally, freshwater snails inside an aquarium will look like they are dead, remaining inactive for several days. Sometimes the snail may even float to the surface of the tank – this is due to excess air in their lungs. A gentle push should bring the snail back to an active state.

You can also determine if a snail is still alive by looking at its trapdoor. This will remain shut all the time that the snail is alive. But if its trapdoor is open, then it will be dead.

What happens when a Snail Dies?

If the snail body is no longer inside its shell, or if the body hangs out of the shell and doesn’t move, then the snail has died. Make sure you remove a dead snail from the aquarium as soon as possible to prevent the spread of disease.

Contrary to popular belief, snails are fused to their shells and do not crawl out of their shells when they die – although their body may fall out.

The first noticeable sign that your snail has died is the smell. The smell will get stronger for the first 24 hours after death. The snail will also fall to one side.

What to do with a Dead Snail

The first thing to do when you notice a dead snail is to remove it from the tank and replace the water immediately. The guts of the snail will decompose rapidly a few hours after death, but the shell will not decompose until it is crushed.

Removing a dead snail from the tank must be done very carefully, especially if there are other snails in the tank. Before removing the dead snail, it is important to first transfer any remaining living snails into a separate tank with clean water.

Then remove the dead snail and completely change the water in the tank. This will help reduce the risk of any disease potentially spreading to the living snails.

Sometimes, a Mystery Snail will withdraw into its shell for a few days. This is normal – it will do this to escape everyday challenges. But when a Mystery Snail is out of its shell and completely inactive, the snail is definitely dead.

A Mystery Snail will decompose very quickly. This can pollute the water and is detrimental to the health of other aquatic animals and plants.

Other Ways to Tell if a Snail is Dead

Sometimes a snail can be inactive, withdrawing into its shell, when conditions are not very favorable. In most cases, the warmer the water, the more active the snail becomes. When water temperature cools, the snail will slow down.

For this reason, just nudging the snail’s shell cannot confirm for definite whether it is alive or not. You just have to keep smelling it. If a snail is dead, it will also fall out of its shell after a gentle shake.

Holding the snail against a lamp bulb is another way to detect whether it is dead or alive. You can actually see through the shell when you hold it up to a light bulb. If the inside of the snail has shrunk within the shell, then it is dead.

If a snail doesn’t respond to your touch, you may want to transfer it into a small, clean container of freshwater. If the snail does not become active even after changing its environment, then it is probably dead.

What else you should know about Mystery Snails

Mystery snails are freshwater snails and are found in many parts of the world. They prefer moist, wet, shady forests and woods. When cared for correctly, captive Mystery Snails can live up to 3 years and reach their full body size.

Snails prefer to live in water temperatures of between 75°F-86°F. The speed at which the snails grow will slow down when they are 8 months old. For the first 8 months, a snail may grow at between 0.21mm and 0.25mm per day. After this, their growth rate slows to between 0.11mm and 0.13mm per day.

Snails are naturally herbivorous and will consume all kinds of edible vegetables.

Essential Tips and Ideas to Protect Your Snail in the Tank

Avoid fish! As a beginner, you should try not to raise snails in the same tank as fish. A wide range of fish species are known to eat smaller snails.

Make sure you raise snails of the same species and nature. Do not overcrowd the tank with too many snails as this may cause diseases to spread quickly.

When choosing a tank to rear snails, you need to consider the maximum number of snails you will rear. If you are rearing 1 or 2 snails, you should consider a tank that is a minimum of 1.8 gallons.

If you are rearing 6-9 snails, then your tank should be a minimum of 4.4 gallons. A 22-gallon tank is required for 20 to 50 snails. If you plan on breeding snails, then you should consider a minimum tank size of 40 gallons.

Make sure you de-chlorinate your clean, freshwater by allowing it to sit for about 24 hours.  Do not use additives in the water but use recommended Bio-starters, beneficial bacteria and heavy metal removers.

Make sure the pH level ranges between 7 and 7.5. Make sure you test the pH levels of the tank water every day, to maintain the proper ammonia and nitrates levels.

Get this Aquarium Water test Kit, its really helpful!

Snails will prefer a substrate of pebbles and gravel, rather than sand – but make sure the gravel and pebbles are smooth, with no sharp edges.

Avoid the use of red and orange natural stones in the tank because they contain higher levels of copper that can be highly toxic to snails.

Make sure the pebbles and gravel are thoroughly rinsed before adding them to the tank.

Do not feed your snails right away – give them up to 8 hours in their new environment before feeding them. Snails can be fed with cooked veggies such as blanched carrots, cabbage, cucumber, broccoli, zucchini, spinach, and cauliflower.

Snails are slow eaters, hence it is really important not to over-feed them. Snails should be fed a maximum of once or twice in a day, and any food not consumed at the previous meal must be removed from the water early the following morning.

Snail fecal materials can significantly raise the pH levels of the water, and that can trigger severe diseases that can quickly kill an entire population of snails.

6 thoughts on “How to Tell if a Snail is Dead, For Sure”

link to What to Feed Betta Fish When Out of Food