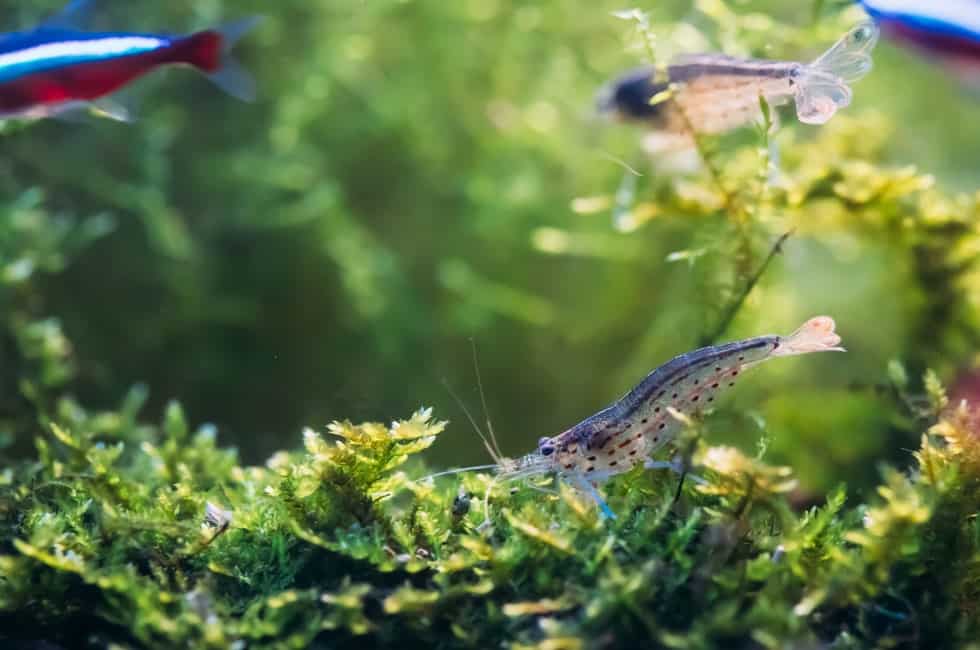 This article is written to help you understand the main differences between the Amano and the Ghost shrimps. Though they are shrimps with similar biological and physical resemblances, they do differ in so many ways.

What’s the difference between Amano Shrimp and Ghost shrimp? The answer is simple, Amano shrimp is native to Japan, while the ghost is native to the southern part of the United States of America.

What Kind of Fish Can Live with the Ghost Shrimp?

There are so many fish species that can live with the ghost shrimp inside an aquarium. Ghost shrimp is an easy to raise, freshwater shrimp that thrives at pH of between 6 and 8.

Red Crystal is one of the few fishes that can live with Ghost shrimp in a tank. Ghost shrimp rarely interact with tank mates this does not mean they should be kept with aggressive species.

You should also avoid keeping larger size fishes with smaller shrimps, they could be predatory to the Ghost shrimps.

The Ghost shrimp can live comfortably with aquatic animals such as the small tetras, livebearers, and the Rasboras. Other small fishes that cannot be eaten by ghost shrimp can also be great tank companions. It is important to keep all aggressive fishes away from the tank.

Do Ghost Shrimp Eat Other Shrimps?

The answer to this question is a straight yes. Larger Ghost shrimps have been found to eat smaller Amano shrimps. Ghost shrimps are often discovered eating decaying and dead plant matter, They can also consume any soft edible matter that is accumulating especially at the bottom of the tank.

Though most ghost shrimps will eat other shrimps when the population is high and the competition is becoming fierce. The bulk of the ghost shrimp diet comes from algae growing on surfaces.

Most times Ghost shrimps will eat other dead shrimps, but this could cause the spread of certain parasitic diseases, For this reason, a dead shrimp must be removed as soon as it is discovered inside the tank.

What Do Ghost Shrimp Do?

Ghost shrimps prefer low current since they enjoy spending their time in the lower levels or bottom of the tank. They also enjoy exploring a sandy substrate for foods that sunk to the bottom. They do rely on logs, rocks, and plants to hide from perceived predators.

In addition to algae, ghost shrimps can feed on eggs or larvae of other fishes and smaller insects. They will require fine grain substrate because the antenna on their face may get damaged when they rub it against hard surfaces.

Ghost shrimp-derived its name from its almost transparent body and sometimes it is referred to as the “Glass shrimp”. Its stomach can be seen through its transparent body.

The ghost shrimp is capable of molting a new exoskeleton every few months, as it grows older, this exoskeleton must harden in order to prevent the shrimp from being vulnerable to external elements.

The body of the ghost fish is segmented and has 10 pairs of legs and most times the first 4 legs are used for feeding because they contain the tiny claws.

The adult female ghost shrimps can be found with pink-colored eggs or the baby shrimps, located under the belly. The female shrimp will shake the eggs gently as she swims around by moving the swimmerets just to ensure that the eggs get enough Oxygen.

Females that carry the eggs should be relocated to new tanks. And they can be taken back into the main tank once they release their babies.

The reason for the relocation of female ghost shrimps is that the eggs they lay look like mosquito eggs and can be eaten by smaller fish tank mates. 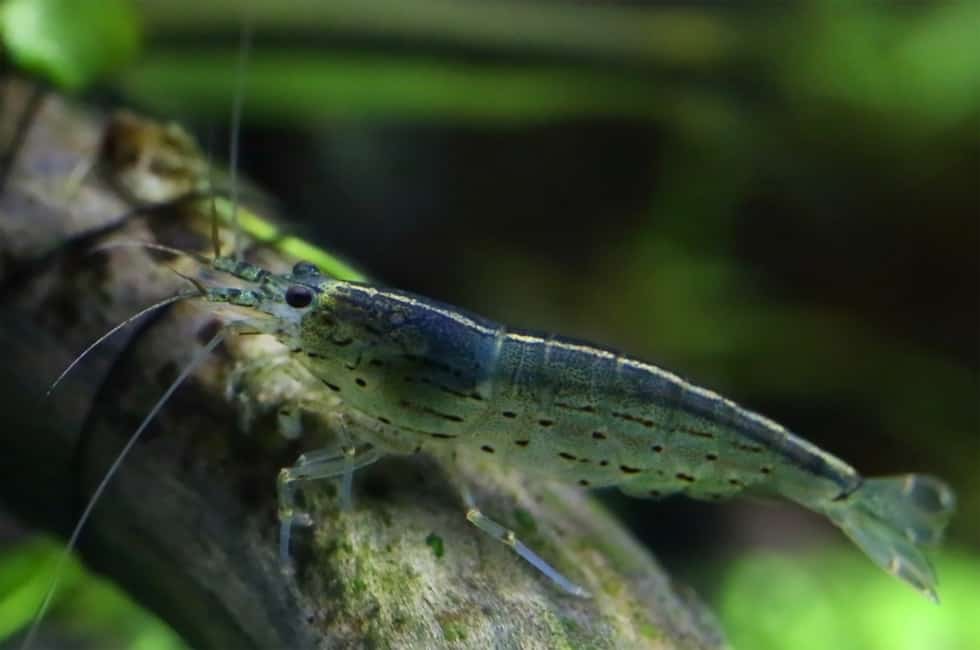 Factors such as living water conditions, feeding and diseases may affect the size of both shrimps. In the wild, both Amano and Ghost shrimp should attain their full sizes, however, in the tank, they may become few centimeters shorter probably due to unfavorable or fluctuating tank conditions.

The Ghost shrimps may survive in the 10-gallon tank, even at full maturity and if there is just 1 tank mate. The Amano, on the other hand, will require up to 20-gallon tank.

While the female Ghost shrimp can reach 1.5 inches, the males don’t grow beyond 1 inch.

What’s the Difference Between Amano and Ghost Shrimp?

The main difference between Amano and Ghost shrimp is that, while Ghost shrimp thrives only in freshwater, Amano survives in salty or slightly alkaline water. Amano will survive in pH levels of between 8 and 8.5

The maximum growth length is another major difference between Ghost and Amano shrimps. The Ghost shrimp can go to a maximum length of 1.5 inches while Amano can grow until 2 inches.

Amano shrimps are also known to have shorter claws than Ghost shrimps. Ghost shrimp provide a much sharper claw grip than Amano.

Another major difference between the two is the diet. Amano predominantly feeds algae while ghost shrimp can feed on blood worm and some other aquatic animals.

When it comes to breeding Ghost shrimps breed faster than Amano shrimp. Amano originated from Japan where a famous Japanese cyclist- Takashi Amano, introduced the fish species to the world. The Ghost shrimp, on the other hand, originated from the southern region of the United States.

Ghost shrimps are known to be more delicate to changing water conditions especially when they are not well taken care of.

Amano shrimps are considered to be excellent tank cleaners because they consume algae much faster than the ghost shrimp. While Amano shrimp only consumes algae, ghost shrimp will consume some other aquatic animals in addition to algae.

Healthy Amano shrimps will help you eliminate algae growth in your tank, which will aid its cleanliness. Both Amino and Ghost shrimps are considered to be omnivore aquatic animals.

The breeding style of Ghost shrimps is different from Amano shrimps. Ghost shrimp will morph in fresh water while Amano morphs inside salt water. Ghost shrimps breed faster and that is why they are mostly used as feeder food for other fishes.

The Amano larvae will require at least 1 month inside the salt water to survive inside a tank. What this means is that growing a shrimp colony should be easier since they easily transfer into a tank.

If you have to raise Amano, then you need a separate tank to transfer the larvae. You need to ensure that the tank conditions are good enough to support the growth of Amano larvae.

When it comes to price, ghost shrimps are a lot cheaper than Amano shrimps because they can be easily raised and maintained.

When treated poorly, ghost shrimps may not live longer than a few months. In some researches conducted, the survival rate for most ghost shrimps is 40%.

When it comes to appearances, the ghost shrimps do have some little markings on their bodies. It can be difficult to tell the differences between the male and female ghost shrimps.

You may want to check the belly shape of a ghost shrimp to ascertain whether it is male or female. The make ghost shrimps tend to have slender bellies while the females have a more rounded belly.

It is easier to differentiate between the male and female Amano shrimps. The female does have elongated markings while the males have rounded markings.

The Ghost shrimp have a shorter lifespan than Amano shrimps, and for this reason, there are certain steps you should take to prolong their lives. In addition to their regular diet which is algae, it is important to feed them varieties of diet to increase their intake of nutrients.

Ghost shrimps can tolerate diets rich in oils and fats. While store-purchased foods may contain high fat and oil contents, you should include mostly the live and frozen diets more.

Algae will provide the much-needed protein, you should consider other foods such as baby shrimp, fish pellet, Daphnia, insects, mosquito larvae, squid, flake foods and some fish veggies.

Make sure you add foods such as pellet foods slowly because they can sink and the ghost shrimp may miss it. Ghost shrimps will require a smaller amount of food to keep them going. Ghost shrimps can survive for up to 4 days without food but that could cause malnourishment.

Maintaining good tank temperature is important when it comes to raising ghost and Amano shrimps. Amano shrimps can withstand slightly colder and warmer temperatures but ghost shrimps must be kept at room temperature for optimal performance.

It is also important that you change tank water more frequently with ghost shrimps. While Amano shrimps can survive in slightly high alkaline water of about 8.5pH, Ghost shrimps cannot survive for long in salty water with high pH.

The presence of dead matter, including dead plants and wood can cause the pH of the water to change quickly.

Make sure all dead matter is removed from the tank as they are discovered. It is recommended that you change between 10-20% of tank water for ghost shrimps on a daily basis, to maintain the pH and temperature. You may also want to use a filter to increase the Oxygen supply levels in the tank.

Consider increasing the size of the tank for ghost shrimps if you plan to introduce more than 1 tank mate. The tank mate should be of the same size as the shrimp and non-aggressive, otherwise one may become a predator to the other and you may lose a tank mate.

It is important to keep tank temperatures at between 65 to 80 F degree to ensure that the fish to get extremely heated up inside the water. Make sure the tank is not placed directly in the sun’s direction, which could heat up the water quickly.

The fact that ghost shrimps live a relatively short life, is another consideration. Amano shrimps can withstand alkaline water for a while, the ghost shrimp die quickly.

Whether you choose the ghost or Amano shrimps, another important thing you should note is that taking care of the aquarium is more important than any other thing because it ensures that the shrimps live longer.

Replacing the water as quickly as you can, will prevent the growth and spread of parasitic and bacterial infections.

It is also important that you are aware of the health status of the shrimps you are buying. You may need the help of an expert in this field to help you ascertain whether you are purchasing healthy shrimps or not.

Make sure you keep to all instructions available on the shrimps when you purchase them, following such instructions will further contribute to healthy rearing of the shrimps in your aquarium.