Aquarium mosses are a beautiful addition to any planted tank. They generally require next to no care and can thrive in a wide range of water conditions. Not only do they brighten the aquatic scenery, but they can also serve as a hiding and egg-laying spot for many species.

There are many different kinds of mosses but today we will review two of the most common ones – Christmas Moss and Java Moss. These two types are among the easiest to look after and have some similarities.

With this said, what is the difference between the Christmas Moss and the Java Moss? To begin with, Java Moss is considered to be the easiest to look after. It will survive in all water conditions and is suggested as the best option for aquariums with low light and less equipment. While Java Moss is great for filling spaces with greenery, the Christmas Moss tends to grow flat and will entirely cover anything you attach it to.

In addition, it grows slowly and demands a lot of light as well as CO2, which stimulates its growth and color.

Below, you can read about the differences between these two kinds of mosses, in addition to an in-depth explanation of each type.

Although it originates from Southeast Asia, Java Moss is nowadays the most widespread and preferred kind of moss. It is one of the easiest plants to grow. Compared to most other plants, and mosses in particular, it is exceptionally durable and will grow and stay green in harsh water conditions that would kill almost everything else.

Java Moss loves moving waters. My tip is to always attach it to something – rocks, roots, structures etc. If there is a current in your tank and the Java Moss is not attached to something it will hold on to any tubing it finds and this is not really something that you want to happen.

It has no real roots, but it uses something called rhizoids that are similar to roots but do not absorb nutrients. This kind of moss uses its leaves and stems for this particular process.

As I have already mentioned, the Java Moss will thrive in a variety of water conditions. It will survive in an impressive range of pH and temperatures, but there are, of course, water parameters that will make this moss flourish.

See below a small table with the widest range of water conditions, followed by an in-depth discussion of its growth and maintenance requirements.

The most perfect temperature for Java moss is between 20°C and 24°C. Aquarium temperatures in this range will stimulate growth and coloration. This kind of moss is a slow-to-medium grower and it requires almost no light, unlike Christmas Moss, for example.

Although it is not a necessity, if you want to stimulate its growth you can add CO2. Additionally, once you put it in its place, do not move it as this will interrupt its growing process.

In addition to its low level requirements, maintenance is not necessary. You don’t have to do anything to it, apart from trimming it, which is a personal choice really. Even if you leave it to grow wild, it will be beautiful and catch the eye. To trim it, simply use regular scissors, but once again do not move the plant itself.

Algae is the one single problem that may occur with Java Moss. To be fair, it mainly depends on how well you take care of your tank. Algae usually appear when water conditions are poor for any period of time. It could also appear when you use CO2 to stimulate growth, as mentioned above.

Small amounts of algae will benefit your tank, but if you do nothing about it, it can get out of hand. If algae grow deep into your Java Moss, it is almost impossible to remove and therefore your safest bet is to simply remove the moss and start again with a brand new plant.

To remove algae, you can use a variety of chemicals or simply buy algae-eating shrimps or fish. 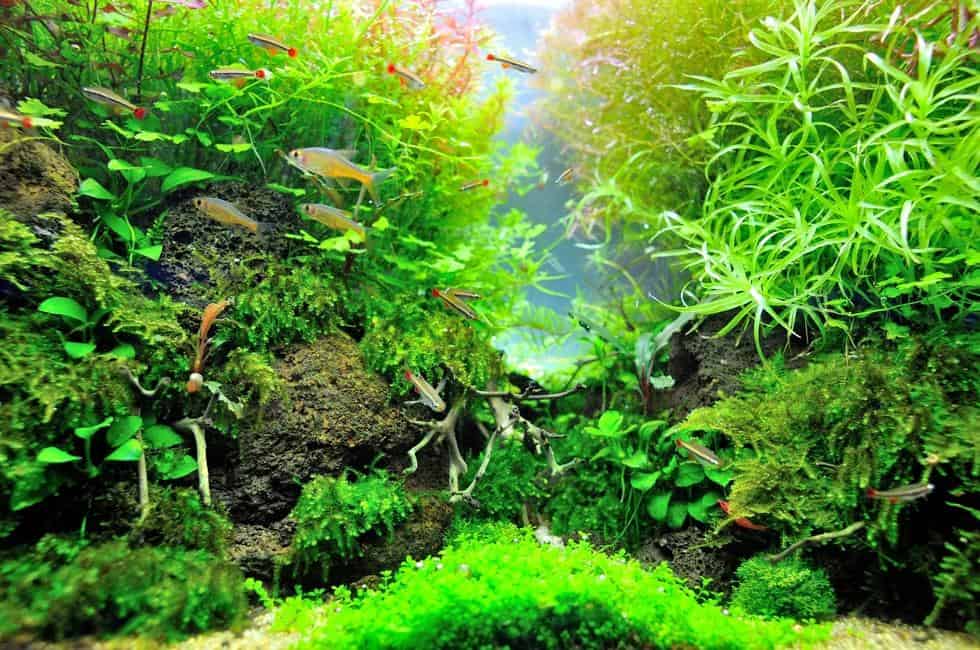 Christmas Moss obviously gets its name from the triangular shape of its leaves, which resemble the branches of a fir tree. Originally, it comes from Brazil but is now slowly becoming available worldwide. It is normally used to create a wall or a carpet in an aquarium. In addition, it is known to remove nitrogen. Compared to Java Moss, it is a slower grower and it has completely different requirements.

Another difference is that it grows faster when the water is warmer. Since it often grows flat, it is a great option for covering large pieces of driftwood and rocks. If you are patient enough, it will cover them entirely.

It can also be used to create a carpet on the ground of the aquarium, although again it could become home to algae. Another way to stimulate its growth is by adding CO2, although this might not work with such a slow-growing plant.

In terms of maintenance, the Christmas Moss requires more trimming than the Java Moss. It isn’t essential, but it will certainly help it to survive and grow. Read below to find out what could happen if you decide to not prune it.

Algae is once again the major issue, as it is with most plants – and mosses in particular. If the water parameters are imbalanced, it could lead to a nest of algae forming in the moss. Control measures are similar to those with Java Moss, and include chemicals or algae-eating species of fish and shrimps.

As mentioned above, not trimming the Christmas Moss can lead to the plant dying. Although it does not happen to everyone, if you see leaves turning brown, it’s time to consider pruning it.

Such problems can occur immediately after you buy the plant, simply because you are introducing it to a completely different tank. Otherwise, similar to the problem with algae, it can occur after changes in temperature and other water parameters.

Christmas Moss vs. Java Moss. Which one to choose?

To be fair, these two plants are not too different in terms of appearance and could often be mistaken as the same thing. When you buy them, make sure it is from a reputable store in order to ensure you get the correct moss.

Other than that, it all depends on what you actually want, and the aquarium itself. You now know the different requirements of each moss. Java Moss will feel most comfortable in cooler water while Christmas Moss will grow and survive in warmer temperatures.

In addition, if there is not enough light in the tank, Java Moss is the better choice. It is also the easiest to look after, which makes it perfect for beginners. In the end, it also depends on what type of greenery you want. I consider Java Moss to be a plant that I can use to fill in empty spots, while I would use Christmas Moss to completely cover rocks or driftwoods, or to create a wall at the back of my tank.

Is moss good for a fish tank?

Besides being a beautiful addition to your landscape, moss has other benefits as well. It absorbs waste such as nitrates. Moss also provides cover for small inhabitants such as shrimps or small fish and can be used as an egg-laying spot.

It is actually one of the most invasive plants you can find. Once the roots attach themselves, you will be hard pushed to entirely remove them. If you do decide that you no longer want to have it in your tank, you will most likely have to remove the whole rock or piece of driftwood that it is attached to. This is also the main reason why it is so good for covering things!

What does Java Moss do in a tank?

Java Moss can be used for a variety of purposes. You already know how great it looks in a tank, when it is attached to an object. Even if you have a tank that has no fish you can keep it as a refreshing landscape.

Besides that, it is often used as a hiding spot by small species of fish and even a place to lay eggs.

Hello Mr Kumar, My name is Elliston Scovell living in Australia but I am originally from Sri Lanka and had fish for a few years without problems need less to say I used well water hence no problems but not the same for Australia. I am trying desperately to grow red plants and finally did but it was very disappointing to learn that these plants grew side shoots and was very messy therefore I removed the lot. Can you give me a list of plants ( red ) that do not have this problem, I look at Dutch aquariums but I cannot get any info. I am using CO2 and Dupla fertilisers any help will be appreciated Thank You, Elliston