Originally belonging to the country of China, Koi fish have been around since 200 AD. The mentions of this fish have been found in the written records of China and Japan. Koi fish are beautiful creatures that boast a white body with bright tangerine spots.

Koi fish were brought into Japan as a gift from China. One of the most common questions among fish enthusiasts is how much koi fish cost and if they are worth the cost. Koi fish cost around 10 to 15 dollars. And as far as their worth is concerned, we have discussed that in detail in this article!

How Much Are Koi Fish?

Koi fish are mostly used as garden fish in homes, restaurant decorations, and lounges with many varieties of colors. Because of their vibrant colors, koi fish are often raised in captivity which also lengthens their life span.

Koi fish are largely raised in Japan and some Japanese koi live up to 100 years. However, koi fish can be kept anywhere in the world as long as their needs are taken care of.

A few years back, a nine-year-old, Kohaku Koi donning tangerine spots on its milky white body was sold for 1.8 million dollars. There are many factors that one should learn about before getting koi fish for their aquarium or pond. Koi fish belong to the Cyprinidae family of fish and normally live up to 25 – 35 years.

Although the most commonly known Koi are white with bright tangerine spots on their body, there are over 100 types of koi fish and are priced differently based on their genes and availability.

Getting a koi fish can cost you as low as 1 dollar a pair, to 18 dollars, depending on the fish’s size, color, type, and quality.

If you want to get your koi fish imported from Japan, the cost of the tiny water dweller will be huge, but so will the quality.

Japanese fish farmers allow koi fish to grow according to the natural conditions, which leads them to have a longer life than usual. However, in western countries, koi fish are kept in unnatural and man-made conditions by fish farmers to allow the fish to grow in size easily.

Koi fish hibernate during the winter season and therefore do not feed or grow during the winter months. Western fish farmers usually keep koi fish in a warm environment during this time to create an illusion of early summer, which leads the fish to grow in size but not have a long life. 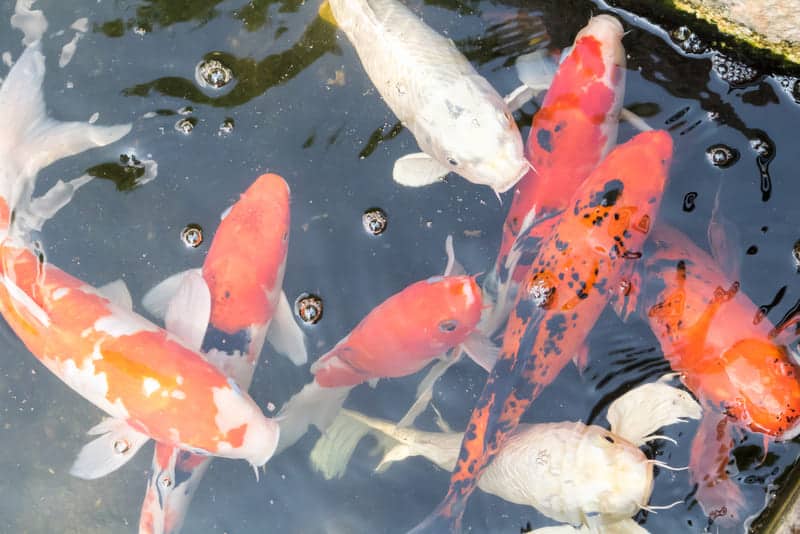 Therefore, it is important to research properly before getting your new water-friendly pet. Here is a list of the different types of koi fish and their cost:

What Affects the Price of Koi Fish?

Koi fish are not only orange and white but there are also several types of koi fish available in the market. The prices of the same are affected due to their color and pattern.

Although every koi fish is pretty, the more beautiful the patterns on the body of a koi, the costlier it is to get your hands on one.

Koi fish have been bred for ages, thus resulting in brilliant patterns and striking features! One of the most famously wanted koi patterns are bright red-orange, black, and silvery white.

An interesting fact to note is that people in Japan, initially wanted the koi to look like the National flag of Japan – White with a large red dot on their head.

If you know anything about koi fish, you would know that there are many different types of koi fish. Based on their color, type, and size they come at various prices.

This is also because of their genes. To know more about them we have to go back to the generations of koi fish that have been found across the world.

The genes of a koi fish affect price just like the genes of a purebred dog affect its price. The koi fish with the best genes is called Gosanke. The more unique the features of the koi fish, the more special its genes are.

Usually, Koi fish with special genes are more expensive than the cheaper variety found at a local store. These types of fish should be kept in a backyard pond rather than aquariums.

Koi fish can also be differentiated based on their body and fin type. In Japan, for example, koi fish usually have short and neat fins. Some fish farmers believe that long fins are a result of mutation and therefore are considered to be imperfect.

In the United States, however, koi fish have long fins and are called butterfly koi. This is because the long fins look like the wings of a butterfly.

Buyers usually pay attention to the skin, color, and pattern that a koi fish has. The more beautiful the pattern and size of the koi fish, the more expensive it will be.

The price of a koi fish also depends on its size. The larger the size the more expensive it is. Usually in Japan koi fish are of a smaller size. This is mainly because fish farmers in Japan focus more on the life span of the koi fish than its size.

In the United States, koi fish are fed a lot of protein-rich diets to help them grow to a larger size. Koi fish hibernate during the winter season and are unable to eat food and do not grow in size. In America, fish farmers have found a way across this problem.

Koi fish are kept in an artificially curated warm atmosphere during the winter season and have a protein-rich diet to help them grow to a larger size. During this time koi fish that are not allowed to hibernate eat lots of food and grow in size. This increases their price.

From a study of the growth rings on hold scales in July 1974, it was derived that she was indeed the oldest koi fish alive at the time.

The price of a Koi fish largely depends on its age. The older the Koi fish, the more it will cost to get your hands on it.

Young koi fish are not as expensive as the old ones because you can’t tell how long koi fish will be alive when it is still young. Some old koi fish can even be sold for millions of dollars.

Japanese koi fish are usually very strong and they live up to 70 – 100 years. This is because in Japan the main focus of the fish farmers is to increase the lifespan of their koi fish.

Female koi fish are usually more expensive. They can be identified by their long and round fins. They are usually used for breeding around the world.

Note that the sex of a koi fish usually does not create a huge price difference as domestic koi fish are more or less of the same price.

Are Koi Fish Worth the Money?

Apart from being a symbol of prosperity and longevity, koi fish are very expensive when compared to other pond fish. This is mainly because of many factors like size, color, genes, body shape, age, etc.

Koi fish are a great investment as long as you know about them and have proper knowledge about the breeds.

However, some important factors to keep in mind are climate, surroundings, and finance, before investing in koi fish. For instance, they cannot survive very long in countries like Malaysia purely due to the climatic conditions.

Koi fish need proper care throughout their life. Younger koi fish can be kept in groups, but with age, they become aggressive and need to be kept in individual ponds of water.

Koi fish should always be bought from a reputable buyer, who will even give you a birth certificate of the koi fish. These koi fish can be entered into competitions around the world which can fetch you a few extra dollars to spare too.

What Color Koi Fish Is the Most Expensive?

Koi fish come in a variety of colors and based on this they can be categorized as more or less expensive. Some of the most unique and expensive koi fish have very interesting color patterns on their body.

For instance, the Asagi koi has thorough patterns that look like a fish net on the entire body and red faded patterns towards the belly.

Scarlet koi, which has black spots on its tangerine-colored body, metallic golden spots on a silvery white body, and platinum white koi, are usually very expensive among others.

How Much Is the Most Expensive Koi Fish?

Although koi fish as a whole are expensive fish when compared to other fish that live in a pond, there are specific colors and types of koi fish that are at the top of the price range.

The red and white color koi fish are usually the most expensive. The Ki Utsuri Koi fish has patterns of gold and because of such intricate patterns, are usually very expensive.

The Kohaku Koi fish is by far the most expensive one. It is also known as Sarasa and has a white body with a reddish-orange pattern all over it. It is priced at the expensive cost of $1.8 million.

The Beni Kikokuryu koi fish comes next in line and has a beautiful black and tangerine pattern over its silvery white body. It is usually sold for $2000.

How Much Do Baby Koi Fish Cost?

Baby koi fish are usually less expensive than matured koi fish. This is because when young, the patterns that a koi fish will develop later on in life cannot be determined. The life span of the koi fish also remains unjudged.

Due to these reasons, baby koi fish are very affordable and available at $10.

Can You Breed Koi Fish?

Koi fish is largely bred across the world, especially in Japan. There are over 120 varieties of koi fish and this is the result of active breeding around the world.

Koi fish can be bred by individuals at home, but you must research properly before becoming a breeder.

Koi fish can give birth to thousands of babies at a time. However, not all of them are sufficient to be sold. There are several rounds of selection that happen in a koi fish breeding company.

The breeder chooses which fish do not have any disabilities, for example, fish missing a fin, covered scales, or missing tail.

The breeder then chooses which koi fish has the potential of having beautiful patterns in the future that could be sold at a fairly high price.

Do Koi Fish Grow At a Different Rate?

Koi fish usually grow at the same rate in their first year. This is usually based on the diet that is given, the water that they are living in, and the atmosphere that they are in. The better the living conditions, the faster they will grow.

A 6-month-old male is usually 5.1 inches or 13 cm. During this time the koi fish start developing the color patterns that it is to carry for the rest of its life.