Adding different Cichlids to your tank will brighten it up and keep the fish happy. Keeping different types of Cichlids together will be beneficial for both the water and the plant life inside the aquarium.

You may want to use natural breaks and plants to separate the Cichlids and you should ensure that water flow in the aquarium is slow, to help the Cichlids adjust.

Can You Keep Different Types of Cichlids Together? The answer is a simple Yes! However, you should be aware of their natural habitat. For instance, African Cichlids prefer slightly alkaline water and can be very aggressive.

You should also avoid keeping similar species of Cichlids together because they may produce undesirable hybrids. For instance, you should avoid putting two Auloncara species in the same aquarium. However, you can keep the Auloncara Cichlid species with other species such as Utaka and Mbuna.

You can check out this link for some really awesome Cichlids: Assorted African Cichlids on Amazon.

Cichlids That Can Live Together

Most South American Cichlids, including the freshwater Angelfish, are peaceful and are often regarded as being quite shy. These fish are compatible with each other. Though they may consume smaller fish species, they normally don’t consume similar cichlids.

Male Cichlids will fight for territory, and may eventually kill each other. For this reason, if you have a smaller tank, you should only keep one single male Cichlid.

It is important to avoid keeping species that are similarly aggressive in the same tank (aggression normally occurs in Cichlid species that are closely related). The more distantly-related the fish, the less likely they will become aggressive with each other.

Secondly, you need to ensure that any new fish are of a similar size to your existing fish.

Similarly, you should consider keeping smaller species (those measuring between 3 and 4 inches) with larger Danios. Larger Danios are large enough and wouldn’t be considered as a meal by other fish.

Can You Mix African and South American Cichlids?

The answer to whether you can keep South American Cichlids with African Cichlids is an outright No! These two are the most aggressive Cichlids around and they are known to fight for territorial control.

African Cichlids are found in popular African lakes such as Lake Malawi, Lake Tanganyika, and Lake Victoria. They are the most populous Cichlid species in the world.

Another reason you should not keep African and South American Cichlids together is that they evolved in two different continents and their immune systems are quite different. This means, when these different species are kept in the same tank, one can make the other sick.

Smaller fish that evolved from the same region are less aggressive, hence they can live safely together in a tank. 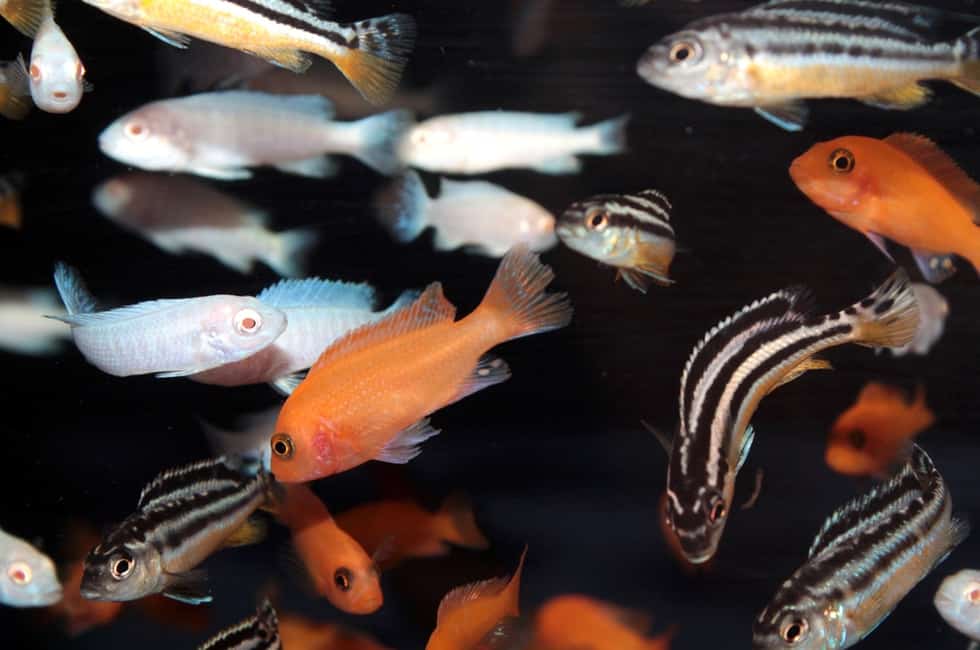 What Kind of Fish Can You Put with Cichlids?

Are you in search of the right type tank mate for your Cichlids? The golden rule is that you must only choose fish that will not bully or pick on the Cichlids.

It is believed that most Cichlids will get along with fish species such as Tetra, and Corydoras Catfish, just to mention a few. The following table indicates the type of fish that work best with various Cichlids.

What Other Fish Can Live with African Cichlids

Are you looking for a species of fish that will be compatible with African Cichlids? Choosing tankmates for African Cichlids requires some careful consideration because of the aggressiveness of the species.

Despite their aggression, they are the most colorful cichlids you will find. Since they are used to a rocky habitat, it is quite important to provide some caves and put some rocks in the tank for them.

Some of the best fish to keep with African Cichlids are;

It’s OK to keep Botia fish with African Cichlids because they are semi-aggressive, hence they can hold their own territory and avoid conflict.

The Botia also like to hide in rocks and caves and they are bottom feeders, hence they will keep away from African Cichlids for most of the time.

The Red Tail Shark is a very beautiful, sleek fish. It is also a semi-aggressive fish that can hold its own territory, hence it will be a great tankmate for your African Cichlid. Red Tails also like rocks and vegetation, but make sure that your tank is large enough to provide sufficient space.

Giant Danios can also hold their own against the aggressive Africa Cichlid. Danios are most active in the middle and bottom of the aquarium, and they prefer vegetation. You therefore need to keep some plants in your tank to keep them active and out of trouble.

The African Red Eye Tetra can quickly grow quite large, so you need to ensure you have a big enough tank.

The species also prefer the same water condition as the African Cichlids (7-8.0 pH or slightly alkaline), hence it can be a successful tankmate for your African Cichlids.

The Pleco is also an ideal tankmate for African Cichlids, especially if you want to spend less time cleaning the tank. The Pleco spends most of its time at the bottom of the tank, thus giving the African Cichlids plenty of space to move around and they won’t often fight.

The Scavenger (Upside down) fish enjoys hiding in the tank, just like the African Cichlids and that reduces the chance of them coming into contact with each other.

The scavenger also enjoys sandy-bottomed tanks with lots of plants. It is quite normal for scavenger fish to hang upside down, so don’t worry if they do this!

The Leopard Bush fish is equally aggressive and that makes it a great match for the African Cichlid. Leopard fish enjoy tricking other fish into thinking they are just a piece of leaf in the water. They do this to prey-swim and attack smaller fish.

The tankmates you must avoid when keeping African Cichlids are:

As a beginner, it is important to learn about the African Cichlids behaviors, before thinking about raising them. Below is a table showing their profile.

African Cichlids are predominantly found in the Rift Valley region of Africa. They are mostly known for being aggressive and for preferring slightly alkaline water. 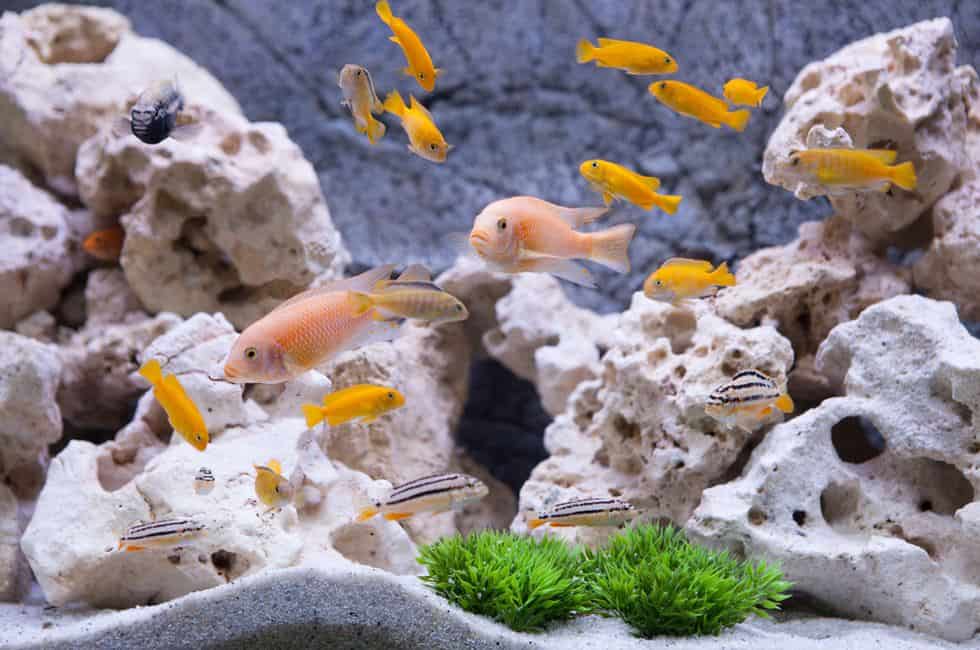 I’d advise against a beginner keeping African and South American Cichlids together, as they can be very difficult to cater for, due to their aggressive nature.

The South American Cichlids on their own, however, are very gentle and would be a great start for beginners.

The best Cichlids that beginners can keep in their fish tanks are:

The Convict Cichlid is perhaps the best African Cichlid for beginners. They are breed-ready and hardy in nature, and the females procreate easily with little assistance. Beginners should start raising these Cichlids with a single breeding pair. These fish should only be kept in an aquarium with its own species.

The main difference between Firemouth and Convict Cichlids is that Firemouth spawns at a slower pace which means there will be fewer fries in the aquarium.

The Firemouth will co-exist with most Central American Cichlids but they should not be raised with non-aggressive species.

The Kribensis Cichlid is slightly smaller, hence beginners can keep them in a small to medium size tank. This species has beautiful colors and they are not as aggressive as other African cichlids.

They enjoy living in groups and navigating through caves and tank decorations. It should be noted that this species does well mostly in soft water and they can be secretive in nature.

The German Rams are just as aggressive as any other African Cichlid. Their striking colors make them some of the most attractive Cichlids around.

They are easy to breed and they enjoy moving their heads back and forth. They love to escort their fries all over the aquarium. Since they breed easily, you may want to reduce their numbers in a medium or small tank.

Oscars are much easier to manage in a larger aquarium. They possess large fins and their bright orange color makes them very distinctive.

Oscars can be kept in pairs, and unless their tank mates are small enough to eat, they are not aggressive. However, they might be aggressive during feeding time.

It is also important to keep tank mates of equal or almost-equal sizes together. Often bigger Cichlids are tempted to eat small ones, especially when the smaller ones are not as aggressive as the larger ones.

Regardless of the preferred water conditions of each fish species, it is important to keep the tank well-maintained at all times. Even Cichlids that prefer slightly alkaline water will still survive in pH close to 7.0.

It is important to change 10% of the tank water on a daily basis, to reduce alkalinity and to ensure that there is sufficient CO2 in the water.

All dead plants and damaged tank decorations must be removed as soon as you notice them. If necessary, you should consider the use of filters in your tank.

I am informed, that is amazing..