Ever checked your aquarium and wondered why your goldfish is turning white? Is it normal or should it worry you? We have created this article to answer these and more related questions.

What does it mean if my goldfish is turning white? Well, there are numerous reasons behind the color change. Some of the most common include:

We will look at the causes in detail in subsequent sections. So, you want to know how these causes affect your fish color. Read on for more detailed answers.

What causes a Color Change in Goldfish?

As earlier mentioned color change is natural and can be triggered by changes in water conditions. Moreover, certain fish illnesses can also trigger the phenomenon.

While this shouldn’t cause alarm, it would be prudent to consult a fish specialist should correcting water conditions fail to reverse the condition. So, let’s look at what triggers the phenomenon.

When goldfish are young, they are either dark or brown in color. This is due to the presence of cells known as melanophores that contain melanin. According to fish experts, the dark color helps the young ones to blend with the environment and hide from predators.

Naturally, as the fish ages, the color turns to yellow or orange. This happens when it is about one year old. So, if your fish is this old, then there is no cause for alarm. Nature is taking its cause.

In fact, if you did more selective breeding, you can seamlessly predict when the color change will happen. Additionally, more expensive specimen tend to ape the color of their parents, therefore, it is easier to tell whether the color change is triggered by aging.

Unfortunately, the cheap specimen is difficult to predict the cause of the condition.

If you have increased the amount of light they are exposed to, they will naturally become white. In fact, you should check whether the position of the tank has been changed. Taking the tank to a darker area will correct the condition without much hassle.

However, do not isolate them entirely, aim for a position with normal lighting. Doing so will facilitate the healing process.  So, check the location of the tank: if exposed to extra sunlight move it to another place. If this doesn’t do the trick, could be the phenomenon is triggered by another condition which takes as to point number three.

Goldfish is a very sensitive fish that reacts to slight changes in the water. And color change is one of the signs that something has changed. This can either be the water temperature or pH levels. In fact, introducing new tank mates or adding decorations can trigger the condition.

Check the water temperature and pH levels to start with. This will tell you the margin of the change and correcting the condition will be easier. If you had introduced a new tank mate or decoration, this could be the cause. Naturally, goldfish will adjust to the changes in the long run.

Although it will take a while for the fish to get back to its normal color, there is no cause for alarm. They possess pigment cells dubbed chromatophores that react to changes in water conditions, sunlight, diet, and temperature.

In addition, poor water conditions can significantly trigger the condition. Increased ammonia, nitrites, and food waste can hinder the fish’s ability to control cell pigmentation. Therefore, check if the water is polluted. If so, filter the water and always remember to change 25-50 percent of the water once a month.

Well, too low oxygen levels are harmful to your fish. Not only does the color change but it significantly reduces its immunity becoming susceptible to illnesses. You should conduct a simple test and if the levels are low should change 60 percent of the water immediately. This means that the chances of your fish survival will be higher.

Alternatively, you can place an air stone in the aquarium to increase the oxygen levels. Whichever method you choose, ensure you conduct it swiftly to save your goldfish.

This is the part where you should get really worried. As earlier mentioned, goldfish is sensitive to minute changes and sickness can trigger color change. In fact, telling whether the sickness is the root cause of the phenomenon is quite easy.

Why? Because a sick fish shows various symptoms such as lack of appetite, inability to swim, wandering aimlessly in the tank and seeming dull all the time. If the color change is accompanied by the aforementioned symptoms, your fish is sick.

You need to consult a fish expert for treatment. Additionally, check the water conditions such as temperature, ammonia, nitrites, and pH levels. If either is amiss, correct it. Alternatively, change a huge amount of water.

If you feed your fish with only one type of food or a handful, could be it is not getting the right nutrients hence the color change. To correct this, feed your goldfish with a varied diet. Carotenoids are responsible for the orange, red or yellow pigments on a goldfish.

However, it cannot produce the pigments on its own. As such, it requires carotenoid-rich foods such as carrots, spinach, and peas.

Supplementing the diet with these foods will greatly improve its color. Although deficiency of carotenoids cannot cause the fish to turn entirely white, your fish might become dull or pale.

Those are some of the reasons your goldfish is turning white. We would recommend keeping expensive specimen since it’s easier to predict when the color change will occur. Again, position the tank far from excess sunlight and always check the water conditions of the tank.

Why is my goldfish losing color? 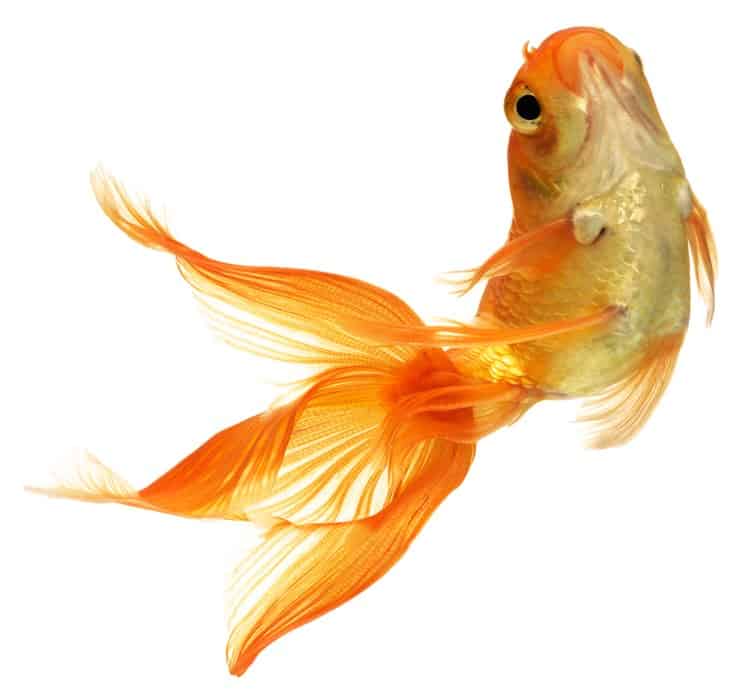 How do you know when your goldfish is dying?

Naturally, goldfish is a very fragile fish that can die very easily due to minute conditions. However, this should not be an excuse since most deaths occur due to the negligence of the keeper.

Before buying a goldfish, you should keep in mind that, the fish requires optimal care for it to thrive. So before look at the signs of a dying fish, let’s highlight the causes

Symptoms of a dying fish

So, what should you look at if your fish buddy is on the blink of death? The most common signs include:

A goldfish will naturally spend much of its life at the bottom of the aquarium. It is a natural instinct of hiding from predators. However, a very sick one will often spend its time on the surface signaling inability to swim.

Moreover, it might swim sideways or upside down which is an indicator of swim bladder disease. You can feed it with daphnia to ease the digestion. The goldfish will recover with time.

Well, this diagnosis is similar to humans. An extremely ill person will refuse to eat or naturally become incapacitated. This is similar to goldfish: it will rarely eat or even swim at the surface of the water tank to feed.

This is due to stress or a change in water conditions. For example, high ammonia levels increase the toxicity of the water which tempers with its feeding habits. To correct this, install a heavy filtration system and change at least 60 percent of the water.

Eye problems can range from subtle symptoms to bulging eyes which is a clear indication that your fish is ill. Look out for mucous around the eyes or a cloudy film. This is however difficult to witness. So what causes these problems? They can be caused by a vitamin deficiency or Popeye.

The sick fish should be quarantined and treated with antibiotics. Alternatively, you can feed it with a vitamin-rich diet.

There are numerous physical symptoms that an ill goldfish exhibits. They include open wounds that are red in color, tightened skin that indicates internal swelling, ragged fins, or small spots among others. The causes of these complications vary from parasitic to bacterial infections.  Treatment is through anti-fungal, anti-bacterial or parasitic treatment.

Well, this is the most common indication that your fish is on the blink of death. The fish will typically spend much of its time around the surface gulping air bubbles. Lack of enough air significantly inhibits the fish’s immune system hence an increased risk of death. Avoid overcrowding the tank and also ensure the tank is clean and conditions are optimal.

Do goldfish need sunlight to live?

No! Goldfish do not depend on sunlight for survival however a slight exposure will help. In fact, if you live you fish in the dark for too long, it will become very dull and almost loose its skin color. Some have even gone blind.

Expose it to artificial light or slight sunlight. That way, they’ll be happy and there’ll be no algae in your tank.

Can a goldfish turn white?

Yes! There are numerous reasons why as discussed above. Continued exposure to excess sunlight, poor diet, poor water conditions, aging and change of environment are some of the conditions that can trigger color change. Therefore, conduct water tests to ascertain the root of the cause.

Goldfish turned white overnight. What could be the cause?

As previously mentioned, goldfish are very sensitive fish reacting to minute changes. As such, it could be the change in water conditions overnight caused the color change. Check on the pH and temperature levels.

Could you have introduced tank mates or new decorations? Then, this could be the cause. Fortunately, the fish will adjust with time and get back its normal color.

My goldfish is turning white and losing scales. What is causing this?

Goldfish do not molt – losing scales – like most fish. As such, losing scales and color is a cause of alarm. This can be caused by toxic water that corrodes the slime coat which increases the risk of infections that can lead to scale loss and also color change.

You should exercise great caution when handling goldfish since they are fragile fish. Always ensure that the water conditions are optimal and the tank is free from waste. If the fish extremely ill, consult a fish expert for appropriate treatment.