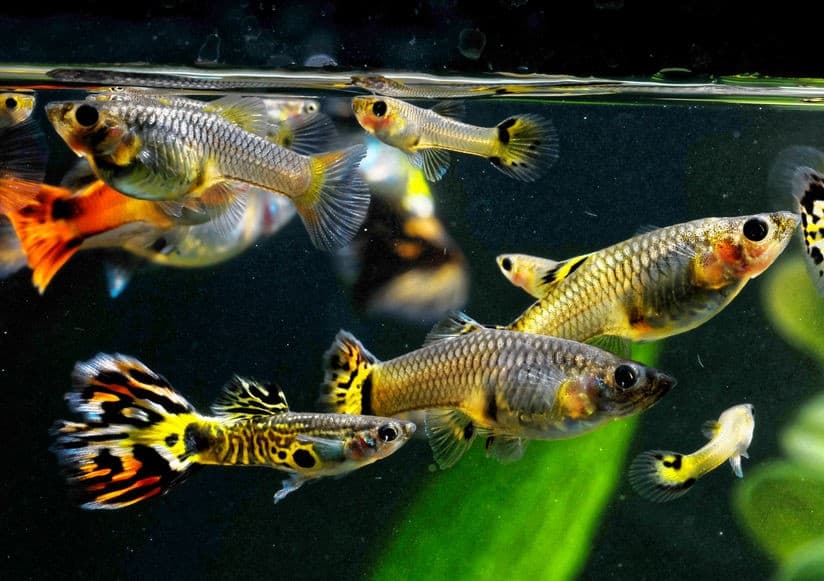 Many people have the challenge of knowing what kind of fish to introduce into their aquarium. Guppies (Poecilia reticulata, popularly known as millions fish or rainbow fish) are one of the most popularly loved species of fish that are preferred by aquarium owners, and this is obviously understandable.

Are Guppies Schooling Fish? Yes, Guppies are naturally schooling fish, that is, they are a species of fish that naturally stay together and swim in the same direction in a coordinated manner. So, guppies live and thrive when amongst a group of the same species, and not in isolation.

Guppies naturally have a really attractive and colorful appearance that adds life to a fish tank. They are active swimmers and generally easy to take care of.

Thus, new and even experienced aquarists favor having guppies in their fish tank. But before introducing them into your aquarium, you have to know their nature. For instance, it is often asked if guppies are schooling fish.

So if you’re considering having guppies in your fish tank, or you already have them, you must understand their nature for them to thrive successfully. Guppies are a freshwater aquarium fish that like to be kept in groups.

As for schooling fish, you should, therefore, have a few of them cohabit together in your aquarium. Also, since they are relatively small, having at least three in a five-gallon capacity tank is a good way to start.

In addition, guppies are active, colorful fish and they effortlessly bring life to your aquarium when they dart back and forth as they characteristically do.

Because they move in large groups in their natural habitat as a means of protection, you should also keep them in groups of the same or similar species.

Also, since guppies love to swim back and forth and keep themselves busy, they require a good amount of space. Your aquarium should be quite spacious to accommodate at least three guppies comfortably. They are also very peaceful, so you need not to worry about them attacking one another. This makes them also easy to care for.

In addition, it is often asked if guppies are shoaling fish. Guppies of not like to swim individually, but instead they thrive when within a friendly shoal.

Shoaling in fishes differ from schooling, where fishes in a shoal form a social group, and swim together in a sort of connected but independent way. Fishes usually shoal for social reasons with other fish that bears some semblance to themselves, especially in size and appearance.

Guppies show obvious shoaling in the fact that they are compatible with different types of fish. They shoal comfortably with fishes such as tetras and pictas. They form social groups and are quite friendly with other fishes in an aquarium.

However, guppies naturally shoal with other guppies and there’s always a close distance between a guppy and another fish while swimming. But whether it is a guppy or not, a guppy would shoal fine with any similarly friendly fish, but more likely a fellow guppy.

Colour and Sizes of Guppies

Guppies have a very colourful and beautiful appearance. They are usually covered in a variety of bright patterns and stripes in every color you can think of. They are a relatively small fish, ranging between 0.6 inches to 2.5 inches.

There are actually several varieties of guppies, with different shapes of tails. Mostly their tails have a wide flare, like a fan, or like a flag. They are often more colorful than the body.

The males are typically more colorful than the females and are easily distinguishable by looking at them. Some guppies have a plain color, while many come in bright patterns.

Guppies are a naturally peaceful breed. They do not attack themselves and are really suitable if you’re just starting up on your aquarium. However, you shouldn’t let them cohabit with other aggressive species which could attack or eat guppies.

Since guppies are omnivores, that is, they feed on plant and animal matter, you need not to fear them eating each other. They are also a hardy species, and they get along with other community of fish pretty well. So, although guppies are not aggressive, you still need to be cautious of what type of fish you keep with them.

What Fish can be kept with Guppies?

Many aquarium owners often ask if different species of fish can be kept in a guppies’ fish tank. Well, of course, some other species are compatible cohabiters with guppies. However, your tank size must be big enough to accommodate them comfortably.

The more species of fish in your tank, the bigger your tank should be. Generally, you should avoid keeping fish that are bigger in size compared to your guppies, because they would naturally see them as weaker ones and might harm them.

The first species of fish you should consider keeping with guppies are even more guppies. Yes, since they are a schooling fish, having them in more numbers can be a great option for your aquarium, particularly if you’re just starting.

One other fish species that are really friendly with guppies are tetras. Guppies and tetras are fish of the same species and they generally ‘school’ together.

Many aquarium owners keep them together naturally because they have similar natures and get along very well. Another kind of fish suitable to be kept with guppies are Swordtails.

They are also a peaceful breed and are quite easy to take care of. They are generally good community fishes and coexist well with different species.

Larger fish in the tank can harm guppies

Plecos and Ottos have to be small in size so that they don’t act aggressively towards your guppies. Larger fishes have a tendency to view small fish as food, so they should be avoided.

Just so, Cichlid species can equally be kept in the same tank with guppies if they are small in size. When they are big, they might be aggressive.

In addition, Mollies are equally compatible tank mates with guppies. They are quite small and do not grow beyond a certain level. They are similar to guppies in many ways and are easy to keep as well.

Rasboras are also good community fishes that can be kept with guppies, they generally get along with different kind of fishes. Not only can guppies cohabit with fishes, but other water creatures such as the Nerite snails are also equally safe. Your aquarium can be kept lively and interesting when you have a variety of fishes and water creatures in your fish tank.

How long would your guppies live?

Okay, even when you seem to have gotten the hang of it in keeping your guppies healthy and happy within a safe community, you should know that guppies don’t have a very long lifespan.

But before you begin to go worried, you can be assured that they reproduce pretty quickly as well. Male guppies and female guppies easily identify each other for reproduction, and they need no help in reproducing frequently. Guppies generally live for about two years before they die. However, they could die prematurely due to some mistakes.

Note that guppies are very sensitive to the quality of water they live in. If the water is contaminated, too cold or warm, or lacks oxygen, it can be harmful to your fishes. Guppies thrive in good and stable water conditions.

The water should be kept at room temperature and must be changed frequently and cautiously so as not to shock the guppies.

Naturally, they thrive in freshwater aquariums but in their natural state, they live in brackish water, which is a combination of freshwater and saltwater. For your aquarium, however, ensure that the water is well oxygenated at all times, or else the guppies might suffer harm.

Furthermore, you must be careful about the water you put into your aquarium. Tap water might not be suitable for a guppies fish tank because it contains chlorine which is harmful to the fishes.

Ensure that your water is well conditioned before introducing it into your tank. If you are using tap water, you may leave it outside for about 24 hours or more, so that the chlorine may evaporate. However, ensure the water is returned to room temperature before pouring it in your aquarium.

Finally, guppies are a great option for your aquarium and are quite easy to take care of. They are peaceful and not aggressive. They equally thrive well either in a shoal or in a school with their own kind.

It’s breeding characteristic also makes it quite economical and they are just perfect for a new aquarium owner. All they require are good, careful treatment in a safe and stable environment for them to give the perfect aquarium.