The appeal of the guppy fish can easily be attributed to its beautiful and colorful appearance. It is arguably one of the most attractive fishes in existence. In addition to this, the guppy fish is relatively easy to keep, making it an ideal fish for the beginner and even experienced fish keepers.

Can guppies live with goldfish? Yes! In fact. Just that you would have to make some adjustment to the tank so that there can be a common ground for them to survive. It is quite common to find both of them at the fish pet store, so you might have wondered if guppies can live with goldfish.

This article would provide you with all the answers to your questions if you have ever imagined whether the goldfish can be kept with guppies.

We would now be comparing the compatibility of the goldfish and guppies. There are two similarities between them which are that:

How to Keep Guppies with Goldfish

In spite of this, there are still quite a number of differences between these two species.

Guppies are tropical fishes, which means that they can survive in temperatures up to 86 degrees Fahrenheit.

On the other hand, goldfishes are cold water fishes, and any temperature above 68-74 degrees Fahrenheit would reduce the oxygen content of the tank, thereby stressing them, and in some cases resulting in physical deformities, or even premature death. Also, the guppies can be stressed by low temperatures as well.

One of the other names for guppies is Million Fishes, and this is because they breed and spawn at a very fast rate, this might result in overcrowding of your tank.

Apart from this, the goldfish grows up to 10 inches and is an omnivorous fish, meaning that it enjoys both plants and animals as food. The average length of guppies is about 2 inches. Your goldfish might start to see your Guppy as a snack to nibble on after a while if they are kept together in the same tank as guppies.

The goldfish is known to produce a high quantity of bioload that might even make the water more acidic for your guppies, thereby stressing them.

How do you ensure that they live together

Set the temperature to a common value

Constantly Monitor the Ph of your Tank

You have to make sure that the ph in your tank is at least neutral, at a ph that is not higher than 7. This is the midpoint that would be suitable for both your guppies and goldfish. It is advisable to check for the ph in your tank first thing in the morning, or at night because there are mild fluctuations in Ph values during the day.

On its own, the goldfish requires a tank of at least 20 gallons; with the inclusion of the goldfish, the adequate tank size might increase up to 25 or 30 gallons because the guppies breed very easily, and you would not want them to overload your tank.

It is recommended that you get a filter for your tank and routinely filter because the goldfish are heavy producers of bioload, routine filtration would help to reduce this bioload that might otherwise affect the health of your guppies.

It would be helpful if you change at least 30% of the water in your tank every 2 weeks, this is also to reduce the quantity of bioload produced by the goldfish in your tank.

Routine water changes would help to improve the quality of the water in your tank. Although, you have to be careful when doing this because you might end up filtering more than the required quantity and this would result in an upset in the chemical balance of your tank. So make sure that you do not exceed the stated 30%, every 2 weeks.

Which other fishes can live with guppies?

The attributes required for a fish to be compatible with the goldfish include;

The species that are compatible with the guppy include:

They also have a peaceful temperament, making it easy for them to coexist with guppies. Also in contrast to the guppies that are top or midline swimmers, the corydoras catfish is a bottom swimmer, this would even ensure that they is no cause for fights.

In addition to their opalescent bodies that would help to make your tank more vibrant and colorful, harlequin rasboras are notably calm and they get along well with guppies. You only have to ensure that your tank is large enough because they are better left in groups of about 5.

The loaches are capable of peaceful coexistence with your guppies, they are very calm and are also nocturnal fishes, which means that they are active at night, while your guppy is inactive or resting.

Named so for their transparent bodies, glassfish would peacefully cohabit with your guppies since they also have a calm temperament. Though they have to be in groups of about 5.

These small fishes look so much like the goldfish in appearance that they are sometimes mistaken for each other, cases of interbreeding between them have also been reported. They are capable of peaceful coexistence with your goldfish.

What kind of fish can live with goldfish?

It is almost impossible to have never seen, or at least heard of the goldfish. The goldfish is the general name given to about 300 different species of fishes. Their bright colors have also made them quite popular in various aquariums.

The attributes for a compatible tankmate include

Suckers- Goldfish have a layer of slimy covering which is protective when this slimy layer is sucked off by fishes such as plecos and corydoras, it makes them prone to infections. 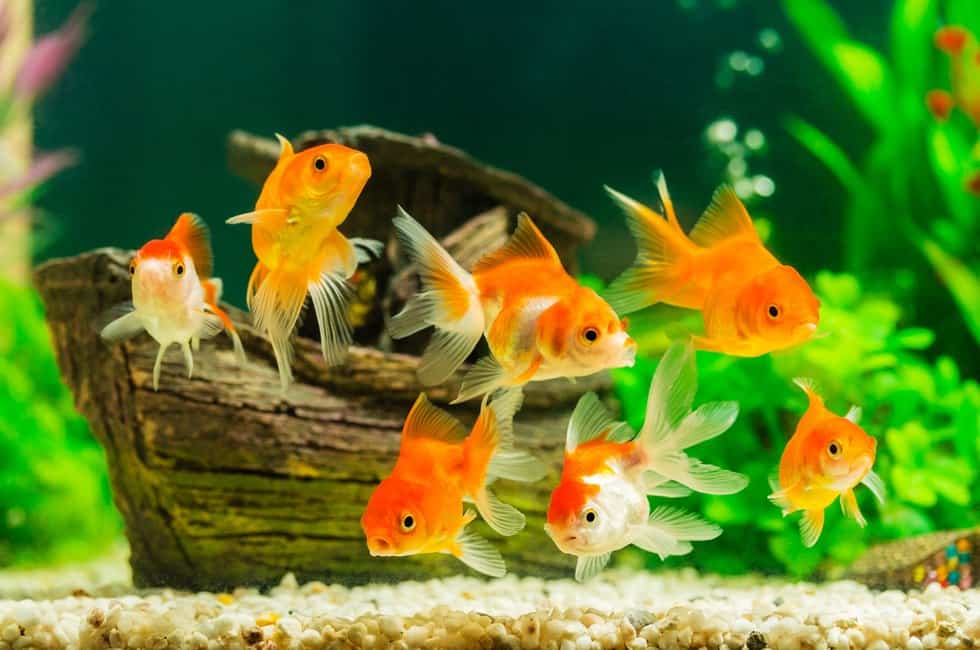 They would peacefully coexist with your goldfish because they are not aggressive. However, they are shoaling fishes and may need to be kept in groups of about 5.

Cohabitation between your goldfish and zebra danios is peaceful because they are both calm and have the same tank requirements, as zebra danios are also coldwater fishes. Although, they might be seen as prey by your goldfish due to their small size.

They are also cold water fishes and are very peaceful, so they good make an excellent tankmate for your goldfish

Loaches are calm and peaceful, so they are suitable tank mates for your goldfish. Also, they are too big to be seen as prey, so they won’t be picked on by your goldfish.

Although it is possible for guppies to survive individually, it is not so healthy for you to keep your guppies alone in a tank, because in their natural habitat, guppies are seen swimming in groups and have been found to thrive better when kept with other similar fishes.

You have to make sure that you do not keep too many guppies of the opposite sex in a tank because guppies breed quickly and easily and you would not want to overcrowd your tank. If this happens, you have to increase the size of your tank.

Can guppies live in pairs?

Yes, guppies can live in pairs. They have been found to flourish if they are kept together in groups. They are very active fishes that enjoy swimming in the same environment as other fishes of the same species or temperament.

Just make sure that the size of your tank is large enough. If you are not looking forward to a crowded tank, it is advisable to keep males in the tank, because even if you decide to keep females alone, female guppies have been found to effectively store fertilized eggs, so you might just have one pregnant female guppy in your hands!

Even though it seems like the goldfish and guppy are on opposite ends of the spectrum, they have been found to survive together if the tank is adequately maintained.

Although they would thrive better if kept in separate ranks if you are prepared to put in the effort required to keep them together, the arrangement might be effective, so you might as well get yourself two of the world’s most beautiful fishes!