For a lot of aquarists, there is usually the need to recognize which fish thrive as schooling fish, and which do not. Schooling fish are usually active and easy to manage since they swim in groups with other similar fishes.

Are platies schooling fish? Platies are not considered schooling fish, but they, in fact, prefer to be kept in small groups of about five to six similar sized fish. Being small in size and active, they can live and thrive in a peaceful aquarium and swim with other fishes around the middle of the water.

Platies are a commonly preferred choice of fish that many aquarists favor because they make good community fish and have a variety of beautiful colors that simply brighten up your fish tank.

If you are a new fish keeping hobbyist, then platies would be one of those fishes you would love to include into your tank. The question of whether platies are schooling fish or not is a most debated topic, many consider them schooling fish while many affirm that they are not.

There are different breeds and hybrids that give them bright and peculiar colors, ranging from white, red, green yellow, blue and some in patterns.

Being about three inches in size, with a sort of flattened side and small fins and a fan-like tail, they appear very peaceful and tolerant. Naturally, they love to stay around low current water bodies such as warm springs, canals, and marshes.

They equally prefer to stay in aquariums that are somewhat similar to their natural habitat. Many aquarists have platies as favorites because they are easy to care for and they make good tank mates for other species such as mollies, tetras, barbs, and guppies of similar sizes and temperaments.

Although they look small and gentle, platies are actually hardy fishes. They can survive in not too perfect water conditions and would generally eat anything they are fed with. In fact, being healthy eaters and omnivores, they could be seen to actively scramble after food meant for other fishes in the same tank.

They are not fussy at all and are not likely to suffer any frequent fish disease. As long as they are kept in good water conditions with a good diet, then you should have no problems with your plates. They generally live more on plant-based foods and would require that their diet is composed of plants and quaky fish foods.

However, they really don’t live too long, and they would typically live for about 3 years to 5 years if the conditions are very favorable.

Despite this hardiness, they are however not to be kept with aggressive fish which would harm them, or male species that would bite them. You should also take note that they are hardy breeders.

In a tank where there is a mixture of male and female platies, you would soon discover that you have a full tank. They usually require no help in getting along with each other.

Although it would be advisable that you keep more females than males since the males could develop more dominating traits and chase the females. In most cases, you might not know when the female platy gets pregnant, because they carry their eggs until they are born as live small fishes.

Thus the platies are known to be hardy fishes that love breeding and even breed with other different species of platies. As a result, if you don’t want your platies to breed you more fishes, you shouldn’t keep both sexes in the same tank. 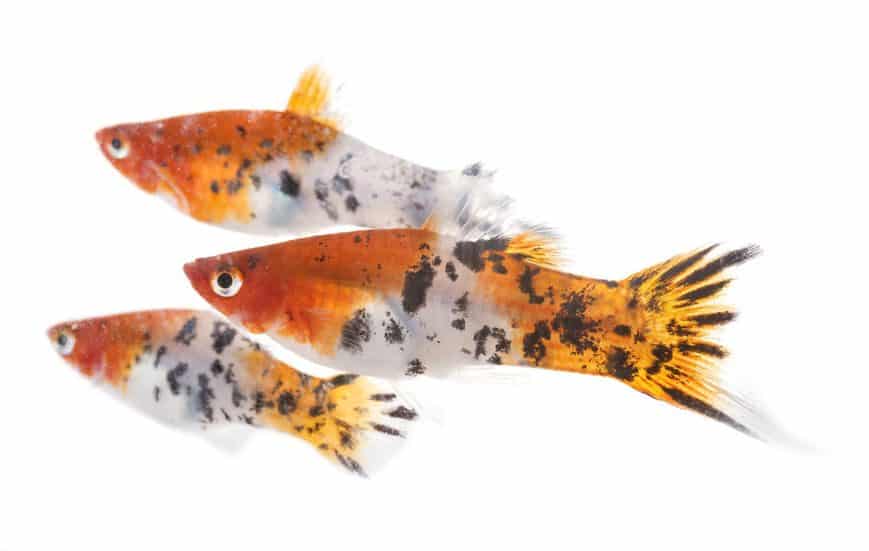 What fish can get along with platies?

As you now know, platies are peaceful fish and would do well in a community tank with other fish species. You, however, need to be mindful of the sexes of any of the fishes, knowing that males are usually more aggressive and territorial.

Bigger fishes also don’t get along well with smaller fishes, and in fact, platies have a tendency to eat their own fry. But the species that would be good tank mates with platies include; danios, guppies, cherry barbs, mollies, rasboras, swordtails, plecos, angelfish, amongst others.

Platies can even crossbreed with other fish types such as swordtails, and give birth to hybrids within a short while. You should, however, limit the numbers to what you can manage very well and what your tank can accommodate.

Fishes that would live comfortably with platies need to be equally friendly and easy to manage and share preferences in their water conditions. If you have a really big tank, you can keep a number of males of different kinds, as long as they can own and defend their territories.

Your platies would do better when there are more females than males, in a well-vegetated tank where there are ample spaces between plants for the younger ones to hide.

Since they reach maturity within 3 to 4 months, it should be easy to differentiate them when they are matured and know how to balance the females with the males.

Male platies in the same tank might not be really easy to manage for beginners because they might get aggressive with one another.

Can tetras live with platies?

Tetras are known to be good community fish and would be nice tank mates for plates. Caring for tetras, just like platies is quite easy as they are equal hardy. You should, however, ensure that your tetras and platies have similar sizes if they must live together.

Putting platies fry amongst tetras is totally unacceptable because they would be chased by the bigger tetras. You should also try to ensure that your male tetras and your male platies do not struggle for space or territories, if not they might become hostile to each other.

Note however that tetras are schooling fish and would hardly school with other fish types besides other tetras. So if you want to keep tetras and platies together, ensure that there are a group of tetras that can form a school successfully.

Can GloFish live with Platies?

Glofish are a peculiar species of fish that are considered a treasure to aquarists. Just as the name implies, they are known to glow brightly with a sort of fluorescent light that comes naturally and stays that way throughout their lifespan.

They are quite expensive and it is only natural to be careful of what kind of tank mates they would do well with. Glofish are also peaceful and can be kept in a non-threatening environment with Platies.

They are also good community fish like platies and can survive well with other species, as long as the water conditions are mutually favorable and healthy. You should, however, understand the temperament of the platies very well, especially the males, before introducing Glofish into their tank.

Since Glofish are quite fascinating, they might be chased by very active fishes. Actually, Glofish are seen in other species, thus you may find Glofish danios, Glofish barbs and others like that. Take note that Glofish sharks can display some aggression, and would be preferably kept in a separate tank by itself.

Bugger Glofish might naturally bully other smaller fish like platies at times. In essence, you have to discuss the temperament of your Glofish and Platies before buying them to be put in the same tank.

Glofish tetras and Glofish barbs would however mostly school peacefully with other fluorescent and non-fluorescent fishes that are friendly and similar.

Will schooling fish school with other species?

This question is perhaps the reason why many believe that plates are not schooling fish. This is because a school of fish is generally known to be a group of the same species forming a group that moves together in a coordinated manner and speed.

And since platies coexist peaceably with other fishes and swim with them, many do not consider them as a proper school. Schooling fish such as tetras would mostly school with only tetras and not other species, except in some peculiar situations.

And with the popularity of crossbreeding today, it is not strange to find different species looking greatly alike, causing them to school together successfully.

There is simply no unbreakable rule that fishes observe in their schooling nature, as the various characteristics result in different habits. Thus it is safe to say schooling fish do school with other species in many situations.