It doesn’t matter if you are a beginner fish keeper, or an experienced aquarist, everyone agrees that it can be quite fascinating to watch cute little fish swimming in a fish tank. These tiny fish are kept in tanks known as nano aquariums. The size of nano aquariums ranges from about 2.5 to 10 gallons.

In this article, we will discuss the best fish to keep in a 3-gallon tank.

A 3-gallon tank contains about 12 liters of water. Although too small for some fish, a few fish, such as the ones we will be looking at in this article, can thrive in a 3-gallon tank. To start with, we will be discussing the ways to maintain such a small tank.

You have to be very careful while maintaining your 3-gallon tank as there is a very thin line between your fish surviving and your fish thriving.

It is highly unlikely that you haven’t already come across a betta fish in a pet shop. Remarkably popular for their colorful bodies and long flowing fins, the betta fish is arguably one of the most attractive aquarium fish.

Although they can coexist with a few other fish species, only one betta fish should be kept in a tank, because the betta fish is not a sociable animal, at all. 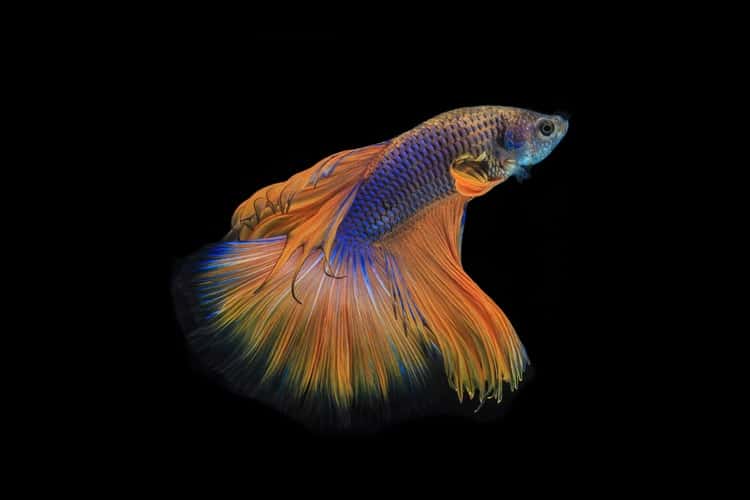 You should only keep one betta fish in a 3-gallon tank, to provide them with enough swimming space. Although relatively easy to care for, betta fish will grow up to 2 inches in length and you don’t want to overcrowd the tank as that would stress your betta.

Another reason why your betta will thrive in a 3-gallon tank is that they belong to a suborder of animals called Anabantodei, or labyrinth fish. This means that they possess a structure called labyrinth (in addition to their gills).

The labyrinth is a breathing organ that enables them to breathe in air through their mouths, making them able to adapt to an oxygen-poor environment.

Ensure that there is an effective filter and that the temperature is set to 74-78°F. Please note that although they will thrive in a 3-gallon take, a 5-gallon tank might provide a more effective swimming space for your betta.

The killifish refers to a group of fish that reproduce by laying eggs; although the least killifish is not a true killifish as it belongs to another family of fish called Poeciliidae, together with mollies and guppies. 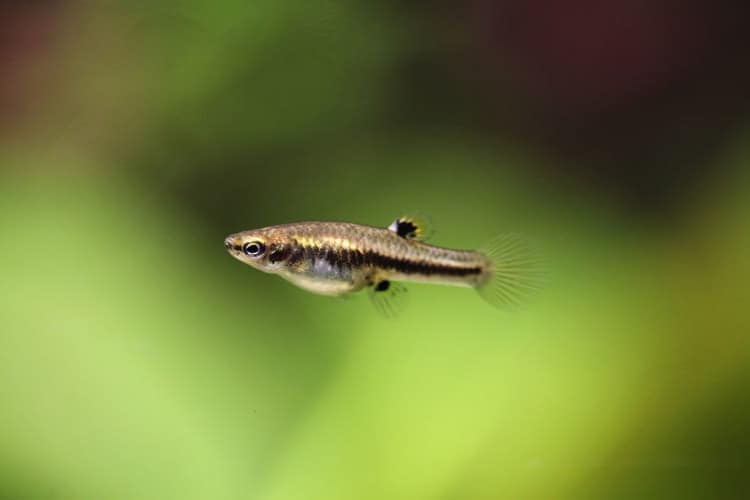 They are tiny, olive-colored fish that grow to about 1.5 inches in length. Caring for them is quite easy, though they can be quite hard to find in regular pet shops.

Their optimum temperature is from 68°-78°F, with a pH of 7-8. They can be very shy and you need to give them some plants to hide under.

You might end up with hundreds or even thousands of endless livebearers if you keep fish of the opposite sex together. To avoid breeding in your tank, it is advised that you only keep 2 or 3 endler’s livebearers of the same sex in your tank.

The males are usually smaller in size than the females with an average length of 1 inch while the females can grow up to 1.5 inches. They are very energetic fish that thrive in water that is pH 7-7.5.

This species of fish is native to Asia, particularly India and Bangladesh. Their average length is about 1 inch.

This species is probably not the best choice if you are looking for a vibrantly colored fish as their dull colors allow them to blend in perfectly with the environment in your fish tanks. However, they make up for their lack of color with their incredibly prominent whiskers.

Due to their passive nature and the fact that they are nocturnal animals, you probably won’t see them very often unless you are very vigilant!

The pygymi gourami is one of the smallest species in the gourami family with an average length of 1.5 inches. Their bodies are brightly and attractively colored. 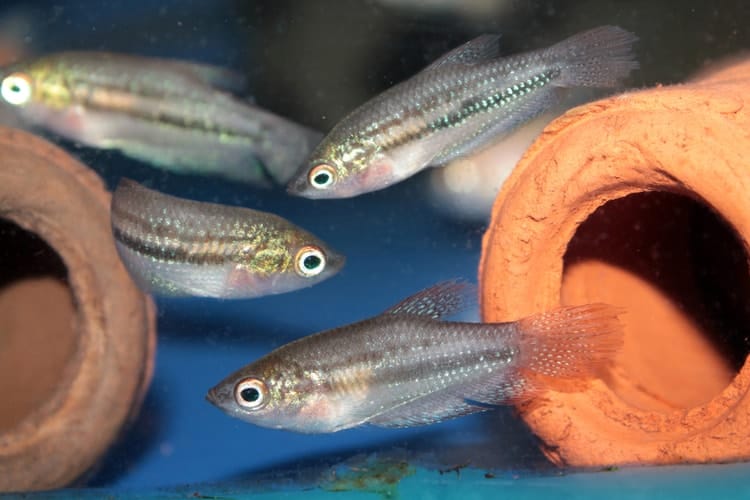 Like the betta, the gouramis are also labyrinth fish. They have a docile temperament and are relatively easy to care for. You have to make sure that they are kept in a quiet place as they are easily agitated by noise. They also lose their vibrant colors if kept in a place with too much light, so avoid light as well!

They thrive in temperatures between 77°-83°F, and a pH of 6-7.5. It would also be better to ensure that the tank is heavily planted.

This particular species is not fit for a community tank at all. Despite their small size of 1 inch, they can be territorial and aggressive towards other fish, making them difficult to keep in a community tank. 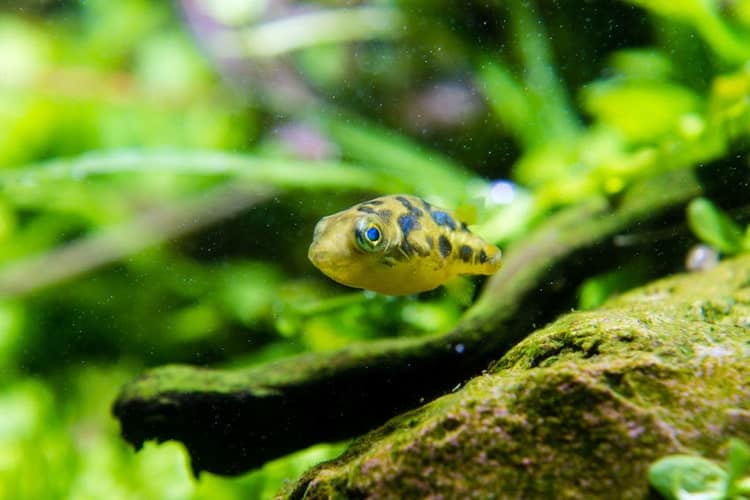 To ensure that they thrive in your tank, it would be helpful to include a few floating plants so that this adventurous species has somewhere to explore.

There have been reported cases of pea puffers jumping out of their tanks, so you have to be mindful of this if you are intending to keep them in an open top tank. Ideally, they like a temperature that is between 77°-79°F and a pH of about 7-7.8.

These are vibrantly colored fish with black and yellow stripes. In addition to being freshwater fish, all the fish that belong to this species, thrive as well—if not even better—in brackish waters.

They are very energetic and active. Although they are peaceful, they can be very aggressive towards each other. So it is advisable to keep only one bumblebee goby in your 3-gallon tank.

They are not easy to care for as they feed voraciously and might be underfed if kept with other fishes. Their optimum pH is about 7.4-8.2, and their preferred temperature is between 74°-80°F.

The scarlet fish is about 1.5 inches in size and their colors are usually in striking shades of red and gold. Though it has a peaceful temperament, it is advisable to keep only one scarlet gem in your 3-gallon tank as they can be aggressive towards other fish in the same species.

Their timidity and extreme shyness make them an unsuitable choice for a community tank, however your 3-gallon tank would be suitable for them so long as you ensure that they feed adequately.

They tend to thrive better in heavily planted tanks that afford them enough room to hide. Ensure that the temperature in their tank is between 74°-79°F and aim for a pH between 6.5-7.5.

Although a nano aquarium can be very attractive, it is important to note that effort is required to ensure that your fish thrive and not just survive. It is important to have at least a little experience in fish keeping so that you can successfully create the optimum, stress-free environment for your cute little fish!

How to effectively maintain a 3-gallon tank

In reality, a 3-gallon tank might be harder to maintain than a larger one, for a number of reasons.

Firstly, a 3-gallon tank is quite small and this makes it susceptible to sudden changes in water quality or temperature. Thus, you need to closely monitor your tank so that you can easily detect any changes in water parameters.

Secondly, you might underestimate the quantity of bioload that may be produced by these small fish. Well, they are tiny so they shouldn’t produce any significant bioload, right?

This is not true at all. And even if the bioload produced is insignificant, it could still quickly accumulate to dangerous levels that might prove to be harmful to your fish.

You need to filter the water (a sponge filter will do the job) to reduce the chance of these bioloads degrading the water and eventually stressing your fish.

Thirdly, you need to change at least 25% of the water every week, so that the quality of the water in your tank is maintained at a suitable level.

Finally, you need to include some floating plants, or other plants, in your tank, to give your fish some interest, and somewhere to explore.

I was looking up care guides for the scarlet badis and it was saying that they need at least 10 gallons. I'm not sure what to do about this.

Can i keep a dwarf gourami in a 3 gallon tank

Hello! I'm sorry to say, but no, you cannot. Dwarf Gourami require at least 10 gallons.