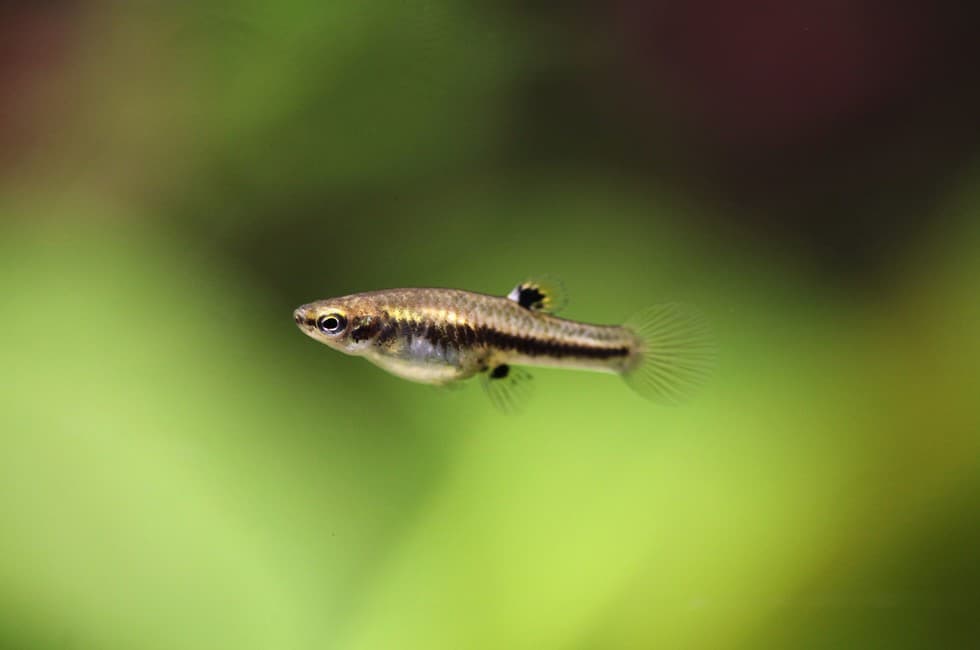 The Least Killifish, or the Dwarf Livebearer, Mosquito Fish, or Dwarf Top Minnow, is one of the most sociable fishes out there that you can domesticate. They are shy and peaceful. They can adapt to almost any water type; can eat anything you give them to eat. Naturally bred in the south-eastern United States and can bred anywhere else.

They can survive in any body of water. They can be found in shallow and densely vegetated waters and even brackish water. You can recognize them with their olive colouration and dark stripe that runs laterally across their body. They may also feature a dark spot on the dorsal fin. This spot could be red in some types.

The Healthiest Diet for Your Least Killifish

Luckily for most fish keepers, Least Killifish are omnivores, and as such, they can eat anything and everything you put in the fish tank. However, the diet for Least Killifish must contain vegetable matter so that it can browse for algae. You can also give them live and frozen foods like shrimp.

They’ve been known to attack shrimp as a gang to feed on them. Because of their small size, it is advisable that you crush flakes and other larger food items before feeding them. They can eat anything that can fit into their mouths. They also eat worms. Their feeding regime should be at least once or twice a day.

They usually spend the rest of the day browsing on the floor of the tank for organisms to eat. That is why you should ensure that your tank has natural vegetation to ensure that there is a natural climate for the growth of such organisms.

If you prefer to feed them with a defined and trusted set of foods, the following things you can be used to feed your Least Killifish are Brine Shrimp (they are a good nutritional source and a favorite for Least Killifish), Daphnia (they can be cultured or collected from open ponds, but should not be used as exclusive food source as they have laxative effect).

Mosquito Larvae: they can be collected seasonally from ponds or cultured by leaving a container of water to become green with algae, as long as you don’t allow them to grow full cycle into mosquitoes.

The algae you also get from the pond will also serve as a feeding supplement for the fish, Tubifex Worms (these can be bought from stores, but can carry diseases. To reduce the risk of your fishes contracting diseases from eating them, rinse the worms thoroughly in cold water in a shallow tray).

Black Worms (similar to Tubifex worms, and easier to get because some companies cultivate them to sell for profit) and White Worms (a good food source, but should not be the exclusive source since it is fatty).

When you have fry, the most suitable things to feed them are newly-hatched brine shrimp, vinegar eels, micro worms, infusoria, and grindal worms. Least Killifish can live for more than 3 years. Generally, Killifish can live up to 5 years.

The water in the tank should be fresh water, at least 5 gallons in volume and should always be at the temperature of 66 – 70 Degrees Fahrenheit.

Anything above 70 might lead to a serious imbalance in the sex ratio, affecting their ability to effectively reproduce, resulting in the non-viability of your fish population.

You can also keep them in hard alkaline water, gotten straight from the tap. If you use this, ensure to add a little dechlorinator and aquarium salt. The additional salt will help them stay in better health and prevent fin clamping.

The water hardness should be between 120 – 160ppm. The tank should also have a filter to break down toxins before they enter the water so that the fish do not contract diseases from the external environment.

Under no circumstances should you keep Least Killifish with large or predatory species; except you want the Killifish to become a quick snack for the other aquatic animal.

However, they can safely share a fish tank with Pencilfish, Dwarf Corydoras, Otocinclus catfish, freshwater shrimp, Endler’s Livebearers, aquatic snails, Pygmy sunfish, Bluefin Killifish, and Swamp Darters. However, these fish generally prefer to be the sole masters of the tank if possible.

Because there are generally shy, Least Killifish will only begin to stay in open water when they feel comfortable and at ease. So, don’t feel alarmed if you see them huddling in corners of the tank, especially when newly introduced. They will take their time before mixing up with other species.

Even when fry is introduced, they tend to stay close to the floor of the fish tank, leaving the adults to stay at the top. Ideally, they prefer nano tank environments. When they share tanks with larger mates, they tend to hide for the most part of the day.

That’s more reason why you should ensure that the tank has underwater plants that can provide a natural shade for them. Some plant options are the Amazon Sword plant (Echinodorus grisebachii) and the Windelov Java ferns (Microsorum pteropus ‘windelov’).  For best results, keep in a tank with just one plant species.

Breeding comes easily for them as long as both genders are cultivated together in the right ratio. Ideally, the female population should be double the male population. Gestation periods last up to four weeks before they give birth to fry. They give birth continuously and not in broods.

The females cannot carry many fries at the same time due to their small size. This is because they reproduce through a process known as ‘superfoetation’, that makes it possible for fry at different stages of development to be present at the same time in the uterus.

The females can give birth to as many as 40 fries within a 10 to 14-day period. To encourage this, the natural outdoor conditions of the fish should be maintained, especially when you’re keeping them in a tank.

If you have more than one female in the tank, you’ll get used to seeing new fry, every day or two in the tank. The tank should be well planted to provide shade and hiding place for the fries before they are ready to mix up with the adults.

Newly born Killifish are quite capable of taking care of themselves and learning the ropes. The adults also do not pose a threat to the young ones, so you don’t have to bother separating the young ones into a separate tank.

Least Killifish can survive in almost any water body since they are very hardy. To cultivate them in a tank, you have to ensure that the tank effectively simulates their natural conditions, in terms of water hardness, vegetation, temperature, and all other necessary factors. For tanks, the ‘MarineLand 5 Gallon Portrait Glass LED Aquarium’ is a great choice available on Amazon.

To achieve this, these tanks have to be heavily planted and be gently filtrated to keep the water flow at minimal levels so the fish can live peacefully. The tanks should also be equipped with sponge filters set with low air flow.

The reason for this that the fry can be so small when born, that they might end up sucked away into the box filters, hence the need to set it with low air flow to minimize the risk of this happening.

Killifish are generally very good jumpers. For this reason, you have to ensure that you cover the tank with a secure hood, so they don’t jump out to their own peril.

Due to their small size, they can jump through small spaces, hence the need for a tightly secured hood. The tank should have a lot of floating plants to provide a natural underwater shade.

The best plants are cryptocorynes, since they do well with low levels of lighting. The tank can be bare at its floor, but most people like to use dark gravel for its flooring. If you want to use gravel, there are several variants. Whatever option you go with, make sure you go with one that will not harden the water.

The gravel flooring will provide a natural habitat for the fry to scavenge for food. If you intend to use bottom spawners, don’t floor the tank with gravel. Instead, use peat as long as it doesn’t contain fertilizers or additives.

You should also provide some hiding places for you Killifish, which can be in the form of floating plants, rocks and wood. The effect of all these is to ensure that the fish tank feels just like a natural pond for the Least Killifish.

How large should my stock of Least Killifish be when starting out?

The larger, the better. Or at least, as large as your tank comfortably take. The adequate tank should be at least 5 gallons. This is because inbreeding frequently happens amongst Killifish.

If you start with a small stock, the negative effects of this will show up faster in terms of a drop in male reproductive performance, lower offspring viability and slower maturation time of both males and females.

Can I add newts to my fish tank with Least Killifish?

Absolutely no. It’s easy to fall under the assumption that killifish are too fast to be caught by newts or that newts are too slow to hunt in open water.

Neither assumption is accurate. In less time than you might think possible, introducing newt to a fish tank where you already have killifish or the other way around, will only lead to the decimation of the killifish population. At best, Killifish should be the sole occupants of the tank or the types of fish earlier mentioned in the article.

Do I need the experience to keep the Least Killifish?

Because of their unique needs, you should have at least 2 years of fish keeping experience before experimenting with Killifish variety generally. If you don’t have this, ensure that you work closely with those who have kept Killifish or read the books written by experts in the least Killifish breeding and caring.

Are Killifish dangerous to keep?

No. Least Killifish, like other members of the Killifish variety, are peaceful. The misconception might be due to the ‘Killi’ in the name. ‘Killi’ is actually a Dutch word meaning ditch of channel.

Where can I buy Least Killifish?

You can get them from your regular fish or pet stores or online. You can also get them from hobbyists or breeders or at auctions. At these kinds of forums, you can make valuable connections to give you advice, especially if it’s your first time.

However, it would be advisable that if this is your first-time keeping fish, do not start with Least Killifish. If you must, ensure that you look out for a Killifish enthusiast group to join so you’ll be supported and have access to advice when you need it.