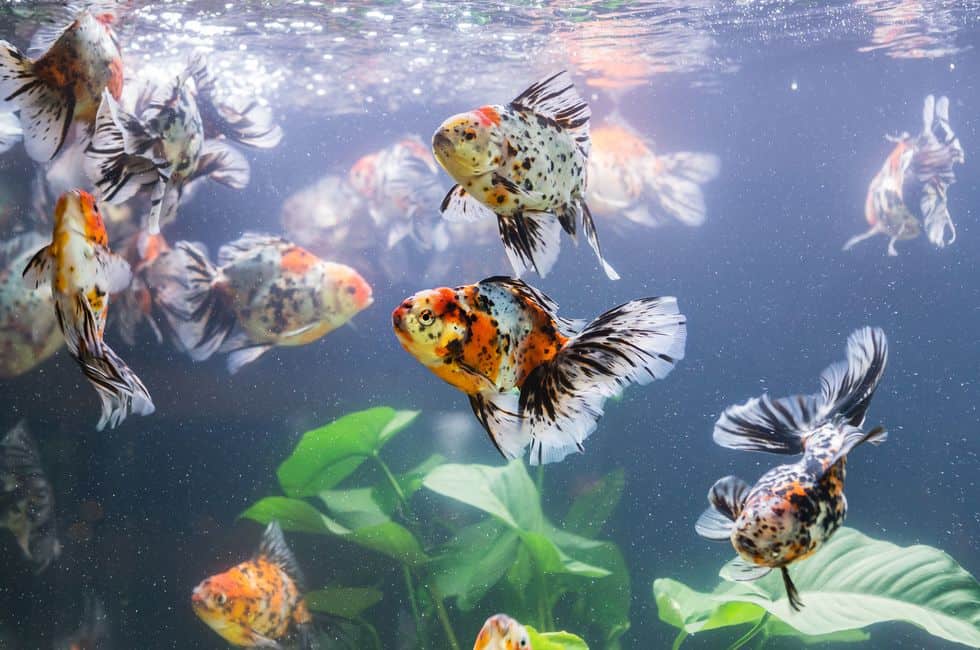 Getting to know if goldfish eats each other is a question that can only be answered by research and a pragmatic approach. Without mincing words, the short answer is no, goldfish don’t eat each other. Naturally, goldfish are not aggressive and basically, they are not predatory. However, there is some exception to this nonpredatory nature.

Goldfish tends to browse for food, eat mostly bite-sized morsels of things that are edible. If it happens that they come across small fish, a very good example is a baby goldfish, they may not be able to discern, and will they will definitely eat it if it’s in their reach.

When breeding, goldfish tends to produce hundreds of sticky eggs. They are not the type that exhibits parental care irrespective of the fact that the eggs are theirs.

The eggs that manage to survive and hatch into baby goldfish will continue to live uncertain life till it grows larger, either falling prey to other goldfish or some other insect such as dragonfly or larvae

The good thing for the baby goldfish is that once they are able to swim around, and they have reached a reasonable size of 2-3 centimeters, the rate and the possibility of falling prey drops dramatically.

Can goldfish attack each other?

It’s always a sad experience when you look into the goldfish tanks only for you to find them tearing each other’s fin and pursuing another fish around the tank after the necessaries must have been put into place.

This can definitely wreak serious havoc, looking at the sight of a belligerent fish trying to kill others can cause serious frustration and helplessness as a fish keeper.

Generally, goldfish have a moderate temper and they are easy to rear if proper consideration is put in place. But there are situations that will just occur probably due to change in their environment or some other contributing factors.

Goldfish can always bring up a contentious character, if an injured or sick fish is noticed, to them is a sign of weakness and they will gang again that particular fish and tear it up just to forestall any further calamity from affecting others in the community. 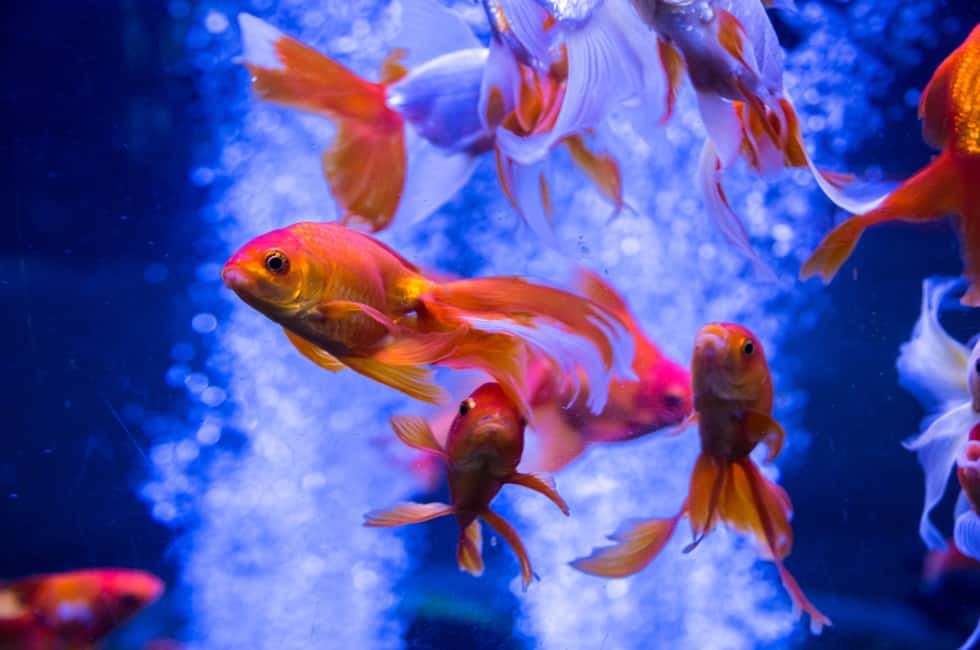 As a fish keeper, the best way to go about this is to put the sick fish in a quarantine tank, and also advisable for the fish to be in a smaller volume of water where the other will not be able to harm it at all.

Technically an overcrowded tank can make goldfish become edger and have the feeling that they have to battle for living. To prevent this, ensure there is a sufficient amount of water in the tank. You can follow the general rule thumb by supplying 20 gallons of water for the first fish, and 10 gallons for each additional fish.

Breeds such as Ryukin goldfish has a more pointed head shape than other varieties which give the edge in attacking others. Such fish should not be kept in the same place with docile species because they prevent the docile ones from getting a fair share of the food and make a serious attempt to assert it’s dominance through physical means by attacking

In deciding whether goldfish are cannibals or not, goldfish are social animals who also enjoy living in groups, they find it easy to make interaction with other fishes belonging to their species. Considering the availability of adequate care and attention, ordinary goldfish can be tamed.

Once they get used to the face of the fish keeper, they will swim freely to him and the hand feeding will be very possible without showing any trait of cannibalism. Smaller goldfish naturally try to avoid any form of human contact, but once they reach a middle size or mature goldfish their fear ceases to come into place

If goldfish are transferred to the tanks of other goldfish, a common goldfish will not exhibit any act of cannibalism, rather it will familiarise itself and make good companionship with its new tank mates by rubbing up against the body of its new acquaintance.

Schooling is a term for the behavior fish exhibits when it’s still new, but as soon as it’s able to adapt to the situation, the behavior eventually ceases and every individual will be able to explore the aquarium independently

Hierarchy while feeding occurs in the sense that the larger goldfish eat most of the food. However, a smaller goldfish may have to battle with the larger ones in competing for the larger portion. This may not necessarily lead to cannibalism, but rather an indication of a healthy goldfish.

Why do Goldfish Bite Each Other?

Generally, goldfish have their own unique personalities. Some are shy while some tend to be overactive. Largely goldfish likes being hand-fed in the tank. Peradventure if it happens that your goldfish starts to display some aggressive character, such as biting each other in the tank.

The next step you are to take is to find out the reason why all these are happening. Reasons, why goldfish can become aggressive and start to bite, is based on the fact that he’s sick, mating or not feeling comfortable in the tank due to insufficient space.

To prevent this, avoid aquarium overcrowding, this can lead to poor quality of water, most especially because goldfish excretes larger amount of waste in a day if there is not sufficient space, the fishes might become stressed

Ensuring good quality water is also a way to consider if the water is dirty and has poor quality, goldfish becomes aggressive as a reaction to their unhealthy living condition.

Routine water changes should be carried out once a week. Replace the water with fresh ones that have been treated using a water conditioner, frequent water changes will ensure the growth of good bacteria and ensure cleaner water

This is one of the most important reasons why goldfish do bite each other, underfeeding should not be encouraged. Goldfish do not have stomachs, once they are fed, the food does not really stay for long in their body because they excrete as much as possible.

Underfeeding may give goldfish an aggressive nature such as attacking and biting tank mates in the attempts to get edible food. Regular feeding which is 2-3 times a day and feed as much as they could consume within 2 minutes. Take for instance if you are feeding vegetables or pellets, remove any food that your goldfish have not eaten after two minutes.

Mating rituals should as well be considered, you are biting each other may not occur at all if you notice your male goldfish running after the female in the tank, that’s definitely indicating that he’s ready to mate. If you need a goldfish  babies, you can leave him to mate, but if you do not, you can carefully remove the male and put him in a separate tank during the breeding season

What kind of fish can be kept with goldfish?

Basically, goldfish are desired by aquarium enthusiasts who want to keep a school of fish. However, to prevent potential problems you must be careful in selecting tankmates for your goldfish, getting to choose the right species will go a long way in creating a harmonious aquatic environment.

The things you must consider are as follows;

Goldfish are freshwater dwellers, which automatically prohibit and saltwater fish from being the tank mates.

Although goldfish are tropical, then they can’t really survive in warm water. Ideally, you should try all possible best to keep the temperature 65 -75 degrees Fahrenheit. In selecting the tank mates for your goldfish, fishes that require warmer operations are not always a better option.

Ensure that alkalinity and acidity of the water should range from 7.0 to 8.0 so as for the newly introduced fish will be able to survive the strange environment.

Lastly, for goldfish lover, the best option you’ve got is to introduce some other goldfish to your tank. They are omnivorous predatory fish that maintain a good living with others sharing the same species. They will definitely live well with others most preferably if they are of the same size and variety.

To wrap it up because they are not natural predators, they tend to it smaller fish, based on probability, newcomers may likely become dinner instead of viable tank mates.