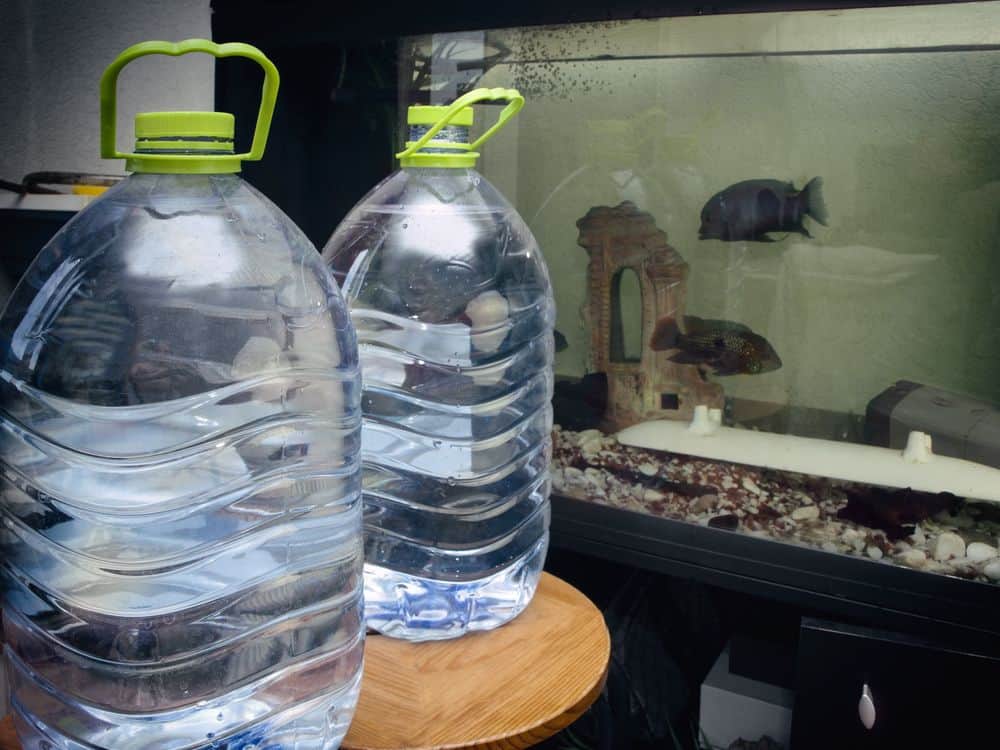 Are you wondering how to remove chlorine from water? Before adding your fish to the tank, it is very important to get rid of chlorine from the water. It causes lots of problems – the high acidity can quickly kill both freshwater fish and alkaline water fish.

How Long Does It Take for Chlorine to Evaporate Out of Water? Water needs to sit for a minimum of 24 hours to dechlorinate. It can actually take almost 5 days for chlorine to evaporate completely from the water, depending on the initial concentration of the chlorine, and the total volume of water.

I recommend this Water Test Chlorine Strips and this Water Conditioner which removes Chlorine. (Link to Amazon)

Chlorine at a level of 2ppm (parts per million) in about 10 gallons of water will take up to 110 hours to completely evaporate. It is important to note that certain conditions such as ultraviolet light, aeration, and proper circulation will speed up the evaporation process.

You may want to put the water outside inside the sun to reduce the time it takes for the chlorine to evaporate.

Is Tap Water Safe for Fish after 24 Hours?

Tap water is suitable for freshwater fish because it contains sufficient oxygen and minerals. But it may not be safe for saltwater fish species, or fish that prefer alkaline water conditions.

Tap water should be safe for fish species that prefer slightly acidic water conditions, but the fish must be introduced into the tap water slowly. This can be done by adding the water to a bag containing the fish and leaving it for about 20 minutes, before fully introducing the fish into the tank.

It is important to dechlorinate water before adding fish to your tank. Tap water will require some water-plants, even after dechlorination.

Does Leaving Water out Remove Chlorine?

Most of the chlorine in the water should have evaporated after it has been left to stand for 24 hours. If you want to speed up the process, you can use a de-chlorinator or conditioner.

De-chlorinators and water conditioners can remove 100% of the chlorine, making the water completely safe for fish, in less than 24 hours. Get this Chlorine test kit (Link to Amazon) to test the water for chlorine elimination.

Water that has not been filtered contains harmful chemicals that may harm the fish. The good news is that the dissolved chemicals, including chlorine, can be removed by using certain recommended water softeners. The use of water softener with Granulated Activated Carbon (GAC) can effectively remove chlorine in the water.

One recommended powerful chlorine removal, recommended for fish tank owners is the KDF-55, which is granular in nature, and is capable of removing large amounts of chlorine.

It is important to place this chlorine remover inside a media guard. Chlorine-free water will eventually pass through the softener, once the remaining minerals have been eliminated.

Do you ever wonder if boiling the water will remove all the chloramine? Chloramine is less acidic than chlorine, as some of its hydrogen molecules have been substituted with ammonia.

When water is just left to stand overnight, chloramine does not evaporate as easily as chlorine. However, boiling the water removes it faster than chlorine.

Boiling is the fastest way to eliminate both chlorine and chloramine from water. Boiling 10 gallons of water for about 8 minutes will eliminate 1ppm of chlorine from the water. Chloramine, on the other hand, will take much longer because it is much more stable and does not evaporate easily.

Are you wondering if boiling water can actually remove chlorine from the water in the tank? The answer is Yes! You should consider boiling chlorinated water for about 20 minutes.

It is believed that boiling will create sufficient heat and aeration to eliminate the volatile chlorine in the water.

The boiling method is most suitable for smaller quantities of water. If you are trying it for larger volumes of water (e.g. 10-15 liters), then you will have to boil in batches.

Heat is known to reduce water’s ability to hold dissolved gases. While 1ppm of chlorine will be eliminated from 10 gallons of water after between 3.5 minutes and 8 minutes of boiling, it will take 60 minutes to remove chloramine from the same volume of water.

Some Other Ways to Remove Chlorine from Water

The size and type of aerating pump will depend on the size of your tank (in gallons).

Make use of a Carbon Filter to Remove Chlorine and Chloramine

A carbon filter is not only useful in providing clean, potable water in homes, it can also be used to remove chlorine and chloramine. The activated carbon is that special filter media that removes organic compounds or matter alongside chlorine and other chemicals. Check this Activated Carbon on Amazon.

Ascorbic acid naturally neutralizes chlorine gas, and is one of the quickest dechlorination methods. To use ascorbic acid, simply add 1 tablespoon to 1 gallon of water. This means you need to use as much as 10 tablespoons for 10 gallons of water.

Sprinkle ascorbic acid on the surface of the water and gently stir. Since it does not dissolve in water, it will precipitate chlorine out to the surface. Ascorbic acid is an easy, economical way of removing chlorine – it isn’t expensive, and can be found in most pet stores.

Ascorbic acid will eliminate both chlorine and chloramine, without depleting the amount of dissolved oxygen. This will be beneficial for both the fish and the plants inside the tank.

This may be one of the most expensive ways to remove chlorine from water, as you need to find a UV light source.

The precise level of UV light you need will depend on the amount of water (in gallons). The strength of the UV light and the level of organic matter in the water will also affect how long the dechlorination process takes.

In most cases, you should consider treating chlorinated water with a UV light wavelength of at least 254 nanometers and radiant energy density of 600 milliliters per 1 square cm of water. One of the benefits of using UV light is that it will eliminate both chlorine and chloramine.

Regardless of the type of chlorine removal method you choose, you need to get a chlorine testing kit, to check the water both before and after treatment. The levels of chlorine in the water will determine the extent or time duration of the treatment.

If after the treatment, you are getting a much lower chlorine reading, then your system is working. If not, you will need to find an alternative chlorine removal option.

You should also consider choosing a system that eliminates both chlorine and chloramine. Many tank owners ignore the presence of chloramine in water and this will negatively affect the fish in the tank.

It is important to monitor a fish inside a new tank for about 2 hours to see if it reacts negatively to the water, this will help determine whether chlorine levels may be causing low pH.

7 thoughts on “How Long Does Water Take to Dechlorinate?”